Home
Movies
No Gorr the God Butcher In Thor: Love and Thunder Trailer 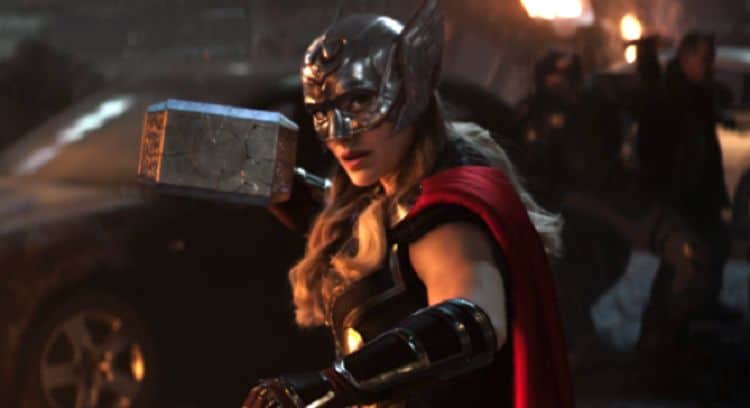 Well, it has finally arrived. The first teaser trailer for the upcoming Thor: Love and Thunder trailer is here. But guess what? No Gorr the God Butcher. That’s a little disappointing, but let’s not forget that this is only a teaser. And holy smokes, what a teaser it was. From the song choice, to the tone, to the interaction between Thor and Star-Lord, everything just looked amazing. And the very last shot was a good look at Natalie Portman as Jane Foster, but in her Mighty Thor form. This will be the first time Portman has appeared in an MCU movie since Thor: The Dark World back in 2013. It’s certainly been a while for her and not too many fans were itching to see her character again. However, if Taika Waititi was able to convince her to come back, then she had a good reason to reprise her role.

Last I checked, Christian Bale said he was done playing comic book characters after he completed his time playing Batman in the Dark Knight trilogy. That’s arguably all he needed to do, but then again, that’s just DC. Why stop there when you can have the best of both worlds? In this case, he is playing a far less popular character, but he’s also playing a villain. This is very intriguing to me, because I have no doubt he can play a great villain like he played a great hero.

Gorr the God Butcher is a fairly new character for Marvel Comics, but he is an interesting one. As the name implies, he hunts down gods and kills them. You can imagine how that would cause some trouble for Thor and now, it will be a serious problem for Jane Foster’s Thor. Boy, this will be an exciting battle, but I’m still dying to see how he looks. We didn’t get a look at him in the teaser, but he will surely turn up in the next trailer. I can’t wait to see him, but it’s probably good they’re saving him for the actual trailer. If they’re going to bring in a character like this and played by Christian Bale no less, you have to make that moment stand out.

While we haven’t seen his official look in a trailer yet, we have seen Gorr the God Butcher as a toy figure. The first is a typical action figure with the picture on the package gives us a good look at him. And if you’re like me and collect lots of Funko pops, you’re in luck. The Funkos for Love and Thunder have been leaked and my god, they look absolutely glorious. I have a feeling I’m going to be spending a lot of money soon. Hey, that’s okay, because it’ll be money well spent. It’s just a collector’s habit.

From the way Gorr looks in the action figure image and the Funko, I think we have our definitive look at the character. He actually doesn’t look too much like the Gorr from the comics with the black hood and the tendrils hanging from his face. The Gorr we’re seeing for Love and Thunder looks more like one of those guys from Mad Max. He’s tall and slim, all white skin, and completely bald. He also has that so-called “mysterious” black sword in his hand. For you Marvel nuts out there, you know the story behind it.

Just to be clear, I’m not so confident his sword, popularly known as All-Black, will introduce the symbiotes to the MCU. That technically already happened when Venom crossed over in the main MCU universe. But hey, maybe it will set it up for the whole race to make their debut. And perhaps we can actually see a little backstory behind this Necrosword, which involves Knull, the evil deity who actually created the symbiotes. This could set up Gorr as a far more interesting character than just a god-killing antagonist.

But how do you all feel about his look for Love and Thunder? I still think he looks like a Mad Max goon or a lesser Quan Chi, but I’ll have to see him in action first. I do much prefer his look in the comics because it looks more intimidating. His look in the movie makes him look more generic. I’ll forgive that if he’s a menacing villain, but I’ll once again point to Christian Bale playing him. No matter how he looks, I’m confident Christian Bale will make this character one of the best MCU villains. What are your thoughts, Marvel fans? Better put some cash aside for the Funko figures.

When will the next trailer come? I don’t know, but it better come soon. After this trailer, I’m so hyped for Love and Thunder. I have to watch it again just to sink in the song mixing in with the action. Total ’80s glory.