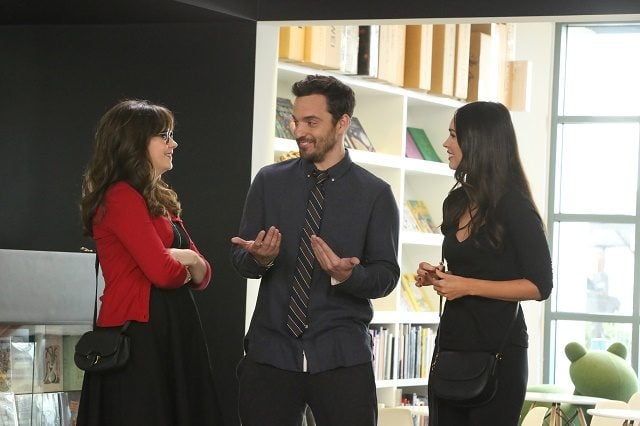 It’s really quite funny how refreshing this week’s episode of New Girl is. There’s nothing super original or unique about “Glue”; New Girl has done plenty of stories before involving characters getting accidentally high or drunk before huge events in their lives, and Winston is so incredibly goofy now that his overly complicated proposal plan isn’t a surprise at all. However, all these familiar beats and rhythms are what make “Glue” such a welcome return to form for the series; instead of focusing on characters or relationships that have long since reached their expiration date (aka Jess and Robby), this half hour turns its attention to the main loft gang members, splitting Jess, Nick, and Reagan and Schmidt, Cece, and Winston into two separate storylines and doing what this series does best: telling goofy, heartfelt stories that make us laugh but also care.

Perhaps the most important thing that “Glue” does is bring Jess back into the fold. Her storyline with Nick and Reagan certainly doesn’t fix all the problems that Jess has had as a character this season (many of them stemming from her up-and-down relationship with Robby), but it does allow her to finally feel like Jess again and provides fans of the Jess/Nick friendship (and romance) with some terrific moments, as Jess helps Reagan deal with Nick’s insecurities after he receives a rejection letter from a major publisher. Throughout this story, the New Girl writers do a fantastic job of reminding us why and how Jess and Nick work so well together as a pair, as she knows him better than almost anyone else in the loft, and it also gives Nick his first major challenge in his new career, which had to happen sooner or later since his path to being a writer seemed way too easy up until this point.

As I mentioned above, what happens with Jess and Nick, who get high by sniffing the glue they use while making copies of The Pepperwood Chronicles, isn’t new territory for New Girl; we’ve seen this type of story before. However, it’s impressive how much restraint the show’s writers have throughout “Glue,” as Jess being high could have been such an easy opportunity for her to reveal her renewed feelings to Nick, which would have created a drama-filled love triangle between her, him, and Reagan. Instead, though, Jess and Nick’s glue-induced behavior is mainly mined for stupid laughs, such as Jess tipping over when she attempts to carry all the copies of the book out of the loft, or Nick’s complete breakdown at his reading; similar to the time that Nick, Cece, and Coach got high in Season 4, there’s no real stakes here, and this plot is just an excuse to have Zooey Deschanel and Jake Johnson be their most hilarious selves.

Where the real emotion does reside, though, is in the Jess and Reagan part of this storyline, as it becomes clearer and clearer that Jess understands Nick and all of his weird, manic quirks better than his current girlfriend. Jess seems to know that she’s a better fit for Nick than Reagan, but true to her words from earlier this season, she expresses her love for Nick as a friend rather than making any type of grand romantic gesture. Meanwhile, Reagan feels out of her depths throughout much of “Glue” and consults with Jess about how to solve pretty much every Nick-related issue, but there’s no moment of realization during the half hour in which she acknowledges that Jess obviously cares for Nick as more than friend. Instead, Reagan remains blissfully oblivious to Jess’s true feelings, even after Jess provides her with an example of the pep talk that she would give to Nick, and to Reagan’s credit, she finds her own way of inspiring Nick, telling him that she believes in him.

However, just because Reagan’s words work in this instance doesn’t mean that she’ll always be able to handle Nick’s issues. “Glue” doesn’t shy away from showing how and why Jess and Nick are right for each other (just like the raisins moment from the end of “The Hike”), and I wouldn’t be surprised if there’s some type of reunion between the couple before the Season 6 finale. There are still seven episodes left this season, and I can’t picture Nick and Reagan remaining together for all of them.

One New Girl couple that doesn’t appear to be in any trouble though is Winston and Aly, who are just as wacky and wonderful as ever in “Glue,” even though they have limited screen time together. Most of this week’s episode features Schmidt and Cece distracting Aly from what they believe is Winston’s planned proposal, and so much of the humor in “Glue” comes from the increasingly insane lies that the newlyweds use to keep Aly from finding out about what Winston is doing, particularly when Schmidt and Cece try to pretend to have marital problems.

Of course, since this is Winston we are talking about, his Malibu picnic date with Aly is only phase one of his elaborate engagement plan, and while Schmidt and Cece are definitely frustrated with him, they also can’t help but be charmed by the level of thought and care he’s putting into his proposal to Aly. Plus, not only is this misdirection extremely funny (I couldn’t stop laughing at the play-by-play commentary from Schmidt and Cece as they waited for Winston to get on his knee and give Aly her ring), but it’s also very fitting for Winston’s character. This is the guy who always has to go too big or too small with pranks; you think that his proposal for his girlfriend is going to be any less crazy and complicated? Not to mention, after the big step that Winston and Aly took together in “The Hike,” it’s good to see that New Girl isn’t trying to rush them into anything too serious. Let them be their odd, goofy, non-engaged selves till the Season 6 finale at least.

After a couple of mediocre episodes, “Glue” is a return to form for New Girl in what has been its most uneven season to date. Sometimes, when a show is struggling, it’s best for it to just go back to its roots and do something familiar. That’s exactly what New Girl does with “Glue,” and it results in one of the best episodes of the season.

Jess and Reagan try to help Nick sell his book after he gets rejected by a publisher in a strong episode of New Girl.