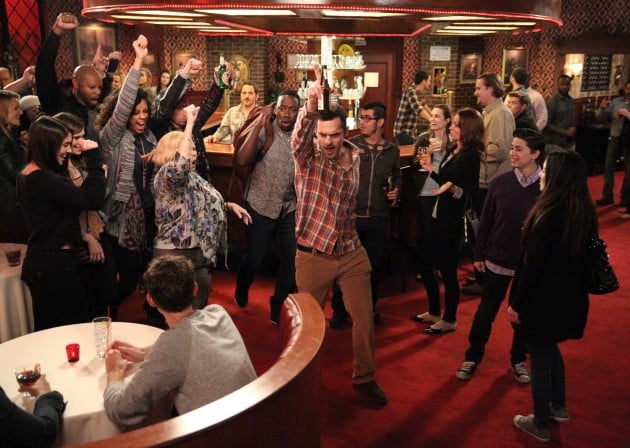 Valentine’s Day is this weekend, which means that a relationship-focused sitcom like New Girl had to have an episode tackling the romantic holiday. Thankfully, “The Crawl” was one of the best episodes New Girl has produced this season, giving all of its characters (even Cece!) a great moment or two, as the series pulled off the difficult tightrope act of balancing hilarity and heartbreak.

Still reeling from his break-up with Kai, Nick convinces (or should I say he guilt trips) the rest of the group to join him on Valentine’s Day night for the epic bar crawl that he has supposedly been planning for a decade. While none of the members of the loft are particularly eager to go, they understand how badly Nick is hurting right now and recognize that they need to be there for him, so Jess invites Ryan, Schmidt leaves Fawn’s party early, and Coach, Winston, and Cece also tag along for a night of drinking and debauchery.

Throughout it twenty-two or so minutes of running time, there’s no denying how fun “The Crawl” is. This is New Girl at its most weird and wacky, as if the show were doing an episode-long version of True American. Nick becomes the leader of the loners on Valentine’s Day, Winston has a bag full of supplies (including a small stick and a biography on the Wright brothers), Coach terribly tries to flirt with a woman he meets at the bar, and Cece gets completely and totally drunk in an attempt to “out-drink Miller.”

The most obviously serious story is about Jess and her relationship with Ryan, who asks her to move in with him, a request that Jess doesn’t immediately say yes to, causing the couple to reexamine their relationship. Jess’s hesitation here makes sense; Ryan’s the first really good, caring guy she’s been with since Nick, and she’s allowed herself to open up with him, to really feel. Her concern over them possibly moving too fast (not to mention she may think living with Ryan may trigger something negative, like living with Nick did) is completely valid, and it allows for the two of them to have an honest and real conversation, at least before Ryan gets a call saying he’s been offered the headmaster job at his old school in England.

Even though he says the he’ll turn it down, Jess encourages Ryan to take the position; this is his dream job, and she doesn’t want to hold him back. Besides, they can still date long distance, and it’s Jess’s belief that this can happen (born out of the same closeness and connection that caused her initial hesitancy at moving in with Ryan), along with Zooey Deschanel’s fantastic performance, that make this one of New Girl‘s most heartbreaking scenes in a while. Jess and Ryan are both so desperate to cling to this one good thing that they have in their lives, at least for one more night, that they ignore the insurmountable distance and the endless hours of travel and keep reassuring each other (and themselves) that this will work, even though they know it won’t.

And while Jess and Ryan’s situation is certainly the most overtly emotional of the hour, it’s not the only story that packs a punch. Even though she doesn’t admit it, Cece begins to realize that her feelings for Schmidt are coming back; she watches Fawn publicly declare her affection for Schmidt mere minutes after he had just told Cece that the first Valentine’s Day the two of them spent together (three years ago, when she took a chance on him) made it become his favorite holiday.

Additionally, Coach’s initially shallow attempts at trying to hit on May become something real after he discovers their shared history (they were both army brats–which I don’t think we ever knew about Coach before–and they both lived in the same places, only a few years apart). After considering that something serious could happen with May, Coach ditches her, telling Winston that he doesn’t want anything that real right now, that it scares him. Thankfully, Winston literally slaps some sense into Coach, who decides to take a risk and try things with May, but she’s not going to make it easy for him, only providing him with her email, not her phone number, instructing that he must write and send her a good email before they can go out on a date.

However, while both Cece and Coach’s storylines are quite effective, it’s Nick finally cracking outside the last bar on the crawl that was the biggest emotional gut punch of the night for me. Maybe it’s because Jake Johnson is such a good actor, who can quickly switch from slapstick comedy to real, authentic drama on the spot, but Nick telling his friends that he’s not cracking, “I’ve just got nothing to do,” was the most saddest and most honest moment of the episode, a scene that not only served as an emotional breaking point for Nick, but also as another fantastically genuine display of friendship between New Girl‘s characters.

Much of New Girl‘s fourth season has seen Nick at a loss for what to do after his break-up with Jess, as he has fallen into old and bad habits. His partnering with Schmidt has certainly been a step forward for him towards maturity. However, Kai refused to recognize and appreciate Nick’s evolution; in his eyes, her decision to dump him devalues the progress that he is making, leaving him with only the worst parts of himself.

But that’s why Jess, Winston, and the rest of the gang are able to cheer Nick up in the final scene of the episode, because they know that there’s so much more to him than his worst impulses. They know how great of a friend he has been to all of them, and they value that friendship and are happy to reciprocate it, providing Nick with the validation, care, and love that he, and many others, seek each and every year on Valentine’s Day.

– I was originally going to give this episode nine stars, but it gets ten for finally using Hannah Simone and using her well. Drunk Cece is my new favorite Cece.

– Drunk Nick is also one of my favorite versions of Nick. He should show up more and act like Hemingway again.

– Mike, Nick’s gay co-worker who pretty much hates everyone, returned in this episode, and if his presence leads to more lines like “Mike, I love you cause you’re gay and cause you’re dangerous” and more moments like Mike recognizing that his crush on Nick has returned, I want him in every episode.

– Schmidt fondly remembers his and Cece’s first Valentine’s Day: “We did all the things that R. Kelly raps about.”

– Winston carries a small stick in his bag, and he doesn’t need to explain why. “It speaks for itself.”

– “Your mouth is writing a check your body can’t find.”

– “Sparks are flying like the Wright Brothers between you two. I would know that because I have their biography in my bag.”