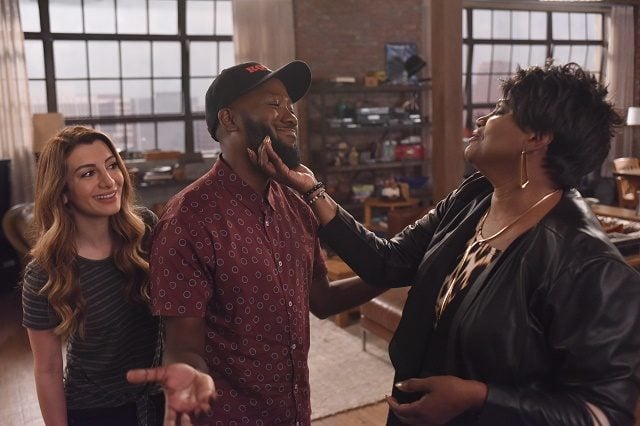 While this week’s New Girl isn’t exactly the follow-up to “Socalyalcon VI” that I was hoping for or expecting, it’s still another solid episode of the sitcom that pushes this year’s main stories forward as we head into Season 6’s final two episodes. Following last week’s realization from Jess, I did want to spend more time with her in Portland, and I wish what we did see of her was less of a comedic Misery homage (the episode’s title comes from the Stephen King novel and film) with her dad and more about her dealing with her emotional struggles involving Nick. However, New Girl does provides us with that wonderful final scene between Jess and her dad, in which she finally opens up to him about the real reasons why she doesn’t want to return home yet, and Bob tells Jess that it’s now time for him to take care of her. It’s a sweet and funny scene that holds a lot of promise given the fact that Rob Reiner will be returning as a guest star in next week’s penultimate episode, “San Diego,” and also due to the fact that we already know that Bob has very complicated feelings about Nick.

While last week’s episode was the time for Jess to have a realization, this week, it’s Nick’s turn, as he comes to the conclusion that he wants more from a relationship than what he and Reagan have right now. Both of them initially found their relaxed, minimal-talking dynamic to be ideal at the start of their relationship; however, with each passing episode, Nick is beginning to understand that he wants to be with a woman who takes the time to tell him things about her life, both big and small, and after finding out about Reagan’s ballerina background and her new promotion from her work friends at a party the two of them attend together in “Misery,” Nick acknowledges that he and Reagan might just not be the right fit for each other.

Similar to Jess’s epiphany in last week’s episode, Nick recognizing how big of a problem his and Reagan’s communication issues are has been a long time coming. Neither of them have ever been able to talk to each other in a mature and honest way; they always need someone else to give them a nudge or a push, and that person has almost always been Jess, even going back as far as the New Girl Season 5 episode in which she helps the two of them admit their feelings for each other. The most development that we’ve seen from Nick and Reagan as a couple has been offscreen during their summer together in which Nick finally wrote his novel, and even then, Nick still dedicated the book to Jess, hinting at the fact that she’s always been more of his emotional inspiration than Reagan ever has.

Furthermore, Nick’s realization in “Misery” is just yet another major step in the continuing evolution and maturation of his character, a journey that I would argue was set into motion by his and Jess’s break-up at the end of Season 3. Since Nick and Jess went their separate ways, Nick has been more focused on bettering himself, and we’ve witnessed that in both his personal and professional lives. Having that conversation with Reagan about how upset he is over their lack of communication is not something the older version of Nick Miller would have ever done; he would have made some type of joke, acting like it was no big deal, or he would have headed to the bar and tried to drink his problems away. We’ve only ever seen Nick be that open and honest with Jess, and while he’s not technically with her yet, it’s clear that his heart is pulling him in that direction. Nick feels Jess’s influence even when she isn’t around, and that’s why the first thing he does when he finds out about Reagan’s promotion isn’t try to talk with his actual girlfriend about it. No, instead, Nick calls Jess, not just because she “likes talking about problems” but because he knows, on some level, that she helps make him the best version of himself that he can be.

But while Nick and Reagan have some serious relationship issues they need to work on in this week’s episode of New Girl, Winston and Aly have a much more comedic problem to solve when his mom comes to visit and meet Aly for the first time. Aly already admits that she’s nervous, due to the fact that she doesn’t think she’s good at befriending women or friends’ family members, but Winston throws an even bigger wrench into the situation when he tells her that his mom doesn’t know he’s a cop. Because of his mom’s overly protective nature, Winston has been elaborately lying to her for years, keeping up the facade of his sports radio career, even going as far as to record hilarious, over-the-top versions of the radio show that he works on. However, after Aly and Winston’s mom begin to bond over their love of discount shopping, it doesn’t take long for the truth about her and Winston’s jobs to come out.

Despite the fact that this relationship storyline is the more comedic of the two in “Misery,” it still packs an emotional punch, especially when Aly admits to Winston’s mom that she worries about him while he’s in the field, too, but that she always has his back. Plus, New Girl does a nice job of giving Winston some more depth when he tells his mom that being a police officer is the first time he ever truly felt like he had a calling (not to mention, it’s a funny shoutout to the various jobs Winston had throughout the show’s first two seasons. Remember when he was a nanny?), and the show also provides his mom with a more nuanced and complex reason for being worried about him when it reveals that his father was a cop who walked out on them. Winston hasn’t always had the most rich or compelling storylines throughout the years on New Girl; however, ever since the show paired him with Aly, Winston’s stories have gone from being simply entertaining to also very emotionally affecting, and Lamorne Morris has risen to the occasion, becoming New Girl‘s most underrated actor and the true MVP of the show’s later seasons.

It’s unclear what exactly the New Girl writers have planned for the show’s final two episode of Season 6, which could also be the final two episodes of the series ever. But as long as they have the ambition and quality of episodes like “Socalyalcon VI,” “Operation Bobcat,” or even “Misery,” there’s a very good chance that this season (and potentially the series) will end on a high note.

Nick comes to a realization about his and Reagan’s relationship, and Winston’s mom meets Aly in a stellar episode of New Girl.