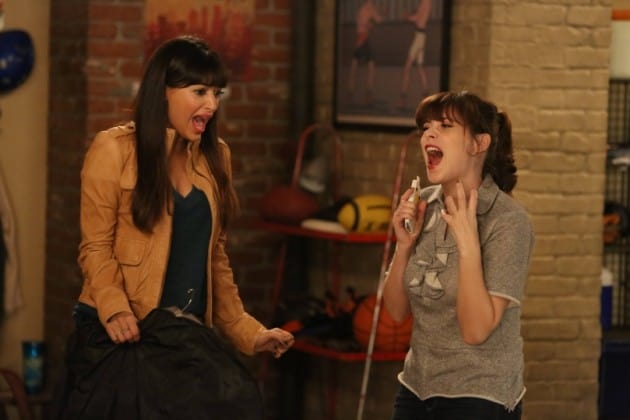 New Girl is always at its best when its characters are at their most emotionally vulnerable. Similar to last week’s fantastic Valentine’s Day installment, “The Crawl,” which saw Nick dealing with his heartbreak over his and Kai’s break-up, “Oregon” centers on Jess and her struggles to keep her long-distance relationship with Ryan alive.

While “Oregon” brings Jess and the rest of the group to her hometown of Portland for her dad’s wedding to Ashley, New Girl isn’t as interested in what’s actually going on in Portland as it is in the potential of what could have happened there. Jess has planned an entire itinerary for her and Ryan, so that they can explore her hometown, and she can show him all her favorite places, a way of bringing them closer together after so much physical and emotional distance. However, when Ryan ends up bailing on Jess, citing how flying back-and-forth like that wouldn’t make sense, Nick steps up and says that he and the rest of the gang would love to go on the tour that Jess had planned.

Much like the Season 2 episode “Chicago,” which showed us Nick’s home and introduced us to his family, “Oregon” sheds light on Jess’s childhood and frames her eventual break-up with Ryan through her crush on My So-Called Life‘s Jordan Catalano (which sounds more ridiculous than it actually is). Throughout New Girl, Jess has always been a big dreamer, someone who hoped and wished for the best possible version of her life. She wants Ryan and her to be soulmates, for it to be some epic love from a television show or movie, but as Nick tells her, somewhat harshly, “The only thing that matters is if a guy is there when you need him. Otherwise, you’re dating a wall.”

Jess doesn’t need a fantasy; she needs someone real, something she reaffirms near the episode’s end when talking with Nick. However, just because she can’t have her ideal relationship with Ryan doesn’t mean that she should lose her sense of optimism or hope, which is why it’s so important that she throws a rock into Crush Pond, along with the rest of her friends, expressing her excitement that she’ll meet the “right one” someday.

Jess’s problems in this episode of New Girl don’t stem from her view on life but instead from a lack of valuing herself. She has to realize that she doesn’t only deserve to fantasize about her perfect imagined relationship but also to enjoy the real life equivalent of it, and this finally clicks when she walks in and sees her dad and Ashley dancing together, so happy, so in love, and so together. Jess understands that while she may not be there yet, she will be someday, and until then, the love that she has for her friends, family, and, most importantly, herself is all the love she needs in life.

– Cece finally admits she has feelings for Schmidt in, after she gets the opportunity to go out with her old school crush, Jake Apex. It’s nice to see New Girl switching up the roles in the Schmidt/Cece dynamic, with him now dating someone else and her longing for him.

– Also, speaking of Cece, I’m so happy that the New Girl team is allowing Hannah Simone to be funny again. Cece’s initial attempts at talking to Jake were so hilariously awkward, and it was a lot of fun to watch.

– Whether you’re a Nick/Jess shipper or not, you have to appreciate how New Girl has always made Nick the guy that will go out of his way to try to help Jess, whether they’re dating or not. Whether he’s getting off a plane at Christmas or sitting in a bathroom giving her a pep talk at a wedding, Nick values his friendship with Jess more than anything and shows how much he cares about her almost every single episode.

– I tweeted this out last night, and I stand by it: Zooey Deschanel deserves an Emmy nomination for her work in “Oregon.” She was asked to do so many different things throughout the episode and nailed each one of them, whether it was comedy or drama. Also, her Cookie Monster version of “Ave Maria” was the best thing I saw on TV last night.

– It was nice to have both Rob Reiner and Jamie Lee Curtis back as Jess’s parents in this episode. They always bring the laughs, and Joan’s acid trip was particularly funny, especially as she and her friends welcomed Nick and Coach “into the womb.”

– Nick and Coach debating which firefighter was the cutest one was also hilarious.

– Just so you know, when it comes to sunshine and smiles, Winston always want to be sunshine.

– Something about that final scene at Crush Pond was just so great. It might have been my favorite scene of the episode.

– “I touched both your mother’s breasts in a communal womb today.”

– “I need a guy who shows up because anything else just isn’t real.”

– “This is hard to watch. It’s like when Bob Costas had that eye infection at the Olympics.”