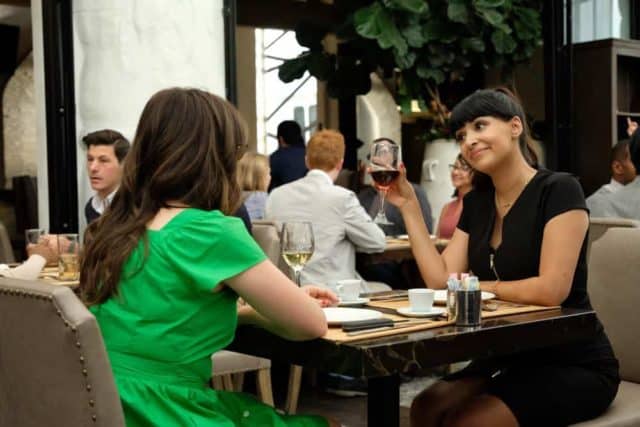 After taking time to establish its new, three-years-later status quo in last week’s Season 7 premiere, New Girl shifts back into its normal storytelling mode for “Tuesday Meeting.” Of course there’s some differences compared to earlier seasons, the main one being that Nick, Schmidt, and Winston’s storyline includes Ruth and her inability to sleep, but for the most part, this week’s New Girl functions like a tired and true model, centering on Jess and Nick’s career problems and their friends’ attempts to help them.

Jess and Nick’s issues in “Tuesday Meeting” are polar opposite. With her new position at Russell’s company, Jess feels undervalued and disrespected, saddled with busy work when she knows she’s capable of doing more, capable of making a major, positive change. She’s not satisfied with her new job and plans on quitting. Nick, on the other hand, lacks faith in his writing abilities when his newest Pepperwood installment is rejected by his editor. When Nick’s asked to bring in three new ideas the following day, he freaks out in typical Nick Miller fashion, believing that The Pepperwood Chronicles was his only worthwhile creation and that he has no other compelling stories to offer.

As I mentioned above, these stories don’t cover any new territory for New Girl, but that’s to be expected in a show’s seventh season. We’ve seen Jess struggle to be recognized for her talent before, and we’ve watched Nick second-guess himself on countless occasions; her determination and his neurotic nature are two of the many reasons why we love both characters. But even though these storylines feel familiar, there’s enough fresh bits of newness sprinkled throughout them that ensure they don’t become stale. This “newness” mostly springs from Schmidt and Cece, who are exhausted due to Ruth’s refusal to sleep and Cece’s busy work schedule. The two of them are no longer just a married couple: they’re parents, and this new lifestyle that they’ve had for the past three years informs both their friendships with the show’s other characters and the comedic relief they provide.

Most of the humor that Cece supplies throughout “Tuesday Meeting” is a result of her mixing her wine with coffee, something she would have never done before she became a mother and ran her own business; her drunken behavior is the source of many laughs throughout the hour, particularly her awkward crawl out of Russell’s office once she and Jess learn that the Tuesday meeting they’ve burst into is actually a Divorced Fathers support group. Meanwhile, Schmidt’s duties as a father complicate his friendship with Nick throughout this week’s New Girl, as he struggles to balance taking care of his actual child and his man-child of a best friend. There’s a couple different funny moments throughout “Tuesday Meeting” where both Schmidt and Nick acknowledge the fact that Schmidt took care of him over the years like a father watches over his son, and it also serves as a surprisingly emotional acknowledgement of the almost two-decade long bond shared between the two friends and Nick’s evolution as a person over that time. Nick no longer needs Schmidt’s coddling like he did during New Girl‘s early seasons; however, he still needs to be able to lean on his best friend and look to him for encouragement when he’s stressed and worried, which he is for so much of this week’s episode.

What “Tuesday Meeting” functions mostly as, though, is a reminder that both Jess and Nick possess the capability to fix their own problems, but they still always need a little push from their best friends to remember their own strength and power. Jess needs Cece to rile her up enough so that she charges up to Russell and confronts him over her position, which leads to him admitting that he gave Jess all that busy work because of the trust issues he has from his ex-wives. Nick needs Schmidt and Winston to point out the good story ideas he comes up with because his own self-doubt won’t let him recognize their potential. This week’s New Girl reminds us that the loft gang is always stronger as a unit; even though they’re not all living together, they’re still a family that brings out the best in each other through whatever means necessary. And when it comes to Nick, Schmidt, and Winston, those means are almost always wonderfully insane and absolutely hilarious.

Cece encourages Jess to confront Russell about her job, and Winston and Schmidt help Nick find new writing inspiration in a solid episode of New Girl.