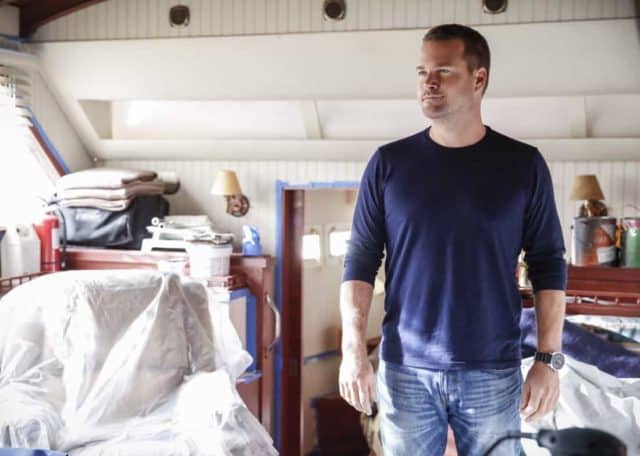 NCIS: Los Angeles is willing to do just about anything in the interest of national security, but there’s a level of discomfort that is only so tolerable. Callen’s ex-girlfriend Joelle was the one person the team would happily have never seen again. Don’t you just hate it when your traitorous ex-girlfriend bursts into your house covered in blood asking for help? Yes, it’s that kind of week. Joelle comes to NCIS begging for help, supposedly from her own team. However, this is Joelle. Nothing she says is ever the full story.

After escaping captivity, Joelle goes to the one person she thinks can help her. He just also happens to be the one person who despises her enough to not believe her story. She claims the rogue CIA sect she was apart of kidnapped her to bring her back in, even though she left the CIA. Predictably, after everything Joelle put NCIS through, Callen doesn’t believe a word of what she says. Why would he? If Joelle had gotten her way, NCIS would have been even more compromised and Densi wouldn’t be alive to argue over wedding plans. For that last one alone, we hate her. However, as it begins to look more and more like Joelle is telling the truth, NCIS has no choice to look into her claims. They have an obligation to look into anything that compromises national security, even if it means dealing with Joelle.

Deeks isn’t that far off in his description of Joelle as a black widow, and we learn just how compromising she is through her husband. He actually knows a lot more, and a lot less, than anyone realized. He knows all about Joelle’s work without any of the details, he knows all about the affairs she’s had without knowing one of her marks was Callen, and he trusts her to keep their family safe. Unfortunately, he can no longer trust in her love for them.

There’s not much about Joelle that anyone can trust. She’s been a ghost for 20 years. Never the same name, never the same story, always a different motive. The one thing she is consistent about is keeping her husband and child safe. Even that motivation starts to wear a little thin for NCIS. Callen and Sam show remarkable restraint. It’s actually a remarkable contrast to the tension and doubt Hidoko and Director Mosley show, considering they weren’t around for Joelle’s betrayal. Hidoko has more than her fair share of doubt, especially when she and Sam almost die because of Jo’s lies. Joelle conveniently forgetting to tell NCIS that she is still technically in the CIA qualifies. Mosley pretty much sums up what everyone else is thinking: “She is their [CIA’s] problem, and never should have been ours.”

With just a little more time and patience, NCIS finds that Joelle was actually the pawn. The rogue sect of the CIA she joined was actually a shadow group called the Syndicate who look for deep undercover agents to get them a financial foothold in the CIA. Joelle kills the man who kidnapped her, but takes a bullet herself in the process. That is the end of Joelle Taylor, or should I say Jane. Except that it isn’t. Better everyone think that Joelle is dead. Her family will be safe, and the CIA won’t be able to stop Joelle from going after the Syndicate. At least she’ll be out of Callen’s orbit once and for all.

Is this really the last we’ve seen of Joelle?

NCIS: Los Angeles must protect Callen’s traitorous ex in the interest of national security, if they can tell when she is and isn’t lying.