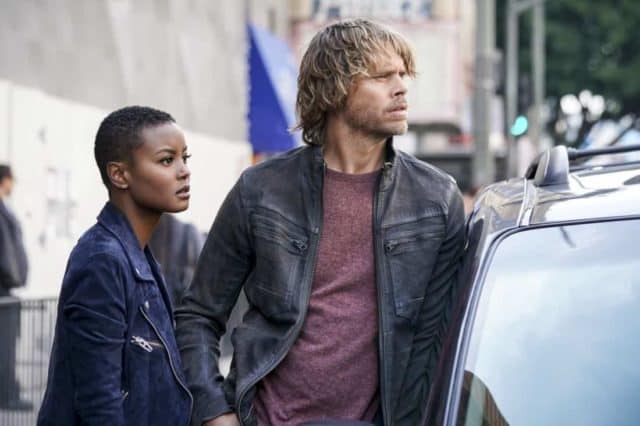 NCIS: Los Angeles has chased a lot of killers, but serial killers are new territory for them. By serial killers, I do not mean the usual contract killers or terrorist NCIS: LA is used to dealing with. In the middle of the OSP team’s most disturbing case, they are split up and switched around. But a different partner can shift your perspective, especially for the least trusted member of the team.

Is there room for two mother hens in the hen house? Given that the peace in the house just cracked between Mosley and Hetty, I’d give that question a big negative. Mosley decides to switch up the partnerships, while taking Callen as her own partner on a personal case. While Kensi is partnered with Sam, and Deeks is partnered with Hidoko, and Callen follows Mosley in her pursuit of Spencer Williams, an international arms dealer.

Under Hetty’s command, the rest of the team focuses on the disappearance of Timothy Weir, a Navy Lieutenant Commander with the DOD. The only clue they have as to his activities is that he has been having a forbidden relationship with a Chinese attachÃ©. At least that’s what she claims, until she finds Weir’s body, dismembered and pieced together with other people’s body parts. She was only able to track her boyfriend’s body because they both secretly worked for the NSA, and put trackers in each other just in case things went sideways. The FBI informs them that Weir was just in the wrong place at the wrong time, like many others in a similar investigation the FBI has been working on. Because it’s not a matter of national security, NCIS can let the FBI take over. At least they are happy to, until they realize the witnesses they were dealing with were in fact the killers. This story isn’t over by a long shot.

Callen and Mosely team up with ATF to catch Spencer Williams and recover $45 million in weapons. Callen quickly surmises that Mosley doesn’t just want the weapons, she wants the man himself. Her ire is definitely stoked when ATF’s undercover agent is killed in the middle of the bust. Callen realizes that one of his CI’s can get him to take the dead agent’s place. But if he’s going to risk his life, he needs full disclosure from Mosley. Sure enough, the case is very personal to her, as she had a relationship with Williams before she knew who he really was. Callen can definitely sympathize there. He succeeds in getting the weapons back, but cannot stop Williams from escaping.

The partnership switch-up reveals a lot of interesting things about the new group dynamic, especially for Hidoko. As a former outsider, Deeks knows what it is like to work his way into the position of family member on this team. He is proof that you have to trust the family to be apart of the family. Everyone likes Hidoko, and would be happy to welcome her as family, but she is loyal to Mosley. She credits Mosley with getting her through a lot, much in the same way Hetty did for each member under her wing. Hetty pushes Mosley to be honest with her team. It’s the only way that things are going to get better. We knew Mosley had a child, we just didn’t know under what circumstances. She didn’t realize Spencer Williams was a monster until she already had a child with him, a child she hasn’t seen in five years. Callen is 100% behind her once he knows the truth.

Can Mosley truly be apart of the team now that she has opened up to Callen?

Mosley finally opens up about her past in order to have true allies within NCIS: Los Angeles.