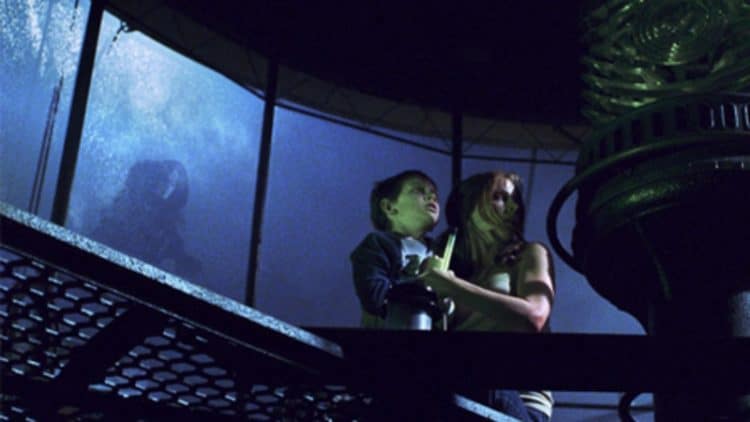 People are afraid of the dark even if they don’t want to admit as much. The reason why is pretty simple, there’s no advantage for people in the dark, which means that there’s no way to see what might be coming at them, or what might be hiding in the dark. Without some other means of light or illumination or anything that might help out, human beings are woefully unprepared for the darkness since we haven’t adapted over the years to low-light situations. But in the movies, the darkness is used in such a way that one can’t help but be impressed as some movies make such great use of the shadows and the deeper darkness that it becomes insanely terrifying or a masterful use of the dark as a plot device. Some movies are able to use the dark more effectively than others, but the overall effect is that humans aren’t as adapted for the darkness and it’s a tool that can be used to show that evolution didn’t prepare us for everything.

Here are some of the best uses of darkness in the movies.

The best part about the use of the darkness in this movie is that it was essentially a part of Alessa as she’d taken over the town in order to enact her revenge on the people that sacrificed her innocence. The fact that the people ran from the darkness because it harbored things that would kill them is even better since it does present a very cloying and active presence.

People either liked the Paranormal Activity movies or they didn’t, there’s not a lot of middle ground since some people tend to think that it looked poorly on witches and covens while others think that it was a clever and terrifying ghost story that had deeper ties to other supernatural aspects. The darkness in these movies is more of a concealer than an active presence, but it works.

Every shadow in this movie appears to hold some type of menace that is poised to be absolutely malevolent and is set in ‘attack’ mode since the Tooth Fairy in this particular story is the spirit of a vengeful old woman who was falsely accused and executed for a crime she didn’t commit. There’s no mistaking the threat within the dark in this movie.

Despite being very campy, this story wasn’t as bad as it might appear to be since it did make good use of the elements around it. If not for the physical representations of the tongues that were used to give the antagonist her ability to mimic others it was actually kind of scary. But the use of the shadows was a pure menace, without any hint of refuge.

The line that Dr. Weir uses, “I am home.”, when Captain Miller makes his intentions known is utterly creepy since he disappears into the shadows only a second after. The darkness is kind of a physical presence in this movie but it’s also vague as well since it’s all over the place, becoming amorphous in a way that is hard to pinpoint. And to be fair, that’s awesome.

The dark is the catalyst for this movie since the bioraptors that come spilling forth into the world are creatures of the dark but aren’t exactly the antagonists because they’re predatory in nature. They do come off as the antagonists when they’re going after the survivors of the crash that occurs in the first part of the movie, but since they’re following their natural instinct it’s harder to call them evil. Johns on the other hand is a lot easier to call an antagonist since he makes it clear that he would dump everyone just to survive.

The darkness in this movie almost qualifies as another realm unto itself since the moment the women find themselves lost in a cavern system that isn’t mapped, they might as well be in another world where monsters dwell. It’s a little melodramatic to be certain, but it’s also quite true since without knowing where you are there’s no point of reference to draw from.

The xenomorphs just tend to blend in wherever they go since they’re such highly adaptable creatures. But this is truly nightmare fuel in this movie since they blend into the darkened structures they’ve created. Not only that, but while they show up on motion sensors they can fool the naked eye quite easily, especially in the dark.

I’ve used the term ‘cloying’ already, but this goes well beyond that since the house in this movie is oppressive in a way that suggests that someone is looming over you at every possible second. The movie does move kind of slow, but it also comes to a shocking end that’s kind of worth it.

Sinister would be the way to describe how the shadows are used in this movie since the darkness is kind of like a living thing that attaches to each person and guides them along the currents of Whitechapel in ways that are desired and in ways that feel as though they’re pre-destined no matter how badly they turn out.

How the darkness is used in movies does make a big difference.