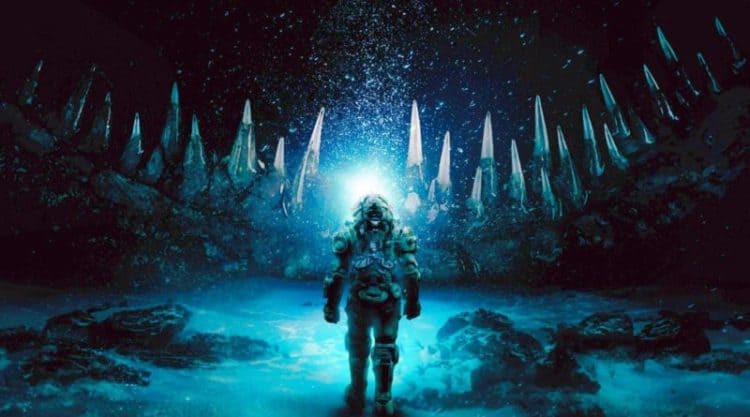 Plenty of movies end up showing a great deal of their content in the trailers but end up having not enough material to make the audience care about anything else. The fact that this is a commonality among many movies is kind of saddening, but with Underwater, it feels as though not enough was given, and still, not enough was revealed until near the very end. In the spirit of being fair, there was enough content to keep things fairly interesting, but the opening narrative and the pace did a lot to slow things down throughout the movie. Somehow, listening to Kristen Stewart’s voice is soothing to some people and simply irritating to others. The idea of being miles below the surface in the contained space of a research station is terrifying enough for a lot of people, but the sudden and unexpected collapse of that contained space would be the type of nightmare that a lot of people couldn’t picture putting themselves into, even for the purpose of entertainment. But this thrilling run through a collapsing station feels somehow disjointed, as though the movie started halfway through and lost a great deal of exposition.

Running through the station in an attempt to find working escape pods the survivors encounter strange, aquatic creatures that prove to be less than friendly as they seek to kill off each one of the survivors before they can reach any semblance of safety. Watching this movie can easily fill a person with anxiety, but it comes from waiting for something worthwhile to happen between action scenes. Yes, the action in this movie is actually kind of hard to watch, but it’s a matter of opinion since some folks might like this movie and others might be of the mind that it didn’t give enough of a payoff at the end, even though the image of Cthulhu is kind of impressive. The way it was presented is even kind of cool, but the timing felt way off.

To be realistic, timing is difficult when it comes to revealing anything in a horror movie, and a quick reveal can ruin things just as much as a late reveal can. Cthulhu is a great monster since the audience doesn’t even get to see the titan until the movie is almost over. It feels fair to think that the CGI needed for this creature is great enough that keeping it hidden until then is a good idea. But it was still the kind of buildup that didn’t feel like it was worth the payoff, since the little bit that Cthulhu did show up for was meaningful as a big reveal, but it didn’t create a lot of need for the audience to invest in the titan since the creatures that lived upon its body were a lot more interesting at that point. There was a bit of flash in this movie and too much rambling substance that didn’t help it that much. Some folks might want to argue by saying that Underwater was an entertaining and a little deeper, no pun intended, movie than many might understood it to be, but the truth is that this movie didn’t find sure footing until nearly the end.

Strangely enough, the ending of this movie could have easily been the beginning of the first or second act climax since it’s easy to think of many ways that this feature could have continued from the first sighting of Cthulhu, and thereby saved a lot of empty screen time that focused on the survivors and the smaller details it took to winnow their numbers down until there were only three left. There’s no doubt that some would argue that featuring the titan too soon into the movie would have been a mistake, but it might have been a little more successful simply because it might have very easily solved the question of why watching the bulk of this movie was necessary when the beginning and end could have started the movie and then raised the stakes as the survivors found a way to outfox the titan somehow. By the end, it’s too easy to see how a serious lack of information led to the eventual feeling that this movie was a lot of fluff and not enough hard-hitting substance.

The acting is an element that wasn’t that big of a deal since the actors managed to portray their characters in a way that made sense but didn’t go too far out of bounds and therefore kept things moving in a way that was easy to appreciate. If there was any real issue with this movie it was the fact that it presented itself as a seriously terrifying movie that didn’t offer a satisfying payoff in the end. While the reveal was interesting, it felt as though it had been thrown in at the last second.