Home
Movies
Movies That Need a Reboot: Falling Down 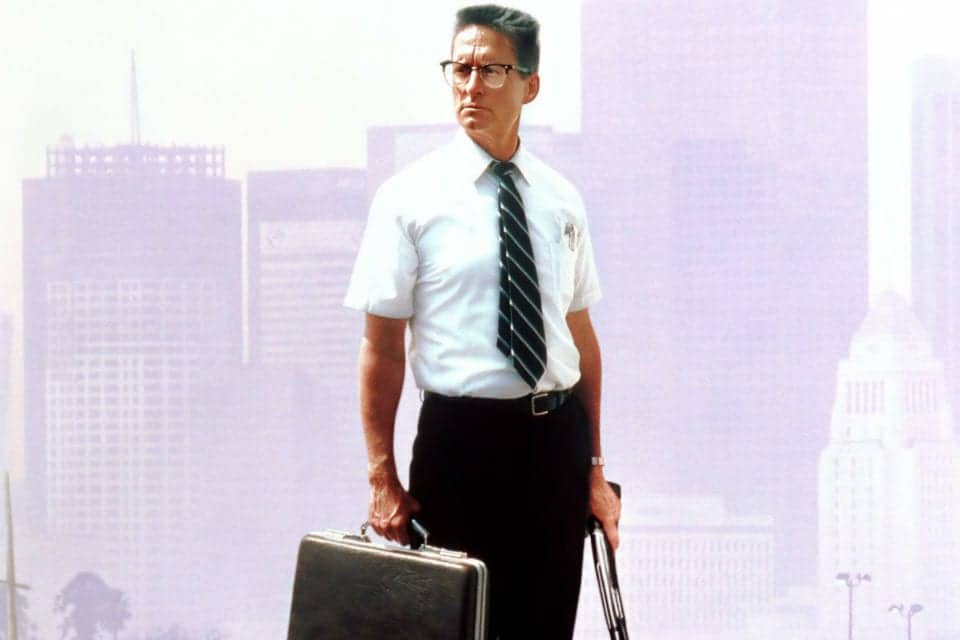 Some might want to know how this movie could be rebooted or even remade, but the truth is that we live in a slightly different world than the one that Michael Douglas found himself walking through back in 1993. Almost three decades later things have become even crazier if that’s believable, and people like William Foster, Douglas’ character, are a little more plentiful and have learned how to be smart when having their breakdowns, as a lot of them have been able to air their grievances in ways that have started a movement or learned how to disrupt many lives all at once, not just a few at a time. One thing that should be remembered when thinking about this character however is that while he did make a lot of the wrong choices, he started out with a fairly noble goal of simply going home, and then finding a present for his daughter, who he wasn’t allowed to see since his ex-wife had a restraining order against him. Foster, who had been living with his mother up to that point, was not a stable individual, as was proven during his long walk through the city.

From fighting with a Korean store owner over the prices of his goods to getting into a scrap with two members of a street gang, William becomes a true terror as he tries his best to make his way home. It’s tough to hate this guy entirely though since it’s easier to think that he’s one of the many downtrodden individuals that’s been trying and trying but hasn’t been able to attain the life he wants. On the other end of things though, William does have a few screws loose, and this is made more than apparent when he’s dealing with people, since in a calm and controlled type of way he threatens several individuals while going over what he remembers of America, how much things cost, the customer is always right, and of course, that Americans don’t look at relics of war as popular items to have on stock in a surplus store.

The scene in which confronts a racist and homophobic individual in a surplus shop is one of the most telling when it comes to the reason why it’s so easy to be confused with this guy. The fact is that he is a bit nuts, but at the same time, he’s a guy that feels as though he no longer recognizes the place he calls home. Some folks might throw in a comment about ‘oh the poor white man, what a tragedy’ with a healthy dose of sarcasm that would make it clear what some folks think of this idea. But William’s story is one that can be used with just about anyone since it’s not about race and it’s not about the idea of who he thinks belongs in the USA or not, it’s about a guy that feels lost in society, and is trying to reach the one thing in his life that was good at one time, even if he’s being told that he doesn’t belong there any longer.

If this movie ever did get the reboot treatment it’s a big hope that race wouldn’t be a big issue that a director would lean into, since whether one wants to think that it’s a big issue or not, the fact is that the only evidence of any such thing doesn’t come from William, no matter how someone might want to twist things to fit their narrative. The story is one that is kind of interesting since it shows two men, William and the detective that’s on his trail, Sgt. Martin Prendergast played Robert Duvall, that are at the end of their prospective trails, with William seeking to find the last bit of goodness in his life, and Martin attempting to deal with the fact that he’s nearly retired. Both men come to find that what they were looking for wasn’t quite what they thought it would be, and in the end, William was the one that had to be in the wrong. Remaking this movie would be a lot different no doubt since the technology has improved over the years, the methods used by the police have changed, and it’s fair to say that this movie would be intriguing to watch if it were to be pushed to the audience once again.

As I mentioned, race isn’t an issue with this story, which means that the main characters could be race swapped and still tell the same story with notable differences but the same main idea. It would be the kind of story one could possibly see an aging actor taking on in the role of Martin, while William could be played by a middle-aged individual that’s at the end of their rope. Honestly, it might work.