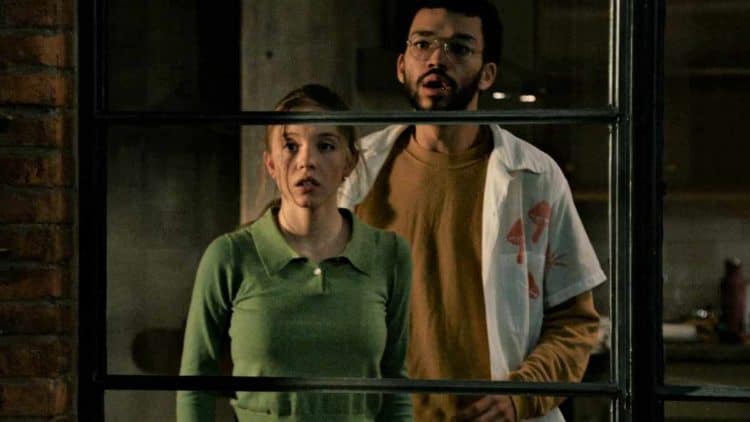 Have you ever looked out your window and noticed your neighbors doing something interesting? Some might say this movie is Hitchcockian in its complexity and storytelling, but The Voyeurs is actually a few shades away from Hitchcock and has a much more pronounced feel that can only be produced by modern times when one accounts for the twist near the end. When Thomas and Pippa move into a swanky upscale apartment they think it’s the best thing that’s ever happened to them. That’s right up until they look across the way and take note of their neighbors, Sebastian and Julia, who are utter strangers throughout the movie until things really start to happen. Most people know what a voyeur is, but for those that don’t, it’s an individual that spies on others without their knowledge or consent. In the modern era, this is far too easy for many people to do since thanks to technology and the ability to stay as far apart from one another as possible, people can watch from afar as much as they’d like and not suffer the consequences unless someone is willing to rat them out.

Ironically, this is what happens in the movie since the moment that Pippa and Thomas take note of the couple across the way they begin to notice more and more about the couple, such as the fact that when Julia is away, Sebastian tends to have female models over to the apartment and ends up having sex with them, which is something that bothers Pippa profoundly. Eventually, Thomas and Pippa, wanting more than just a view, crash a party their neighbors are having and manage to plant a device that will allow them to listen in on their conversations as well. As if things couldn’t get dodgier, right?

At some point, Thomas begins to tire of spying on the neighbors and implores Pippa to stop as well. Despite saying she will, however, Pippa finds that she can’t stop. After Julia visits Pippa’s job as a client, Pippa decides to hang out with Julia for a bit, and in essence, gets to know her. What she doesn’t tell Julia is that she knows that her husband is cheating on her. Instead, Pippa finds another way to send the message after watching Sebastian bed another two women. Using a wireless connection between her husband’s computer and the neighbor’s printer, she sends a message to Julia that her husband is cheating on her, and that there’s evidence of it in the wastebasket. The events that happen after this go from worse to worse as Julia not only takes her own life, but Thomas walks out on Pippa because of their involvement. Unable to keep from peeping, Pippa soon follows Sebastian to a nearby bar, she eventually finds herself in front of his camera, then in his bed. Upon coming home, most likely to apologize or at least reconcile with Pippa, Thomas notices Pippa and Sebastian having sex, and as can be expected, he didn’t take it well. But when Pippa returns to the apartment to find that Thomas has hanged himself, the bottom appears to have dropped out.

At least, that’s what it looks like. Upon attending Sebastian’s next gallery event, Pippa finds out that not only is Julia alive, but that she and Thomas had been watched from the moment they moved in. Not only had their apartment been leased, but they’d signed the lease without noticing a clause that Julia and Sebastian had added, one that stipulated that the tenants would be under constant observation from a loft space above Julia and Sebastian’s apartment. Upon learning this revelation, Pippa tries to destroy the couple’s loft, but eventually moves out of her apartment, but not without noticing something odd. Upon returning to the apartment, Thomas attempted to drink one of Pippa’s beverages but then poured it into the bird feeder outside of their window. When Pippa notes several dead birds beneath the feeder, she gets an idea that doesn’t come to fruition until later. Sebastian and Julia manage to achieve great fame for the exposing of their tenants, though it would appear that they’ve also received criticism for this as well. But upon returning home they find a congratulatory bottle of wine waiting on their doorstep.

Following a toast and a drink, the two note that their printer is working once again, as it begins printing messages that they quickly deduce are coming from Pippa.  After chasing her from the rooftop to her workplace, Sebastian and Julia confront Pippa, only to faint suddenly, as Pippa admits it was the wine. The audience might think that she’s about to kill them both, but instead, a strange but fitting twist comes when she uses one of the machines at her job to burn their retinas completely, leaving them blind and nearly helpless as a new couple is seen to move into Pippa’s apartment. As the couple takes note of Sebastian and Julia, one of them says that the two are none of their business. Irony is definitely the name of the game in this movie, as the ending is perhaps one of the most satisfying that’s been seen in a while.