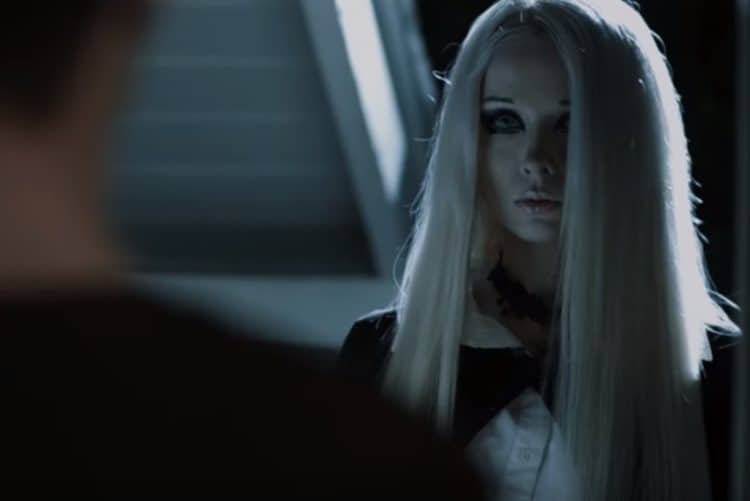 If this movie serves any purpose it should be to warn guys that are pining for their fed-up girlfriends that mail-order brides aren’t the answer. Or maybe there’s another point to this movie if there’s a point at all. It’s enough to say that there is a good story here, but that’s kind of where the ‘good’ portion ends since after that it becomes more of an exercise in what a beginning film student might churn out if given the chance. When Andy’s girlfriend Shannon leaves him due to various reasons, most of which appear to be Andy’s friend, Chris, the two friends decide to send away for a Russian mail-order bride, finding one that Chris has been looking at for a while. Outwardly, the woman that they order away for looks gorgeous, in fact, she does look like a doll, as the title says. But there is something wrong with her due to her vacant stare and stiff movements. Plus, she doesn’t talk, which leaves Andy and Chris wondering what might be wrong with her. The two end up placing her in the attic, as they’re uncertain of what to do with her.

The story becomes even more complicated when Shannon decides to take Andy back under the pretense of not wanting to stay at her mother’s home since her mom’s boyfriend is creepy and makes passes at her. Up to this point, not a lot is known about Natasha, the mail-order bride, but she’s definitely strange. What starts to make her stranger is the fact that she has stitches up her back and front, indicating that she was pieced together, as was mentioned briefly by a voice off-screen at the beginning of the movie. But when she enters the room when Shannon and Andy are getting intimate, Shannon notices her and gets freaked out. Up to this point, Natasha has been weird, but at this point, she’s getting downright creepy as she’s walking about on her own and appears to be checking out her surroundings.

As the movie goes on it becomes clear that Natasha is a tool of sorts that is meant to do something that’s undoubtedly diabolical as she starts by killing two of the women that Chris invites over to the house when the ladies decide to start making out in the garage. From there, things only get stranger as Natasha spends a lot of time skulking around the house and piercing a mark on her left palm. The killings continue as she kills a woman named Mindy that Chris calls over when Mindy examines the attic. At that point, Shannon has already examined the basement and found a set of papers that unnerve her as they have her, Andy, and Chris’s names on them. One can imagine that this would freak anyone out enough to send them running, but when she hears a sound, Shannon hides beneath the bed and risks discovery by Natasha when she sits in her chair to rock back and forth. Sitting through this movie is a serious endurance trial since while the titular character is good looking and does offer up a definite scare factor, the overall acting in this movie is, well, it’s something that leaves a lot to be desired since it’s happened in many upon many movies one can’t help but think that the actors in this movie were doing their best to remember their lines while in the middle of filming.

The ending is a bit surprising, but it’s probably one of the best parts of the movie since it shows that the bad guy does get to win from time to time, and the fact that Natasha’s status as a tool is reaffirmed is kind of cool since it becomes easy to see that she’s a living automaton that is used for snaring new victims for her maker. It’s a corny, cheesy movie that has horrible acting and a decent premise, but getting through it leaves one feeling thankful that it does have an ending that isn’t all about the good guys getting their way in the end since the idea that the villain can win is a bit exciting and sometimes a little more realistic.

Apart from that, The Doll is the kind of horror movie that one might watch when they’re a hormonal teenager that wants the chance to see a bit of skin and doesn’t have to worry about an overly-complicated plot. Otherwise, it’s the type of movie that an adult can watch while getting drunk to laugh a little harder at some of the more ridiculous parts. What’s really funny is that the situation between Andy, Chris, and Shannon is something that quite a few people have been through in their lives. All in all, though, the movie is absolutely ridiculous and is something that a person might watch out of morbid interest.