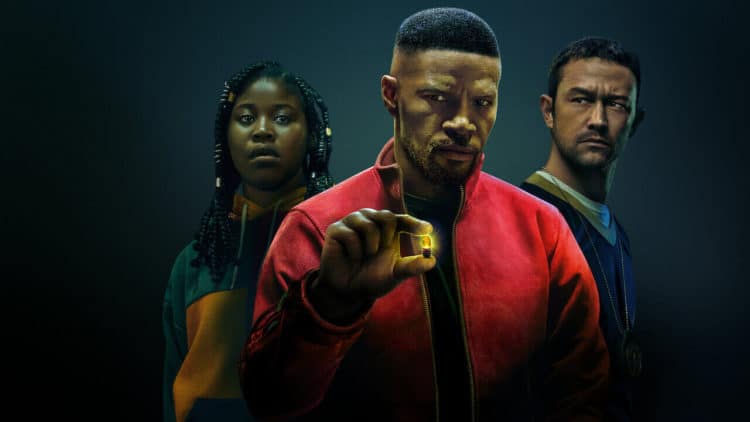 As a movie that’s supposed to display those with superpowers that are granted by a pill, Project Power is, well, still kind of goofy, but in a decent way. The introduction of the drug gives the movie the feel of a 90s action movie, but the technology and the acting are all modern-day and enjoyable enough that the movie isn’t too hard to watch. Netflix has been doing a decent job of rolling out one movie and show after another, and yet there are plenty of movies like this one that leaves some people loving it and others feeling that they’ve watched a knockoff of a DC or Marvel movie. That’s kind of funny since both of the main stars have been in a DC or Marvel movie. But this particular movie fosters heroes and villains differently as the pill known as Power is something that was created to give people different but wondrous abilities for five minutes at a time. The only problem is that there’s no telling what kind of power they’re going to receive when taking the pill. Plus, the effects don’t work the same on everyone since it could be beneficial or it could be deadly.

When Frank, a New Orleans detective, seeks to get Power off the street and employs Robin, a young girl that is seeking to make money to help with her mother and her own life, it becomes evident that Frank is using Power as well to even things out between the cops and the criminals. The distribution of Power among the drug dealers in the city, and thus among the citizens, has become a problem, as is revealed when Frank uses Power to chase after a chameleon-like bank robber that took the drug to make his getaway. After being suspended for using the drug, Frank eventually runs into Art, and with Robin coming along with them, the three end up infiltrating a location where Power is being bid on by several different buyers that are looking to continue the spread.

When Art is exposed, Frank charges in to help while Robin stays topside. After killing several of the individuals in the auction, the two men have to face the auctioneer, who takes a pill and becomes a raging behemoth that overpowers both of them and forces the two men to run. Despite arresting Art, Frank is convinced by Art that his captain is in on the scheme and that neither one of them are safe. Art’s daughter, Tracy, is revealed to be the source of the drug since after being used as a guinea pig after his time in the military, Tracy developed her own power as a result of her birth. Unfortunately, the company that used Art captures Tracy, which forces Art to enlist Frank’s help once again as they seek Tracy out. To free her, Art has to pop a pill, something he didn’t want to do ever again as the first time he was tested on almost killed him. Frank and Robin have to take cover as Art’s power is an imitation of a certain shrimp that he uses as the emphasis of the power that he’s exhibited in the past.

The result from taking the pill is insane as the surrounding atmosphere is used as a weapon against their enemies, allowing Art, Robin, Frank, and Tracy to escape. As one can imagine they have their own version of a happy ending, and the story ends in a manner that people might have expected. When all is said and done, this movie is one of those that managed to raise expectations in a big way, but the downside is that those expectations weren’t exactly missed, but they weren’t really met either. Instead, the expectations were kind of tossed out to simply let the movie happen and become what it was meant to be. That thought is kind of saddening since it means that the movie wasn’t meant to be anything great, but just another action-packed feature that wasn’t horrible but wasn’t a massive hit either. To be fair, the action is what kept this movie moving forward, and the dialogue wasn’t that bad either. But somehow, the movie just didn’t hit the same level as other movies that both men have starred in before.

Jamie Foxx and Joseph Gordon-Levitt are two great stars that have done amazing things in the history of cinema, and it’s easy to think that this movie was bound to be something special if it had followed a slightly less goofy premise. If Power had been something that was introduced in a slightly different manner it could have worked on an entirely different level. But somehow, the way it is just didn’t fire on all cylinders for a lot of people, even if it wasn’t that bad.