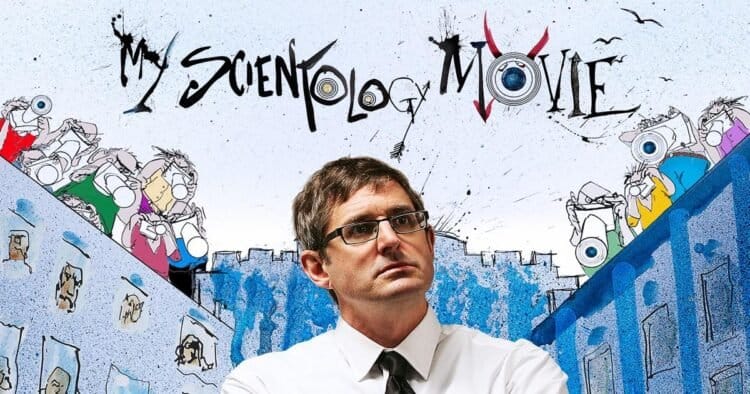 It’s very easy to mock and ridicule a religion since many won’t fight back unless they’re provoked in a manner that demands a response. As shown in one documentary or another, Scientology has been ‘attacked’ by those who have either ‘escaped’ the church or been let go, as the church would have people believe. The religion has been adamant that nothing stated in one documentary or another is false and those that have left the church are simply bitter individuals who were kicked out, but they’ve taken measures to discredit anyone and everyone who has a view that is contrary to their own. Louis Theroux went on to create a movie detailing what Scientology is about, and in the process, he had to endure a great number of hurdles that many people had told him to expect, and that he knew were going to be coming. And yet, he kept going. Many people that have come up against the church of Scientology have found that they’re not afraid of hitting back when they feel the need, and while their stance is that they’re simply trying to defend themselves, their reaction tends to be a little, well, over the top.

The documentary can be accused in some ways of trying to ascertain whether or not the church is filled with a bunch of kooks, and even with celebrities such as John Travolta and Tom  Cruise being counted among the ranks, it’s not enough to state that it’s completely legit. Even stating that L. Ron Hubbard, who was a science fiction novelist that had many different off-kilter ideas isn’t quite enough to condemn the church entirely. But where things start to get a little hairy is when a person starts to hear how many people were ‘released’ from the church and the conditions of their departure. Then, the idea of ‘disconnecting’, having to essentially snitch on one’s fellow church members, and living a life that feels absolutely paranoid makes a lot of people wonder just how great this church is.

Still, breaking them down and stating that the church of Scientology is a cult that needs to be eradicated still isn’t the best idea for a couple of reasons. For one thing, it’s negating the fact that anyone who decides they want to join the church is an intelligent, free-thinking individual. Be it a cult or a church, the fact is that an organization like this doesn’t take the dimmest bulbs in the bunch, as such folks don’t serve a purpose other than to be mindless thugs. Scientology has some of the best and brightest individuals among its ranks, and they don’t mind using that to the best of their ability, no matter what it might be for. The fact that Tom Cruise is their poster boy and has been for a while is part of the reason why Scientology has been on the rise for a while. But how people continue to think that it’s one hundred percent positive and preaches a level of caring that many other religions do is confusing since learning just a little about the religion is enough to make a lot of people wonder how this could possibly be.

Louis makes it through the creation of this movie by showcasing what the church does to those that poke the bear, so to speak, and enlists the help of a few individuals the were once a part of the church and were disavowed at some point since they decided to walk away and share church secrets that were then denied just as quickly. In other words, the church’s constant denials of what goes on behind their doors, and their less than savory tactics of trying to gaslight and accuse others make it tough to think that they’re anything other than a cult. But the belief of those that cling to the church is hard to completely deny or affirm since there are simply too many factors to consider. Unfortunately, the fact is that somehow, in some way, the church has managed to keep people in place in one way or another, and while those that left say one thing, the church continues to say the same thing, that it’s all lies.

Documentaries such as this make it easy for a lot of people to feel one way or the other. People get angry at religions that have various restrictions and don’t compromise, and yet many people seek to join these religions all the same. Scientology is one of the many religions that has been maligned over the years, but at the same time, the tenets that help it to exist are rather strict, and in some ways, the teachings of L. Ron Hubbard feel as though they were the product of a paranoid mind that was ready to go on the attack, rather than accept that the world around them was going to be critical at times.