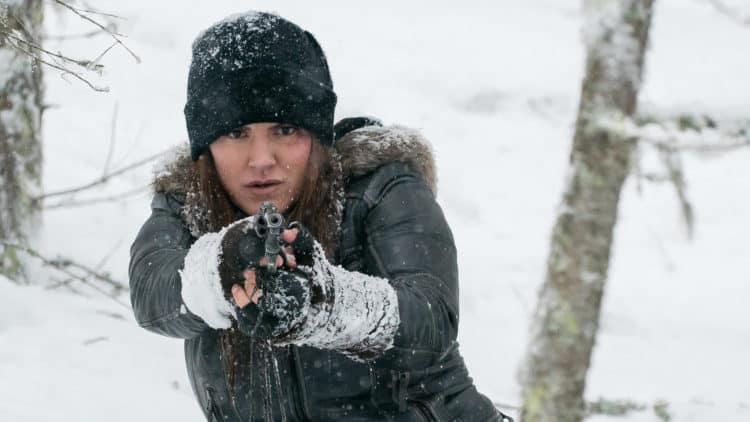 Action movies don’t always need to be entirely realistic to be entertaining, but Daughter of the Wolf tends to push things a little further than they need to go, especially since Clair, played by Gina Carano, manages to survive the types of trauma that would likely kill just about anyone. A plunge into an icy lake, a fall over a waterfall, those are deadly circumstances that would kill a lot of people in short order, but the fact is that Clair proves to be more than a little resilient in this movie and as a result, she ends up doing what she sets out to do in this simple but fairly entertaining action tale about a kidnapping and a double-cross that ends up going very, very wrong. As far as action movies go this particular tale has a decent story that it follows as one can see how a person would feel determined, angry, and definitely vengeful if their kid was taken by someone that had a serious ax to grind against a deceased member of their family. While the grudge isn’t exactly as clear cut as it might appear, it is apparently enough to drive the story since Father, played by Richard Dreyfuss, makes it quite clear at one point what his motivation is.

There’s a strong desire to believe in Gina as an action hero and to think that she can make it pretty much anywhere, but like a lot of athletes that have made their way into the film industry, it’s safe to state that she might have a little way to go right now. Her best opportunity for being an action star was The Mandalorian, but since that was taken from her, no it was not a justified firing no matter the opinions that say it was, but she’s been working on building on her reputation over the years. This type of movie feels like a rite of passage or, if someone is unlucky enough, a typecast role that might continue to be all that Gina might be able to do moving forward.

The hope of course is that much like other athletes that have found their way into acting, Gina will find a role that will help to define her career and escalate things to a level that will help others to notice how great she can do. Cara Dune from The Mandalorian was a fun role to watch her in, and given that Daughter of the Wolf came out in 2019, and Gina’s movie career started in 2009 and has been slowly building ever since it’s fair to say that she’s had moments of greatness and moments when less was better. This particular movie wasn’t so dialogue-heavy that it came off as a less than stellar attempt at creating something worth watching since while the action and the choreography weren’t all that great it wasn’t the worst that could have been drummed up either. To be nice, and fair, Gina Carano is someone that’s easy to believe in since she’s been there and done that when it comes to professional fighting, so she actually knows what will work and what won’t. But it’s also fair to say that she might not have as much say on the set as others do.

If there’s anyone to blame when it comes to this movie being a little less than desirable, Gina should take the least part of it since the dialogue is a bit forced and the action, as mentioned, could have been a little better. The movie isn’t the bottom of the barrel when it comes to action movies, far from it, but one can’t help but wonder about the overall script and how it was plotted, not to mention how they came up with the dialogue. Many people might want to debate how dialogue should really sound, since the truth is that for each movie the dialogue is going to change and, understandably, it might feel off to some folks that don’t like the way it sounds. However, the dialogue in this movie does feel a bit out of whack with the characters and could have been constructed a little better.

It is a little surprising to see Richard Dreyfuss in a movie such as this since quite often he’s all about dramatic and comedic roles where he tends to excel. Seeing him as a grizzled old hunter that’s kidnapped a woman’s child because of something her father did to him long ago feels like a petty and not entirely solid plot. There was a definite direction here and there was enough of a story to push in a very strong and guided manner, but without trying to disrespect the director or the screenwriter, this movie kind of needed another look or two before being filmed. In other words, it felt a little too rushed.