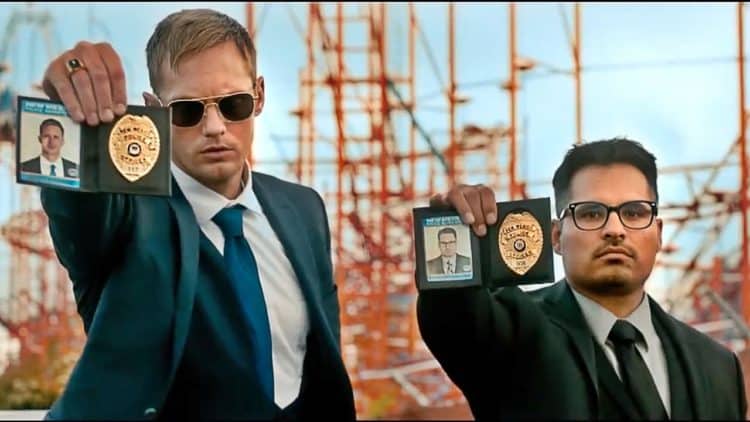 Movies about corrupt cops are usually highly dramatic and action-packed affairs. But one thing they usually depict is a cop, or cops, seeking to clear their name from the corruption that appears to stain it, or leaning into it as they’re either the villain or the antihero that is the main point of the movie. The dark humor that’s present in War on Everyone kind of highlights how hard the movie is leaning into the idea that Terry and Bob are corrupt cops and aren’t trying to hide it. What’s funny is that they’re trying to manage their own lives while doing everything they can to do the wrong thing, which gets them paid, but also gets them in trouble. As the movie makes its slightly ponderous way forward though it’s fair to say that this is the way they like it, especially since they don’t try to change. One might think that this would make for a dull movie, and unfortunately, it kind of goes that way eventually as the movie doesn’t really set up a huge and noticeable redemption arc.

What it does is to eventually show how Terry and Bob’s lives do even out, kind of, as the movie rolls along. The fact is that the movie has just enough excitement to it that one might feel the need to watch it from start to finish to make certain that they’ve seen all there is to see. But despite the performances of the actors, which are easily good enough to keep a person watching, it’s still just as easy to look elsewhere while the movie is going since the overall story is, well, kind of lackluster. The whole idea of two corrupt cops that know they’re corrupt and don’t worry about the idea of trying to clear their names is kind of different, but it’s also something that one can’t help but think needs a bit of balance to it.

Watching this movie for long enough makes it clear that such a thing isn’t going to happen since even leaning into the family life of the two main characters makes it clear that any redemption that other characters might spurn or work toward isn’t present in this movie. These cops are made to be bad and they’re proud of what they do. There is a method to the madness, but it’s also made clear throughout the movie that the method is to add to the madness, not shy away from it. Things continue to move along in a manner that many might think would indicate that the main characters are, at one point, going to mee with a demise that’s glorious but still well-earned, or that they’ll continue to be the same people they are and for some reason get rewarded for it. Such stories can confuse those that aren’t used to them, especially since the main idea with many cop movies is that the cops will end up paying for their misdeeds and not get to ride off into the proverbial sunset, or they’ll reform and realize how wrong they were for doing whatever they did. This isn’t that kind of movie, and it’s made rather clear from start to finish.

Terry and Bob know what they’re doing is wrong, they know that they’re making the wrong moves, and yet they continue to make them as things roll forward. That is a big part of what makes the movie intriguing since otherwise, it might be a little too boring of a story to get anyone’s attention. Something about this movie makes it easy to keep watching, even if it doesn’t hold a person’s interest the entire way through. The fits and starts that come throughout this movie are kind of tough to deal with for an action movie since the balance and the flow sometimes feel as though it’s off-kilter and has a tough time catching up. Talking about the story is easily done within a few lines since it’s essentially about two corrupt cops that are bound and determined to do whatever it takes to bring down a man that apparently can’t be touched by the law while getting what they need in the same place.

Bashing the movie isn’t necessary, but explaining how it appears to thrive on the broken pace that is felt as the feature moves forward is bound to be taken as a matter of opinion. Some folks are bound to like this movie thanks to the actors, others might enjoy the action, and some will end up liking the overall story. Personally, it’s not that bad of a story, but it feels broken in a way that needs to be resolved with a few simple tweaks that might be able to bring it back into line. But then again, a broken story is a matter of perception that needs to be taken as-is sometimes.