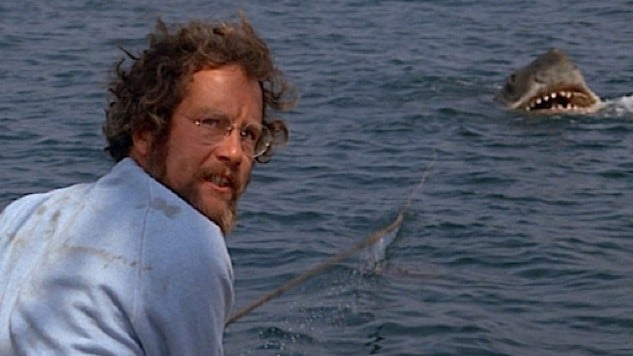 He’s not exactly the kind of guy you’d expect to find in an action movie or anything that’s not even remotely intellectual since to be honest Richard Dreyfuss is kind of a smaller guy that looks as though he belongs in academia, not on the set of a thriller or anything else. But the fun about Richard is that he’s proven throughout the years to be a very astute and comical character that can add his acting talent to many movies in a very interesting way that allows him to be named as one of the better actors of his generation and others. While he’s taken his lumps throughout the years from a few duds that he’s made and things that he’s said it’s still fair to say that a lot of people tend to like him well enough to watch his older movies again and again and enjoy the good times he’s brought us throughout the decades.

5. Close Encounters of the Third Kind

This movie was a modern day phenomenon in its time since many people couldn’t decide if it was super creepy or absolutely wonderful since the aliens in this movie weren’t out to hurt people but their presence did seem to worry a lot of them. Unlike many other alien films that were made around this time however the tone of this movie was actually quite positive in terms of the aliens meeting with the humans. The buildup to it was kind of interesting since Roy in particular became absolutely obsessed with the idea of reaching Devil’s Tower in Wyoming after having felt drawn there for a short while.

Bob is that guy that has no idea how to handle anything in his life and is nearly crippled by the thought of having to do anything for himself. Somehow he perseveres and finds his new doctor, Leo Marvin, at his vacation home with his family. What ensues shortly after is a type of ongoing therapy in which Bob does get notably better with time, but Leo starts to go absolutely insane. The kind of person that Bob represents is someone that would likely drive a Buddhist monk to distraction, so it’s not much wonder that Leo starts thinking of ways to get rid of Bob, but to no avail as the unwitting patient is somehow just too wrapped up in his own issues to notice.

You know how it goes, when you can’t make it, fake it, or something along those lines. After being respected and having fallen on hard times James is pressed to justify how he’s spent the funds that were given to him for research purposes and therefore has to make up his own native tribe so that he’s not accused of fraud. His family, save for his daughter, goes along with the ruse, as does a fellow anthropologist whom he starts to fall for during the deception. When his fraud is almost discovered however his daughter ends up bailing him out as she contacts an actual native tribe that the family befriended on their travels.

Some people still get a little pensive when they hear the theme to this iconic movie since it’s actually kind of scary when you think about it. The whole concept of Jaws made a lot of people scared to even go near the water, even if they weren’t at the ocean. The act of vilifying the shark in this movie however did have serious consequences as people came to think that all sharks were maneaters and were better off dead. While it’s still a great movie and one that shows that no one is off limits, including women and children in a horror movie, it’s also something that had a huge cultural impact.

It’s ironic that a man who has such a huge love for music and helped so many would have a son that was born completely deaf. It was serious blow to Holland, especially since it meant his son couldn’t share in his passion. But lo and behold Cole came to understand his father all the same through a great many trials and Mr. Holland became one of the most revered and respected teachers within his institution, no matter that he had many hardships along the way. This movie is the goal that each and every teacher looks forward to at one point in their life, no matter their motivation for stepping in front of a classroom. The joy of knowing you’ve inspired so many is something that helps to complete a life, and to enrich so many others.

Richard Dreyfuss has made us laugh, cry, and laugh again throughout his career and no matter how his career has gone he is a treasure among the many.