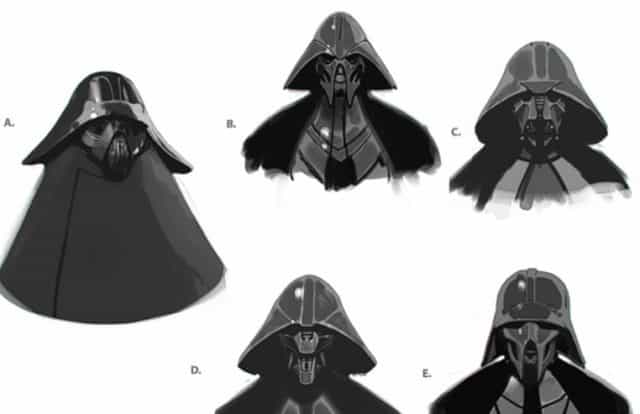 The concept art for what Kylo Ren of Star Wars almost looked like seems like it might have been a lot harder than people would think to come up with this new and troubled character. As the son of Han Solo and Leia Organa you would think that he’d be kind of a strong-willed scoundrel or a born diplomat with less than savory tendencies. But Ben Solo turned out to be something much worse when it was discovered by Supreme Leader Snoke, whose origins are still fairly vague, that he was a powerful Force-user. Being the nephew of the Jedi Grand Master and the grandson of one of the most notorious mass murderers in the galaxy however it was kind of hard to think that he wouldn’t be strong in the Force.

But his appearance, unlike Darth Vader’s, still doesn’t quite strike as much fear into the hearts of his enemies. He’s a terrifying character to be honest and his lightsaber gives him an added air of menace that’s hard to avoid, but his appearance is still somewhat less than Vader’s when it comes to the scare factor. For one thing he’s completely human, meaning that aside from his use of the Force he’s fallible, can be hurt, and is not quite the juggernaut his grandfather seemed to be. Plus, the menace that Vader carried was quiet and seemed to consume everything around him, whereas Kylo’s air of menace is a wild thing, more like a tempest than a brooding storm. His appearance also doesn’t fit the terror he’s supposed to strike in others, especially since he’s been seen to throw temper tantrums when things aren’t going his way. His helmet is perhaps the most impressive thing about him besides his lightsaber, and without it, since he smashed it to pieces in The Last Jedi, he’s not quite as imposing.

Getting the look of the helmet right though was key since it couldn’t look too much like Vader and yet it still had to have a kind of human design simply to fit his race. Also, there couldn’t be a lot going on with the helm, as it had to be somewhat simple and easier to accept, meaning that the crown that Vader had on his helmet had to go. Vader’s armor was specially designed to keep him alive however, where Kylo’s is simply to keep him covered and add an air of danger to his persona. Without his armor Vader would have died, if Kylo was to remove his armor he’d still be human and still be able to go on. So ornamentation was a big factor in creating Kylo Ren’s look. He had to appear tough even if inside he was kind of conflicted about what he was doing.

As an audience member it’s very easy to pass judgment on the looks of a character without realizing just what went into them. Each and every character in a story takes a good deal of time to come up with, and their looks have to match their inherent personalities and their character, otherwise things don’t come together as well as they should. Kylo Ren’s mask was undoubtedly a hard decision to make when it came to all the options that were laid out. But thankfully they went with the less is more approach.