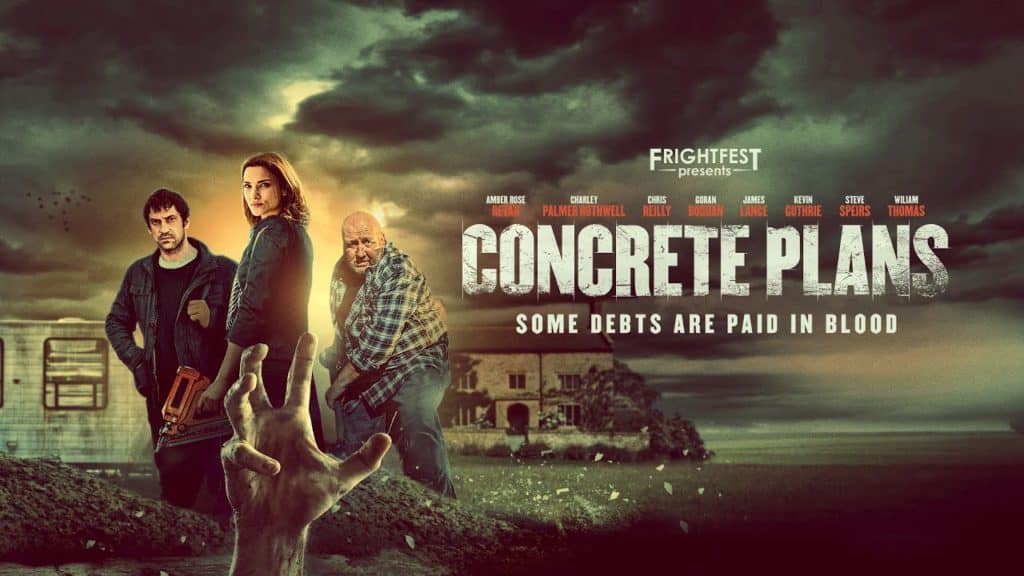 This is one of those movies that makes it likely to recognize a few actors if you’ve seen a number of indie or foreign movies that use these people since it’s very easy to think that a few of the faces in Concrete Plans should be recognizable thanks to their roles in other features. But the gist of the story is that a crew of five men is hired to renovate an old farmhouse far out in the country, far enough that a cell signal is hard to come by and the only other building is the homestead next to the area they’re renovating. When the homeowner, Simon, introduces himself it’s kind of obvious that he’s a bit uppity and doesn’t think too highly of the workers that he’s taken on. Bob, the foreman, is a decent enough individual, but he’s the type that one can obviously see likes to keep everyone happy as much as possible, while his nephew Steve is a jackass that doesn’t care what others think. Jim is kind of unnerving since he’s obviously a bit of a bigot, while Viktor, is the outsider of the bunch, and has his own particular secret that he stows under the trailer that all five men sleep in while on the job. Dave, the old man of the bunch, is kind of hard to figure out, but he’s easy to like.

Amy, Simon’s wife, and Richard, Simon’s advisor, both feel very out of place when it comes to their relationship with Simon, but that also feels as though it’s something that’s supposed to be there as another piece of the puzzle. The ground rules that Simon lays down for the workers are pretty simple since they tend to revolve around not going to the main house, even if there’s no way to keep to that rule since like it or not, workers are going to need to communicate with the homeowner. But when troubles begin between the workers, and when it becomes a bit obvious that they don’t like Simon and he doesn’t like them, it leaves a person thinking that no good can possibly come of this.  And that feeling is rather accurate.

As the days go by and the crew keeps working despite not getting paid on time as they expected, excuses are made, materials are bought on credit, and Bob becomes increasingly nervous as Simon is not keeping to his word. Those that have worked on a job such as this, or on anything that has to do with construction, know that the work is hard and that payment is expected when it’s promised, not when it’s convenient. The growing tension and unease within the group begin to build and build until after a while they start to snap at one another, making it clear that the conditions they’re working under are not what they expected, and that going without pay is not what was agreed upon when they first signed up. But another part about working in manual labor, particularly when there’s no regulation being followed, is that people will continue to work so long as they feel that they’re going to be paid, and that’s kind of what happens in this movie as the men are being promised payment when it can come, which means that they’ll keep doing the work so long as there’s a possibility that they’ll get paid.

But a breaking point is almost reached when, one day, Steve ‘accidentally’ drops a sledgehammer on Dave, and ends up breaking the old man’s collarbone. Not only does this make things worse, but as the men are already on edge, it’s not too long until Jim decides to raid the homestead to find the money they’re owed. While they do find evidence that Simon has money, they also find that it’s stashed away in an account that they can’t access. Even after beating Simon nearly to death, they have little idea what to do, but after a substantial amount of cash is found things get even worse as blood is spilled and eventually, not a single man is left alive as Jim and Steve turn on Viktor and Bob, while Dave is out looking for Amy, who escaped after nearly being kept captive. Viktor is stabbed by Steve, who in turn is killed by a nail gun. Bob commits suicide, and Jim is killed later in the woods after the wounded Viktor and Amy come upon him. Yes, it gets nuts, but it gets even stranger when Richard, Simon’s advisor, is shown to be in league with Amy.

The two planned to get as far away from the nearly destitute Simon as they could, but in the end, everything became so mucked up that they didn’t have the money and the plan had gone entirely awry. But the funny thing about this is that Dave wound up with the money in the end, which is kind of amusing and not too bad of an ending.