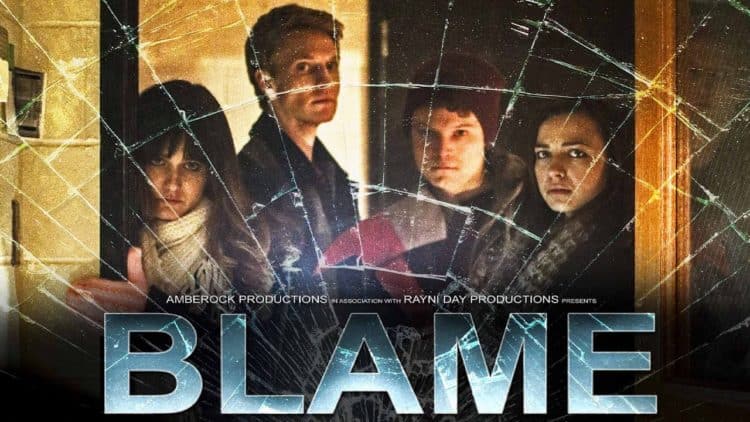 What people choose to believe and what’s real is easily separated by what people choose to believe sometimes. When a group of friends gets together to go on a planned vacation, it’s already evident that things aren’t quite as amenable as they all want to believe. Jordan and Andrea, step-siblings that are introduced into the story as part of a family that is obviously not as loving as can be, are friendly enough, but from the moment that Jordan tries to kiss his stepsister, who’s currently in a relationship with Jordan’s best friend Blake, it becomes easy to think that Jordan isn’t that great of a person, but neither is he a complete villain. We get to meet Blake, Mia, and Ella early on and come to find out that Ella is a model and someone that isn’t as emotionally stable as one might think. Mia is a stronger personality, while Blake is the type of self-assured individual that knows how to take care of his own needs but isn’t a perfect human being by any needs. In short, everyone appears to have a serious flaw in this movie, to begin with, but it’s worth giving them the benefit of doubt.

It’s kind of tough to do this after the kiss that Jordan tries to initiate with Andy, and the fact that Blake and Mia come out of the laundry room looking as though they’ve been up to something. Ella appears a bit oblivious as the trip is initiated and the group starts for their intended destination. Along the way, they watch a homemade movie that Blake and Jordan made when they were kids, in which it becomes apparent that Blake has been the dominant friend between the two for a long, long time. One can’t help but see this as a serious case of foreshadowing that would come into play later.

After a brief stop to figure out how much further they had to go, the group ends up getting stuck in a snowstorm, and following an accident which sees a tree limb cracking the windshield and thrusting its way through the front passenger side window, the group realizes they have to pull over somewhere to get help. The only problem is that they’re in the middle of nowhere and their only means of transportation is seriously damaged. Eventually, they do find a building that turns out to be an old, abandoned school that would likely give off a great number of creepy vibes to many individuals, especially considering that many horror movies end up starting this way and only get more intense. But as the group enters the building, breaking a window to get in, they start to have a bad feeling that they’re not alone in the place. As they go in search of anything, be it a flashlight or something more useful, the movie cuts away to a scene in which we see detectives and uniformed police officers poring over the building in the daytime, seeking answers to what happened the night before. The story does kind of get ahead of itself when it mentions that Andrea and Jordan are dead, but as the lead detective begins to question Blake, Ella, and Mia, the story they tell begins to differ from what actually happens as the movie continues.

Cutting back to the story, the friends go off on their own, and there’s an indication that there might be someone in the school, which is only strengthened when Andrea is found dead in a vacant room. Blake moves her body, trying to put her in the car to get help, but Jordan, who was pacing alongside his stepsister’s body, begins to unravel quickly as he finds it necessary to claim her as his sister, even though the others knew how he really felt about her. The survivors begin to quibble in a manner that’s not entirely convincing, but at the culmination of this movie, after Blake has taken up a bow and arrow for defense, while Jordan has an ax, things get even worse. Jordan is adamant about trying to get away from the school, but Blake has other plans as he fires an arrow into Blake’s back, killing him quickly, which is another sticking point of this movie since an arrow to the back can be fatal, but one that’s up that high on the back of a person’s shoulder isn’t bound to be fatal, at least not so quickly.

In any case, the movie finally catches up with the daytime investigation as it’s revealed that Blake, Mia, and eventually Ella, agreed that there had been someone else in the school and that they had killed Andrea and Jordan. The unfortunate discrepancies between their stories destroy their narrative, however, as Ella is unwilling to go along with the lie. Security footage that shows Andrea falling and striking her head on the ground, hard enough to crack her skull open, is revealed as well, making it clear that no one was to blame for her death. As the survivors are taken away in handcuffs, the lead detective watches the homemade video of Blake and Jordan before closing the hatchback of the SUV the group had been riding in, right before the credits roll. Needless to say, the movie had the possibility of being interesting enough to be great, but in the end, it felt more like a cross between the second Blair Witch movie and Riverdale.