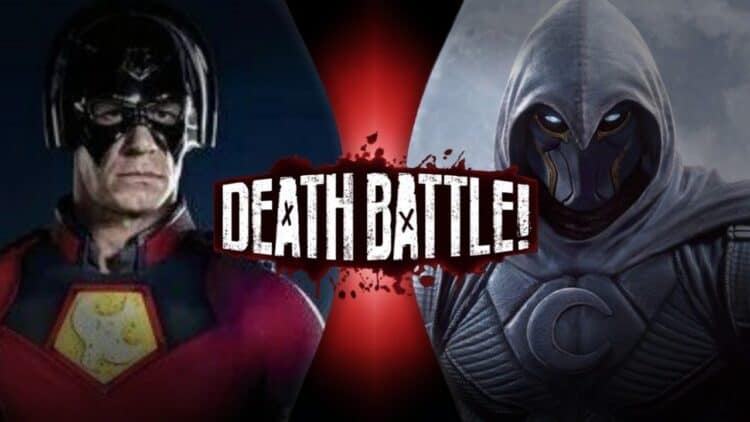 After watching both live-action shows, Moon Knight and Peacemaker, it’s not tough at all to say that both individuals are extraordinarily strong, dedicated fighters that are devoted and dedicated to the causes they’ve taken on as their own, and they both have had a rough time in their lives. It’s tough to say which is more traumatic, though it does feel that Marc Spector might have Peacemaker beaten on this one since not only did he accidentally get his little brother killed, but his mother actually shut down and refused to love him any longer. Because of this, Marc made up the character of Steven to simply go away when he needed to. Chris still suffers his own PTSD and pledged to fight for peace in any way he possibly could after the death of his brother. He didn’t experience DID as Moon Knight did, but Chris’s home life wasn’t anything to be proud of, especially since his father turned him into a killer. Marc at least had to wait for a bit to become a mercenary, but when he did, he went all-in, as did another of his personalities.

Calling this match is kind of tough since both opponents are incredibly strong, and skilled, and carry a variety of weapons on their person that can do massive damage. But of the two, Moon Knight’s live-action version is nearly impervious to any lasting damage, while Peacemaker is tough and can take a lot of damage, but his healing factor and durability aren’t anywhere close to MK’s. Plus, the level of skill when engaging in hand-to-hand combat does feel as though it would go to MK, but not for the reason that anyone might think. The final episode of Moon Knight season 1 brought forth a look at how Steven and Marc worked together in tandem, switching back from Moon Knight to Mr. Knight as they waded through villains to get to Arthur Harrow.,

It’s possible that Peacemaker would be able to catch onto this and adjust to each fighting style, but without any prior knowledge as to who he might be facing at any given moment, the initial advantage would belong to Moon Knight, and this would prove to be insanely dangerous since for all the damage that Peacemaker can take, Moon Knight can dish out a lot more, especially if Jake Lockley forces his way out and thrashes Peacemaker with Steven and Marc being none the wiser. That would be an interesting fight no doubt since at the moment it does feel as though Lockley might be the deadliest aspect of Moon Knight’s split personality considering that he strikes first and takes no prisoners until Marc or Steven wake up and resume control. But really getting into it, one would have to mention the weaponry since Moon Knight’s is fairly simple considering that many of his weapons are cutting, stabbing, or pummeling weapons. This is where Peacemaker might have a little bit of an advantage since his exploding bullets and other gadgets might cause Moon Knight a bit of a problem. Of course, that’s assuming that Moon Knight is going to sit still and let himself be shot.

Peacemaker has made it clear that he can fight with edged and blunt weapons since anything is a weapon in his hands. At this point, it would be who’s tougher, who has the stamina, and who can keep up with the other the longest. This wouldn’t be a fight to upstage each other since Moon Knight would likely be out for blood, and Peacemaker might be doing his best to put Marc down, which would be tough since without knowing which aspect he was fighting at any given time it feels likely that he might be overwhelmed if Moon Knight could switch up his styles as quickly as was seen in the live-action series. Even the comic book version might overwhelm Peacemaker, however, since he’s known to push himself harder, longer, and to accept the kind of pain that would force a lot of fighters to back down or even hesitate for a moment. Kind of like Batman, Moon Knight isn’t the type of character to hesitate or to back down when he’s fully engaged in a fight, but neither is Peacemaker.

In the comics, it feels certain that Moon Knight would prove to be too vicious for Peacemaker to handle, while in the live-action version there exists the possibility that even with his helmets, meaning the sonic boom device initially, it does feel as though Peacemaker wouldn’t have enough to keep MK down. There’s no doubt that bloodshed would be the order of the day, and that MK and Peacemaker would tear at each other with wild abandon until the bitter end. But at the end of it all, the belief is that Moon Knight would be victorious, even if he was in need of a nice, long rest.