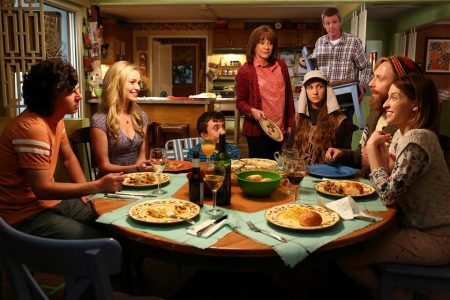 Time is catching up on The Middle as its season 8 premiere gave the Hecks a glimpse into their possible future.

Some people embrace change, others are more resistant to accept it. Frankie falls into the latter category when she finds herself overwhelmed by having to add 3 extra chairs to a family dinner. A dinner which she actually cooked, by the way. That alone is a huge deal for her when she’s so used to bringing home fast food. It’s not just the extra chairs though, it’s who is sitting in them and what they symbolize.

Axl had the biggest surprise of the episode when he brought April (Greer Grammar) home to meet the family. Frankie and Mike talk about the chances of her being “the one” for Axl, although her first (and second) impressions aren’t particularly impressive. Sure she comes off as being a ditz but I think that sounds about right for Axl.

Sue returned home from her summer at Dollywood with a newfound passion for theater. Contemplating changing her major to theater in addition to juggling her relationship with Jeremy, Sue has a lot on her plate. Nothing she can’t handle, of course, and it’ll be fun to watch her sort through it all.

Brick started high school with high expectations. He even tried to project a new image for the fresh start by growing out his hair and dropping his pizza bag for a traditional backpack. I think he’s got the right idea and he’s on the right track but he can’t expect anything too groundbreaking right away. Like his mother said, time flies and we just have to live in the present.

Frankie ultimately realized she may never have her “core group” alone together again if these significant others are indeed all that significant. She can hope it’ll be just them for Thanksgiving, but something tells me their holidays will be a lot more crowded from now on with all these new personalities trying to fit in. At least this season should be a “good” one!

The passage of time is not lost on Frankie as she sees her family growing right before her eyes when Axl brings home a serious girlfriend.