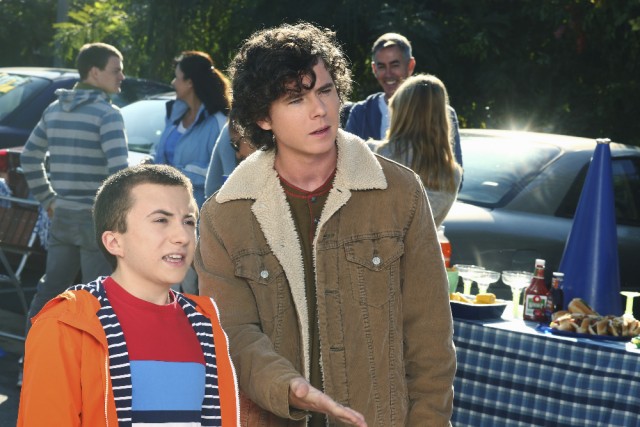 Parents and the circle of embarrassment caused by them are examined in this week’s episode of The Middle.  To really drive home the message, Frankie’s mother Pat comes to visit and the three generations of women come to terms with their roles in life.

Because it’s only been a whole six months since graduation, Sue finds herself as the class of 2015’s representative at the Orson homecoming game.  We did get one friendly face returning home from college: Sean Donahue.  His new hipster phase of life is hilarious, especially the way his mother reacts.  Nancy Donahue can’t be thrown by much, but she’s truly flummoxed by her eldest son’s choices.  I was hoping homecoming would be a perfect opportunity for Brad and Carly to come back too, or at least Carly.  For being one of Sue’s best friends all these years, it’s crazy we rarely ever get updates on her anymore.

Frankie was really at the center of all the parental problems here because she was on both ends of the stick.  Her mother mistook a friendly phone call for a recipe as an invitation, and in turn Frankie saw a lot of her own mother reflected in her actions towards Sue.  It’s one of the most universal cold hard truths that you’ll be embarrassed by your parents but usually you embrace that fact as you mature.  There’s probably also something to be said for having elderly parents, although Pat is still pretty spry and her asking Frankie’s friends for money towards the ingredients of her cake was actually pretty funny.  In that case I can relate to Frankie with having parents so money-conscious because they’re on a fixed income.  Seeing how the Hecks can really stretch a dollar, it wasn’t hard to see that the apple didn’t fall far from this tree.

Just as Frankie was looking for an escape from Pat, she found herself unknowingly embarrassing Sue in front of old classmates with her boozy blue tongue.  In the end, it was a blessing Grandma Pat came to town because Frankie needed the unconditional love you only get from your mother.  She was there to hold her hair back as she hung over the toilet, either from a nasty Frankie-tini hangover or more likely the stomach virus Axl brought home to share.

Poor Axl wasn’t feeling himself after catching a stomach bug at school.  I’m sure most of us can relate to his sentiment of only feeling comfortable to be sick in the bosom of his own family.  While it’s not unreasonable to expect some sympathy and parental doting when you’re feeling under the weather, Axl definitely went to the wrong family for that.  He was quarantined to his room for fear of spreading the virus to everyone else, when ultimately they all got sick anyway.

With Axl down, Brick stepped up as the unlikely cornhole partner Mike never expected.  Sports are far from Brick’s comfort zone, but he has enough experience with the gentle tossing of his books to translate into a good cornhole player.  Mike needed him to help bring home the big prize of a giant spatula at homecoming, and yet Brick suffered when under pressure.  It’s all good, though, because at least he had that brief period of time where his dad was surprisingly impressed by his athletic skills.