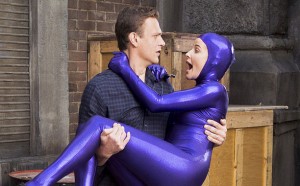 I did not think How I Met Your Mother was going to be able to feature any holiday themed episodes this season.  This was due to the fact that the entire season takes places during Barney (Neil Patrick Harris) and Robin’s (Cobie Smulder) wedding weekend.  I am under the impression the wedding happens during the month of May, which meant viewers could have been treated to a very special Mother’s Day tribute.  The latest installment entitled, “No Questions Asked,” was able to pull off an eerie Halloween theme without it even being set in October.

The episode picked up right where last week’s show left off.  Daphne (Sherri Shepherd) had just texted Lily (Alyson Hannigan) the news that Marshall (Jason Segel) had accepted a judgeship in the United States.  This would interfere with Lily’s plans of moving to Italy to further her art career.  Lily phones Marshall, but not because of the text but to tell him they are staying in haunted room #13.

Captain Deerduff was staying in that room when he froze to death.  Now his ghost haunts the room.  Lily does not believe in ghosts, but does notice that the room is cold, the shower drips, and the lock does not work. The front desk clerk blames this all on Deerduff, while Lily thinks it is laziness from the hotel staff.

In order to get the text message deleted from Lily’s phone, Marshall seeks help from his three closest friends.  First to arrive on the scene is Ted (Josh Radnor).  He climbs through Lily’s hotel room which startles her.  He decided to help Marshall out “No questions asked” because Marshall rescued Ted from a mailbox.  I thought his gag seemed really far-fetched, but was relieved that in the closing credits Ted is shown climbing into the mailbox due to a careless mailman leaving the front unlocked.  Ted sings Lily a song to get her to go back to sleep, but still cannot find her phone.  Then Barney appears through the air duct.

Barney also has a “No questions asked” agreement with Marshall.  He tried to swallow life sized objects that are the charms found in Lucky Charms cereal.  He also deuced his pants in Macy’s, so Marshall has a lot of dirt on him.  While the two look for Lily’s phone, room service arrives and gives Lily a $300 bill.  She leaves to go complain to the front desk. When she exits, Robin rolls out from under the cart wearing a very sexy purple leotard.  She had sought “No questions asked” assistance from Marshall when she was on an undercover mission and known as Night Falcon.  While Lily is downstairs, the trio figures out where cell phone is: in her bathrobe.

Ted saves the day!  He rushes downstairs and tells Lily to smash her phone “No questions asked.”  Previously, Ted had to help Lily after she was tied up by her kindergartners.  This was by far the funniest of the flashbacks from the episode.  Lily obliges and destroys the phone.  Ted reports back to Marshall to tell him the good news.  Ted then adds that Marshall must have thousands of his own “No questions asked” scenarios with his wife.  Marshall ponders this for a few seconds and realizes he does not have any.  Lily is the one person he shares everything with and has no secrets.

In the end, Marshall does tell Lily his news.  Her only response is though she does not believe in ghosts, someone is “going to die” in their hotel room this weekend.  Viewers are left with yet another cliff hanger to a truly superb episode and an overall excellent final season.  The ratings are still high and so are the laughs!