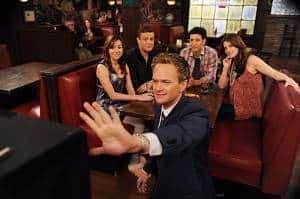 A change of heart…

Did Barney almost have one?

I must say I was excited when Barney showed up at the cafÃ© to meet Nora’s parents tonight and then I was just as easily instantly disappointed when we were shown he just watched them from the door and walked away. It seemed like almost for a moment, Barney had done what Robin wanted him to….he had grown up.

Much of tonight’s Barney/Nora storyline was told through flashbacks as a cardiologist explained irregularities in Barney’s heart rate to Barney and Lily. In light of Marshall’s father’s unexpected heart attack, the whole gang has decided to get their hearts checked out. Everyone was good to go but Barney, needing a little moral support, brought Lily along to his appointment.

We find out that Barney and Nora went on a couple of dates, one where Nora took care of him when he was sick and the other where she laid out on the table that she’d like to get married and have kids some day. Barney played along and let her know that he’d also like to get married; he even almost convinced his friends that he was changing his ways. Just as Nora asked him up to her apartment, he let her know the truth…. he was just saying all of this to get in her pants. But was he really? Lily seems to think since his heart skipped a beat on their date, that maybe he was lying about this lie.

I agree with her. It seems Barney isn’t ready to make that final step yet. He’s so close but just not quite there. Here’s hoping that step will be taken with Robin.

Meanwhile, Robin also had a new man tonight…Scooby. Yup, that’s right? His name was Scooby and as his name implies he was a dog. Not that ‘I’m a player who cheats on you’kind of dog but an actual dog. The cutie had some dog like tendencies (for example scratching his ears) and many jokes were had on his behalf. There was a good minute and a half in the episode where the gang kept going with references to dogs that was pretty enjoyable to watch. The gang lost Scooby after enjoying some ‘sandwich’brownies, read: pot brownies and some hilarity ensued from the situation. Otherwise, this storyline felt rather standard.

All in all, this episode was your basic run of the mill HIMYM which felt a tad bit lackluster compared to the gem episodes they’ve had lately. However, I still can’t wait for the next episode!

So what did you all think? Do you think Barney was really falling for Nora? This isn’t the last we’ve seen of her so what do you think’s next? What was your favorite blackmail story? Sound off in the comments below!