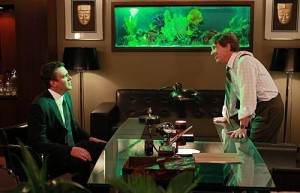 Alright HIMYM fans, so sorry for no review last week. Overall, I thought ‘The Stinson Missile Crisis’was an average How I Met Your Mother episode… not too exciting with a few laugh out loud moments but it was purposeful l in introducing Robin’s therapist/love interest Kevin (Kal Penn)

Last night’s ‘Field Trip’was similar. There was a whole lot of plot development but it never really grabbed me the way the really good episodes of HIMYM does.

After Kevin tells Robin, he can no longer be her therapist because of his attraction to her, they share a series of breakfasts and then finally a real date. While everyone (see ‘Pollster!’) thinks this new relationship is creepy, Robin is determined to let herself be happy and after a quick turn as his ‘therapist’they decide to continue their relationship. While I like the idea of Robin and Kevin (mostly because I love Kal Penn), I can’t help but feel like every relationship Robin has and Barney too for that matter is just stalling until they get together. Maybe it’s just wishful thinking but we’ll have to see how this relationship (Robin and Kevin) progresses.

Meanwhile Ted takes his students on a disastrous field trip which leads to Barney’s ‘Ewok’presentation and using Ted’s students as the best focus group ever. One of my favorite bits in the the episode had to be using Ted’s class as ‘Pollster’for all the debates Barney and Ted have ever had including ‘Jacob vs. Edward… James Olmos.’I mean really how perfect was that sample group? They could have done research studies!

Barney’s Ewok presentation was spurred by Nora’s declaration that she hates the ewoks in Return of the Jedi. In an amusing scene and power point I’d love to see, Barney describes the ‘˜Ewok’line. According to the line you only hate ewoks if you were at least 10 on May 25, 1973 therefore Nora must be lying about her age. (She’s not since she only just saw the Star Wars movies last year.) Seems Barney is just trying to find reasons to run away from his successful relationship.

It was nice to see Marshall passionate about his new job. Seeing him upset when he discovers his boss Garrison Cootes (Martin Short) has given up on the earth and celebrates a non-victory against Gruber Pharmaceuticals with three cakes. Initially resigning to this idea, he marches into Cootes’office and declares they cannot give up after seeing his new baby’s sonogram. They’re going to ‘war’and as Future Ted tells us they’re going to save the world.

Do you think Robin’s new relationship is creepy? Is Barney going to sabotage his own relationship? Most importantly, How do you feel about the Ewoks? Let us know in the comments below!
Prev Article Next Article