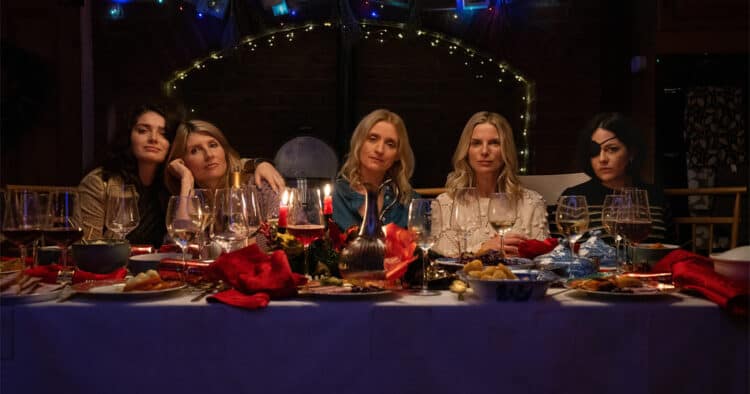 Straying away from the typical feel-good comedies Apple TV+ usually features, like Ted Lasso and Acapulco, the streaming service is set to drop a dark comedy thriller TV show titled Bad Sisters. The show is created by Sharon Horgan, who is best known for her work on Pulling, Catastrophe, and Divorce. Here’s a plot description from IMDb: “After the death of their father, three estranged sisters come together to steal back a priceless family heirloom, discovering each other (and lock-picking) in the process.” The show is largely based on Clan, a Flemish series created by Malin-Sarah Gozin, and will be set in London and Dublin. Bad Sisters features an interesting list of cast members. If you want to learn more about the actors set to appear in this show, read ahead. Here are the cast members of the upcoming Apple TV+ dark comedy thriller television series Bad Sisters.

Aside from creating the show, Sharon Horgan also stars in Bad Sisters. Horgan’s more recent work on TV include Frayed, This Way Up, Modern Love, HouseBroken, and Together. On film, she appeared in the recent blockbuster The Unbearable Weight of Massive Talent, which starred Academy Award winner Nicolas Cage. In the movie, Horgan plays Cage’s on-screen wife, according to Looper. Horgan has also performed in Military Wives, How To Build A Girl, Dating Amber, and Everybody’s Talking About Jamie. Horgan is a multi-awarded actress and writer. She won the 2008 British Comedy Award for Best TV Actress for Pulling and received multiple BAFTA nominations and one win for Catastrophe, for which she was recognized for her writing.

Anne-Marie Duff is also slated to star in Horgan’s new Apple TV+ series Bad Sisters. Duff is best known for her work as an actress and narrator, having received a nomination for a Laurence Olivier Award. Her more recent film work include Before I Go To Sleep, Suffragette, and 2017’s On Chesil Beach. On the small screen, she’s worked on Sex Education, The Salisbury Poisonings, and His Dark Materials. Alongside Bad Sisters, Duff is also set to appear in another upcoming TV series titled Suspect.

Eva Birthistle has been confirmed to join Apple TV+’s latest comedy offering Bad Sisters. An Irish actress and writer, she is most notably known for working in the romantic drama movie Ae Fond Kiss… Like her costars, Birthistle is also a multi-awarded performer, having won the London Film Critics Circle in 2004 as British Actress of the Year and won the IFTA Best Actress in a Leading Role (Film) Award twice.

Sarah Greene will be joining the cast of the upcoming streaming comedy series Bad Sisters. Greene played Helen McCormick in the West End and Broadway productions of The Cripple of Inishmaan, which earned her a nomination for the Laurence Olivier Award for Best Actress in a Supporting Role in 2014 as well as the 2014 Tony Award for Best Featured Actress in a Play. Greene also starred in Penny Dreadful, playing Hecate Poole. For the role, she won an Irish Film and Television Award for Best Actress – Drama. In the CBS series Ransom, she is best known for portraying Maxine. Greene’s most recent film work include Dublin Oldschool, Black 47, and Rosie. On the small screen, she played one of the lead roles in Dublin Murders and a recurring role in Normal People. She also appeared in two miniseries, Roadkill and Frank of Ireland.

Eve Hawson has also been confirmed to join the cast of the Apple TV+ series Bad Sisters. Her TV debut was in the TV show The Knick directed by Steven Soderbergh, portraying the role of Nurse Lucy Elkins. Since then, she’s appeared in two other shows, The Luminaries and Behind Her Eyes. Hewson has been pretty active working on movies. Her more recent film work include popular movies such as Paper Year, Robin Hood, The True Adventures of Wolfboy, and Tesla.

Danish actor and musician Claes Bang will be joining the cast of Bad Sisters. Bang is most prominently known for starring in The Square, portraying the character of Christian. More recently, he played the character of Fjolnir in the critically acclaimed movie The Northman. Some of the more recent movies Bang has appeared in include The Glass Room, The Burnt Orange Heresy, The Last Vermeer, The Bay of Silence, Locked Down, and Drawback. He is set to appear in an upcoming Irish thriller titled It Is In Us All, which is currently in post-production.

Brian Gleeson will also be a cast member of Bad Sisters. Gleeson is best known for his role in Love/Hate, for which he was nominated for an Irish Film and Television Awards. Gleeson’s most recent TV credits include Resistance, Peaky Blinders, The Bisexual, and Frank of Ireland. On the big screen, he’s appeared in Logan Lucky, Mother!, Phantom Thread, Hellboy, and Death of a Ladies’ Man.

Daryl McCormack will be playing a role in the upcoming Apple TV+ comedy series Bad Sisters. He’s appeared in movies such as A Good Woman Is Hard To Find, Pixie, and most recently, Good Luck To You, Leo Grande. McCormack also has an impressive TV resume, having starred in Fair City, his TV debut. This will be followed by appearances in Vikings, A Very English Scandal, Cleaning Up, Peaky Blinders, and The Wheel of Time.

Assaad Bouab will be joining the cast of Bad Sisters. Bouab is a French-Moroccan actor and has appeared in plenty of international projects, most notably the French comedy series Call My Agent!, where he portrayed a regular role. His most recent projects include Messiah and The Pursuit of Love. Bouab also has an extensive theater resume, having appeared in stage productions of The Plough and the Stars and One Thousand and One Nights.

Saise Quinn has also been announced to appear in the comedy series Bad Sisters. There’s not a lot of information about this actress, and it appears Bad Sisters is her TV debut.