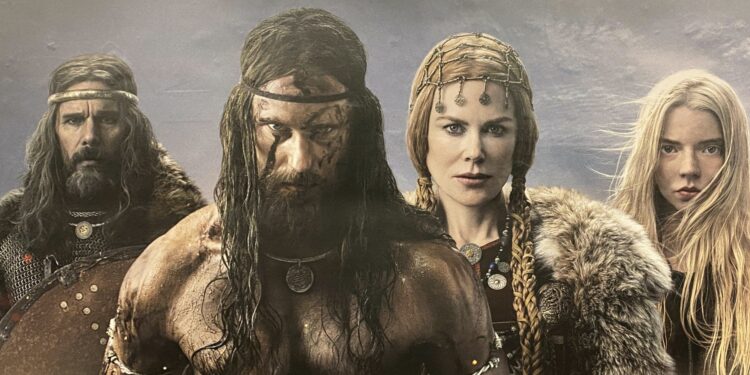 The Northman came upon a lot of moviegoers in a way that’s not too unlike the actual Vikings the movie depicts, in a swift and surprising manner. Even though the movie has taken a while from conceptualization to release, it’s still interesting enough that it warrants a close look along with a good deal of research. If there’s one reason why a lot of people don’t understand Viking culture, it’s that the Hollywood version of them isn’t all there is, and the truth is that they’re more than a little different than they’ve been seen in earlier movies and shows. Vikings on the History channel did a fairly good job of representing the culture, and The Northman manages to depict a situation in which the villain isn’t quite as cut and dried as people might want to see it. Revolving around Prince Amleth and his need for vengeance when (spoilers) his father is killed by his uncle, the story doesn’t become the glamorous, epic tale that a lot of people likely expected. But it does become a complicated tale of vengeance that takes its time developing.

After escaping his uncle as a boy and being adopted by a tribe of Vikings, Amleth continues to remember his oath, but the things he does along with his tribe indicate that despite his own traumatic past, Amleth is still a part of the culture he belongs to, no matter that it would appear that he’s fairly uncomfortable with the aftermath, though he doesn’t do or say anything. When he inadvertently hears of his uncle’s misfortune, which occurs when King Harald takes over, Amleth takes the drastic measure of branding himself and then sneaking aboard a slave ship bound for his uncle’s holding. Upon arriving, he’s not exactly given a warm welcome since the unfortunate fact about slaves in Viking culture is that they were a normal part of everyday life, and how they were treated depended heavily on the masters they were bound to serve.

When his uncle Fjolnir is convinced to keep him and several others on, it becomes kind of obvious that Fjolnir might be the man in charge, but he’s still fallen on hard times after the death of his brother and the loss of his kingdom to King Harald. He still has his people, his land, and his slaves, but as Amleth makes certain moves to earn the trust of Fjolnir and his people, things begin to happen as Amleth, following the vision he received earlier in the movie, finds a weapon known as the Night Blade, which can only be drawn at night. That sounds terribly inconvenient, not to mention that tends to reinforce the idea that Viking culture and their beliefs went hand in hand as they weren’t always honorable, but they weren’t the outright demons that the English wrote of so long ago either. The Vikings were complicated people since they weren’t just raiders, and they weren’t just farmers either. Much like many cultures, the Vikings were complex enough to be tough to figure out at times. Watching this movie would make that painfully clear since it’s fairly easy to see that Amleth’s father loves him, but doesn’t have a lot of regard for his wife.

Fjolnir is a cruel but practical man, who also loves his family, but is revealed to have little care for anyone else that is not counted as one of his trusted clansmen. When Amleth attempts to liberate his mother he finds out that she begged Fjolnir to kill Amleth’s father, as she was unhappy, and that he was a product of rape. Worse yet, Gudrun attempts to seduce her son before he leaves her room, whereupon he stabs Thorir, Fjolnir’s eldest son, to death before taking his heart. When Fjolnir begins to execute slaves to find out who killed his son, Amleth appears and agrees to give his uncle Thorir’s heart if he allows Olga, the young woman he’s fallen for, to go free. After his capture, Amleth reveals that the heart he’s given back isn’t Thorir’s, and Fjolnir beats him within an inch of his life before Amleth is freed by a trio of ravens.

The long and short of the movie is that Amleth does get his revenge on his uncle, but not before having to do a couple of things that he’s not proud of, such as killing his mother and her younger son, Gunnar. Following this, he meets his uncle at the ‘gates of Hel’, a smoldering volcano where the two do battle until the end when Amleth and Fjolnir each fall. In his final breaths, Amleth sees Olga and their twins, and his final ascent to Valhalla. Taking in this entire movie requires a moment since it does have to be said that there wasn’t any glamorized view of the Viking culture, but then again, apart from the supernatural aspects, nothing about this was so over the top that it could be said that it was untrue.