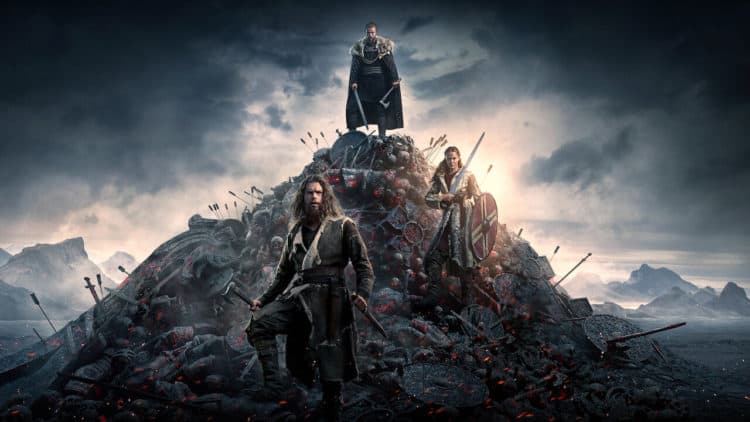 In case you were wondering, yes, spoilers are coming. Vikings: Valhalla is worth every minute of runtime, and even better, it’s set so far into the future of the Viking era that we get to see a younger Leif Eriksson make his way to Kattegat to support his sister, Freydis, in her quest for vengeance upon a Christian Viking (I’ll get into that) that raped her prior to this story. Not only that, but he carved a crude cross into her back, as is discovered when she lifts her shirt at one point. The first season of this show starts off in one of the best ways since the time of Ragnar Lothbrok is long over, as is that of his sons, but all of them are still remembered fondly as they are the stuff of legends now. Plus, the descendants of those from the first show are still around as well, as the descendants of King Harald from the initial series are a major part of this season. Harald and Olaf, who share the same mother, are brothers who each have their own desires and wants when it comes to ruling Norway, while Kattegat is under the rule of Jarl Estrid Haakon, a dark-skinned woman that is loved by her people and adds a bit of diversity to the Viking era.

In case anyone was wondering, this is backed up by history since the Viking clans were a diverse lot that were known to travel far and wide. There’s no doubt that this show has already taken several liberties with history and even the likelihood of certain things happening, but how it’s been done is great since it threads into the overall story without any issues. The Vikings weren’t known for being cute and cuddly after all, nor were they known for being good neighbors at all times. But they were known for being just as vengeful as anyone else, perhaps even more so at times. The manner in which the season starts shows why they’re so bent on revenge since for the past century since the ending of the original show, it would appear that the pagan and Christian Vikings have been living in peace, no matter that they tend to resent each other.

And yet, Aethelred, the current king when this story begins, reveals during the St. Brice celebration that he had no intention of keeping the peace as he was intent on driving the Vikings from England once and for all. When he orders the deaths of all Vikings on English soil, he begins a war that takes several interesting turns before all is said and done. When the massacre begins, only a handful of Vikings escape, including Prince Harald, who vows to take the king’s head upon his return. When King Canute of Norway hears this he gathers to his hall every warrior he can find and after a bit of verbal sparring with the new king, Aethelred’s son, a very weak-looking character named Prince Edmund, King Canute manages to outfox the young prince and assumes control of London.

The number of betrayals in this first season is amazing since Viking strikes against Viking and the English plot and scheme against each other as well. By the end of the season, Kattegat has fallen briefly into Olaf’s unworthy grasp, but he’s chased off by King Canute’s father, Forkbeard, not too long after. The throne of England is secured under King Canute and Emma of Normandy, who is also the Queen of England. The attempt to wrest England for the control of another. Throughout the story, Leif Erickson and Freydis Eriksdotter, and Leif Eriksson evolve as well, as Freydis ends up becoming a shieldmaiden, while Leif ends off the season covered in blood and yelling in a manner that makes one feel that he’s gone berserk. That alone would make a lot of people believe that there’s another season on the way, and the fun part is pushing the thought that two more seasons have already been given the green light. If they’re anything like the first season one can bet that this show is going to be a perfect successor to the original Vikings.

The fact that the season ends on kind of a bleak note is enough to make one feel that there’s going to be another big shift in the story as Christianity has nearly consumed the old ways, which is bound to make a lot of viewers feel a certain way about the show. But as the season comes to a close after the eight-episode run, it’s enough to make a person wonder what’s going to come next. with the current status of the main characters and the possibility that someone even worse might be on their way in the next season, it’s fair to think that what we’ve seen at this point is going to be just the start of something that’s going to be every bit as impressive as the show that kicked everything off.