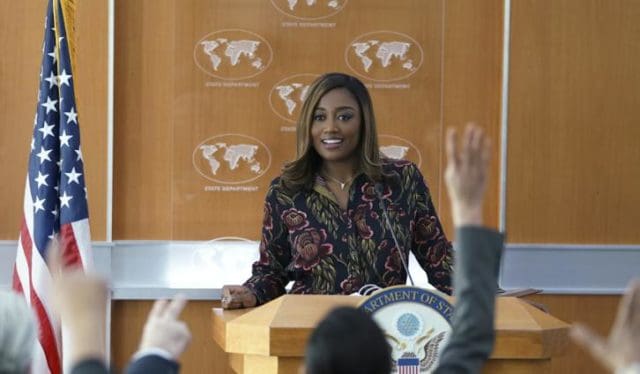 The hour began with a glimpse into the daily routine of Blake. It’s interesting to see just what goes on behind the scenes as Blake gets ready for his day. Though I find his choice of alarm tone unique for lack of a better word. There’s also no previous mention of him owning a cat. Imagine my shock (albeit it was a slight shock) to see a feline in his studio apartment.

When the subject of the imprisoned journalist came up, it made me think of those reporters who would stop at nothing to get to the truth. Yes, sometimes it may cost them their lives, but it’s the sacrifice that they make to shed light on matters that are important to them. Granted there are certain types of journalists out there who would fabricate the truth rather than present it as it is.

It’s also nice to see Jay get back into the dating scene again. He needs some happiness in his life after everything that he went through. The scene where he confessed his late-night liaison with Sofia to Nadine made me chuckle. Good for you, Jay, good for you. Speaking of Nadine, it seems that she is not yet ready to put herself back out there. Mike B. still seems to be interested in her aside from the fact that Nadine never returned his calls. Love truly is mysterious, I’ll give it that. Maybe Nadine should consider pursuing a relationship with Mike B. He definitely looks a lot more cheerful when he’s not in a, as he so aptly put it, the “Mike B. show”.

Daisy’s impending pregnancy threw me off a little. That and the father of her unborn child is the late Joseph Garcia. I have to agree with Elizabeth though, Daisy has nothing to worry about. She’s going to be a great mother. Besides, she has both her family, Joseph’s family and her work family to help her should she need it.

My heart went out to Matt when he suffered a short bout of Writer’s Block. I know the feeling all too well. The hours spent staring at the screen, hoping that something will magically appear, but it’s all for naught. It’s okay, Matt! I feel your pain!

Circling back to the journalist, Colin Mitchell turns out that China was behind his imprisonment. Well, at least the Chinese were gracious enough (to an extent) to release Colin. The latter was airlifted to a hospital in Germany before making the journey home to the United States. As for the religious cult, no new information has been revealed yet. Maybe the next episode will shed some more light.

Elizabeth works to save an imprisoned journalist as Daisy gets the surprise of her life in this week’s Madam Secretary.