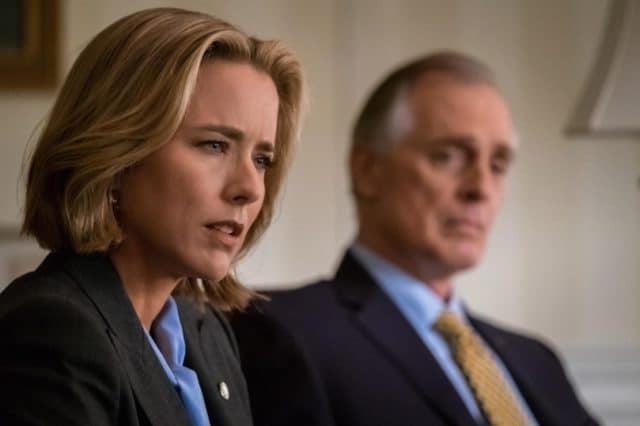 A scandal, no matter what it is, is never good for one’s reputation, especially that of a government employee. In this week’s episode of Madam Secretary, Elizabeth tries to put a stop to human trafficking in Kyrgyzstan. That and dealing with an international sex scandal. Alison also debuts her midterm fashion project for school.

When Ambassador McDonald confessed to her adultery to the secretary, I was as exasperated as Elizabeth was. This scandal not only put a damper on the Human Trafficking Summit, but it also gives Senator Morejon more ammunition to fire at the Dalton Administration. At least the government shutdown is over, so I guess that’s a silver lining right there.

Things then got worse when the man that Ambassador McDonald was seeing turned out to be a Russian spy. That, and there is a cyber attack on the U.S. government’s servers. All of the secret military and political strategies are out in the open. Oh, and the Russian spy is also President Nogoyev’s brother-in-law. The latter didn’t even know about it until it was too late.

Dmitri also returned to work at the CIA after his brief stint in rehab. Hopefully, he has conquered his demons (sorry, Mazikeen) and will keep a level head. I am intrigued to see him be in a relationship with Stevie after the eldest McCord gets over her broken engagement to Jareth. It is also a shock to see him take up knitting. I guess it’s something to occupy his mind, but he could have taken up writing too. I mean, he could have finished a small novella with all that time.

Circling back to the human trafficking issue, after strong-arming President Nogoyev with the threat of freezing his bank accounts, the Summit is back on track. All of the signatory countries have returned to the table as well. Kudos to Elizabeth for using a Madonna reference of her own to stick it to the president!

I loved the dress that Alison made for her midterm project. I wouldn’t wear it because I can’t pull off something like that. Maybe Stevie could use it as an engagement dress if she decides to put herself out there again. The eldest McCord did look stunning in it. Her modeling of it didn’t go as well, as evidenced by the video shown afterward, but it was pretty last-minute as her sister begged her to help despite Stevie’s stage fright. The things we do for family, right?

The pep talk Henry gave Alison was nothing short of inspiring. Wish my parents gave me pep talks instead of lectures.

My heart went out to Stevie after she told Alison that Jareth broke off their engagement. Even though they tried to make it work, in the end, I guess they just weren’t ready to get married. Perhaps they can remain friends after all this heartbreak blows over?

The whole Godfather moment between Henry and Senator Morejon was awesome. Then again, Elizabeth is perfectly fine fighting her own battles; she doesn’t need her husband to do it for her. On the other hand, it was lovely of Henry to stand up to the senator when the latter went after Elizabeth.

I also loved the tender moment between Elizabeth and Henry as the latter prepared to go to Afghanistan. The two traded reading glasses as a promise for Henry to return home safely. When Elizabeth told Henry to get his arse home in the situation room like a relieved worried wife, I half-expected Henry to say “Yes, Dear.” instead of “Yes, Honey.” but I’ll take what I can get.

Things hit close to home as Elizabeth pulls the plug on Kyrgyzstan’s human trafficking and faces a cyber attack from the Russians in this week’s episode of Madam Secretary.