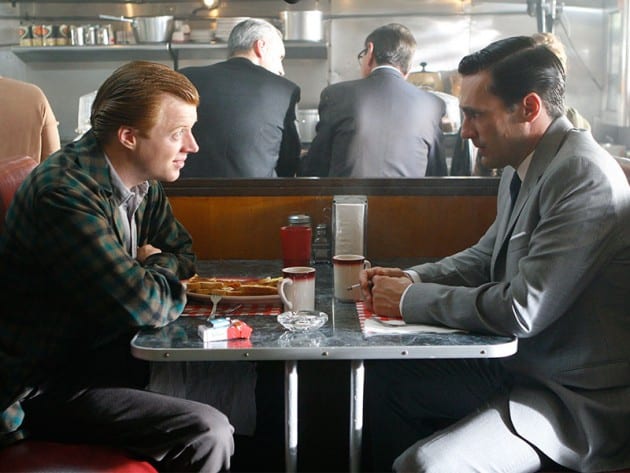 Mad Men found its legs by the end of the first season. The characters, more or less, had settled into the personalities we’re most familiar with. This fifth episode, I think, is the turning point for that settling down. Weiner seems to have a much stronger grip on the material, and the characters, and the world.

He seems, especially, to have a better grip on Ken Cosgrove.

Ken Cosgrove is probably my favorite of the recurring cast. He became a hero as the series progressed, and has always stuck in my mind as a stand-up guy. But he really wasn’t until this episode. He was what one would describe as a cad, or a simpleton, or a disgusting misogynistic piece of trash. His attitude towards Peggy and Joan in the pilot is so excruciatingly piggish that it makes you wonder if he had an evil twin. But no, not quite.

I don’t think that it’s unfair to say that Cosgrove’s transformation into a legitimate human being was out of left field. He went from unbearable to a pinprick of light; he went from purposefully boorish to soft. Why? I don’t know. Perhaps Weiner saw something in Aaron Stanton; even when Ken was at his most evil, he still had a light in his eyes and a song in his heart. Perhaps he felt he was better served as the counterbalance to the swift descent of Kinsey and Pete. For my money, I am happy that Ken became who he was to be, but I would’ve loved to see someone with that kind of charisma go full heel.

His fiction writing career is something that sticks with me, always. I find the reactions to it by Pete and Kinsey fascinating. Both of them aspire to be writers (because who doesn’t?), but neither of them has the skill or temperament to do anything worthwhile. Pete at least has something to show for it, with that surrealist piece that he pimped his wife out to publish. Kinsey reveals himself more and more to have the ceiling of a mouse hole, and the floor of an ocean trench. Ken, as would be common in later seasons, has already risen to the top.

I am not happy, I suppose, at the abruptness; I’ve already stated this, but I feel it’s worth repeating. For as much as Mad Men is praised for its character work, this was a shortcut that no show could do in this day in time. 2007, right before the boon, was the only time a prestige show could really get away with such unexplained character work.

I forget sometimes how wobbly this show was at the beginning; great, yes, always and forever and of course, but wobbly nonetheless. The subtlety of motivations and plot and thematic relevance isn’t here yet, not all the time. This episode in particular is about as subtle as a kick to the head.

It’s almost to much to bear, watching Adam Whitman lose all hope. You see a little spill out of him from the first interaction at the office; you see him spring a leak at the coffee shop; you see it drain from his face in the hotel room. It’s so funny to me how much complaining Don will do later. It’s funny how much hand-wringing this man will go through, and how many visions he’ll have, and how many times he will run. It’s funny that he’s so desperate for human companionship when the single person in the entire world that ever came looking for him was dismissed with cold cash.

Don can’t see what’s done. He doesn’t even register it. I’d say he was wearing blinders but he never looks anywhere but forward anyways. To crib a line from our hero: what he did to Adam was as cold as the driven snow. Adam is taller than you. Adam is a part of you. Adam is as much as you. Adam cries in your arms, and you leave the hotel room and you go home. Before that, you burnt his picture. You didn’t have to. You could’ve stuffed it in the trash or fed it to the damn dog. You could’ve done anything, but you knew that you couldn’t let the picture go and so you burned it so it would be both here and far, far away.

This episode isn’t the best in Mad Men‘s run, but it is one that burns me all over. Don doesn’t want anything from anyone that he can’t take a flame to. He lies, he cheats, and he does it all over and over again. We have to root for this man for seven season, and it’s a task, most of the time. I sometimes wonder why I stick with him so closely, even now.

Perhaps it’s simple training. Don is our protagonist, so we follow him; there was no shortage of people who supported Walter White to the bullet-ridden end. But I have to hope that it’s something more, because even as I rewatch this, I lose affection for Don. Perhaps by the time I am through with all this there won’t be any left.

Joan is still unbearable at this point in time, and I look forward for the day in which this isn’t true. She is neck deep in the most terrible environment imaginable, and yet she survives and thrives. She got the express elevator, all the way to the top of the ladder. Problem is, she took the wrong ladder, less rungs, less height. Where as Peggy will eventually ascend past the glass ceiling, Joan will struggle. She took the only safe path for a woman at the time, as a member of the boys club; she mistook being a toy for being in charge. She’ll have to work twice as hard to convince the men that she’s worth more than just a locked door and a push to the knees.

Peggy is already blossoming, and challenging the world around her. She never imagine what this job would entail, but as she grows into it, she realizes that she’s better than it. To be a gatekeeper of secrets and a pair of spread legs to cry on might get you a few nice hotel rooms and some hush money, but it won’t get you to the top. The problem is that women really don’t have a choice. They either do what the men want or they are punished for it. Joan made the only choice she could, and paradoxically what little respect she has managed to garner reflects well on Peggy.

Betty asks Don, returning from his run over Dresden, whether he wants to visit the kids. It’s a loaded line, phrased as such with intentionality, and it hits the mark. Father’s don’t visit with their kids, but strangers do. Even unconsciously, Betty knows how far away Don is. Even unconsciously, Don doesn’t really care about them. He doesn’t see his kids, stranger or otherwise. He climbs into bed, and Betty puts her head on his chest.

“I have a life, and it only goes one direction: forward,” Don says. His kids, his wife, his friends, his lovers; they are all expendable. As long as Don is going forward, Don is still Don, and Dick Whitman is dead. But if he were ever to stop running, even for an instant…