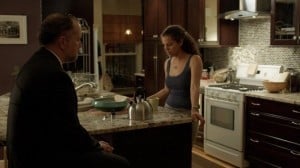 If you are a TV enthusiast like I am, you most likely spent last night watching Neil Patrick Harris host the 65th Annual Prime-time Emmy Awards. If that is the case, you may have missed the latest episode of Low Winter Sun entitled, “There was a Girl.” Lucky for you, I was able to record it and fill you in on the latest happenings in the Motor City.

The episode begins with Damon and Maya cuddling in bed dreaming of moving and starting over.  Those dreams are quickly shattered when Frank and the DPD arrive with a search warrant.  Frank brings Damon in for questioning with Maya in tow.  Frank and Geddes are not only trying to pin the murder of Billy Hobson on Damon, they are also planning on framing him for McCann’s slaying.  When Damon starts talking smack to Frank, Frank takes matters into his own hands.  He escorts Damon into the bathroom and with the help of Geddes repeatedly dunks Damon’s head in a toilet.  And this all happens before the first commercial break!

When the show returns, Khalil is questioning Damon’s friend Gus.  He elects to blame Michael for the crime, since he is already dead.  Damon also casts blame on Michael when things start to become heated in his interrogation room.  Elsewhere, Steven is being interrogated by Geddes and will not admit that Michael is the killer.  Since all witnesses are not accusing the same person the interrogations continue.

At this point, Damon asks for a deal and tells Frank and Geddes that he has key information that is even more important than Billy Hobson’s death.  Geddes goes crazy and beats Damon up before he reveals any of the information he has.  Geddes is placed on two weeks probation and asked to leave the precinct.  Khalil then admits to Frank that she re-interviewed the witness who placed Geddes and Frank at the scene of McCann’s murder.  Khalil is certain Geddes has something to do with the killing, but Frank quickly brushes it off in order to get Khalil to stop investigating.

Later in the day, Geddes and Frank meet up at Geddes house to discuss what went down in the interrogation room.  They venture out in Geddes boat so they know they are alone.  While on the water, we get a glimpse of the beautiful Detroit skyline at night.  Many people assume all of Detroit is dirty and dilapidated.  Most of the scenes on Low Winter Sun show that side of Detroit, so it nice to see a pleasant view of the city. Frank becomes furious with Geddes for taking his anger out on Damon.  He would have been the perfect person to accuse of murdering McCann.

Finally, Geddes spills the beans to Frank on why he needed McCann killed.  He knew McCann was a dirty cop and was getting paid to keep quiet about it.  He even paid off the Medical Examiner to change the cause of death for all the murders McCann and Skelos committed. Geddes had enough and decided McCann needed to die. He knew he could not do it alone and sought aid from Frank.

When Khalil is at home, she gets a visit from Simon Boyd.  She confides in him her suspicions of Geddes murdering McCann.  Boyd adds that Frank may have something to do with the crime as well.  Khalil still is under the impression Frank is a good man and isn’t as dirty as all her other colleagues.  I have a feeling she may be changing her tune very shortly considering there are only three more episodes left to the season.

Back on the boat, Geddes and Frank still have not decided what to do about covering up the murder.  Frank wants to go back to shore and Geddes refuses to take him.  In order to get his point across, Frank flashes his gun and shoots the boat and they begin to take on water. Point taken!

By episode end, Damon is released from jail.  He knows the cops are still looking for him, especially Frank.  Frank and Geddes are running out of ideas and with Khalil getting closer to finding out the truth, they better figure out whom to blame for the death of McCann.  Low Winter Sun is finally heating up! 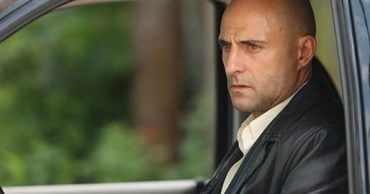 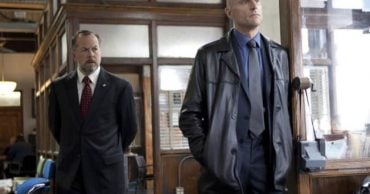 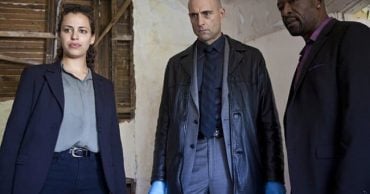