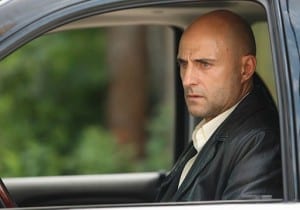 Anyone who has a television knows that Breaking Bad ended its five season run last week.  Just because Breaking Bad ended, that does not mean the sun has set for Low Winter Sun just yet.  With two more episodes to air, AMC decided to broadcast both last night for a special two hour season finale.

The first episode entitled, “Ann Arbor” completely focused on Frank’s spiral into craziness. After last week’s rampage on the bordello that employed Katia, he has been on the run.  He refuses to report to work.  Knowing the cops are watching his house, he asks Sean to bring him a “care package” in order to skip town.

After causing a scene at a local bank and fighting with a few construction workers, Frank heads to the airport to board a flight to Germany.  He has a heart attack in the parking lot.  A woman runs to his aid and Frank, being the noble man that he is, steals her car.

Frank then drives to Ann Arbor (Go Blue!) and visits his ex-wife.  After the two get into a heated argument, he threatens to take his own life.  She calms him down and after her husband returns home, the police are called.  They then make the 45 minute trek to the Motor City to drop Frank off at the DPD’s precinct.  When he goes inside, he finds out that Sean has turned himself in for McCann’s murder.

In the second installment titled, “Surrender,” Frank questions Sean about every minute detail involving McCann’s slaying.  He does not want his close friend to go down for the crime that he committed.  Geddes feels the exact opposite.  He is happy they finally have someone in custody so he can save himself from going to jail.

Khalil is still positive that Geddes, and now Frank, are behind McCann’s murder.  When Sean visits the murder scene, she begins to question him.  With some guidance from Geddes, he is able to tell a believable story.  The pieces are all starting to fit into place.  Now enter Lt. Boyd.

Boyd has been out to get Frank and Geddes since episode one.  He holds a meeting at the mayor’s office offering new evidence that proves Frank and Geddes are the true killers.  Boyd ordered the medical examiner to rerun the tests to show what food was still in McCann’s digestive track.  The food he had ate at the restaurant before drowning was found, which means he was killed right after he ate and not when his car went into the river.

Another piece of evidence Boyd shows is the video surveillance tape displaying the exterior of McCann’s house.  When questioned earlier in the season, Frank stated that the stumbling man on the tape was McCann.  Boyd believes the man is Frank, since McCann has already died at the time this footage was shot.

The mayor does not believe Boyd.  Since someone has already confessed to McCann’s slaying, she commands the witch hunt on Frank and Geddes to end.  A furious Boyd bashes his laptop against the table and vows that he will make sure Frank and Geddes go down for this homicide.  He then returns home and begins to watch the surveillance tapes.

The final scene depicts Franks visiting the morgue to claim Katia’s body.  He asks the coroner if he can take ownership of the body in order to hold a funeral.  The coroner agrees and asks for a verification of identity before the body is released.  Frank stares blankly at him realizing he never did know Katia’s real name.  And that is how the season finished.  I am sure I am not the only one who screamed at my TV asking, “Was that really how that ended?”

Low Winter Sun was average at best.  And though the first hour of this finale was unnecessary, the second half really did pull me in.  The renewal of this show is still up in the air.  After Frank and Geddes were not jailed for the murder of McCann, I would like the show to continue until justice prevails.  What can I say? I want the good guy to win, and he has yet to do so.