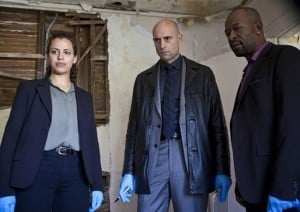 As someone who lives in Michigan, I think my favorite thing about Low Winter Sun is all the shout outs to the different cities located in Michigan.  In the latest episode, “Cake on the Way,” the cities of Flint, Hamtramck, Jackson, and Kalamazoo were all discussed.  Even the street name Mack, which is the road I take whenever I head to a Tigers’ game was mentioned.  Though I might have second thoughts on using this way since, according to the show, there is an abundance of drug activity on it.

The saga over the McCann murder case continues.  Frank and Geddes, along with Khalil, snoop around the dilapidated house that Billy was shot in earlier this season.  While rummaging through the place, they find a sink.  The two determine this is the perfect way to pin the murder of McCann on someone else and assert this is where he was drowned.

Later that evening, Geddes arrives at Frank’s house.  It takes them all night to concoct a story that proves McCann was in the drug house and wound up dead.  They take that story to the mayor’s office, which had been requesting the case be solved as soon as possible.  Everyone seems to believe the story that McCann was trying to keep the drugs for himself, was found out for being a cop, and then was murdered.  The man who killed McCann, then shot Billy and took all the drugs and vanished.

Khalil is the only person who isn’t buying the story.  She keeps asking questions and is clearly annoying both Frank and Geddes.  If she keeps this up, her fate might end up like McCann’s.  Frank and Geddes next step in this process should be to preoccupy Khalil with a different crime to investigate.  That way she will be too concerned with that and not able to figure out Frank and Geddes murdered McCann.

The fun and games at the Blind Pig turned into pain in sorrow after one of Damon’s cronies, Michael, is shot.  If you thought Damon was a horrible person before you watched this episode, you will think he is even worse now.  While taking Michael to the hospital, Damon decides to stop the car and let Michael bleed out.  Damon was fearful he would get into trouble by bringing a man who had been shot to the hospital.  In order to save himself from going to prison, he let his friend die.  Maya didn’t look too pleased with the decision, but kept her mouth shut.

I am trying really hard to fall in love with this show.  Instead, I am scratching my head wondering what is happening.  After speaking with some other avid watchers and reading reviews of the show, I am not alone.  One key problem is the excessive number of characters and plot lines on the show. With the death of Michael, that is one less character we will all have to remember.