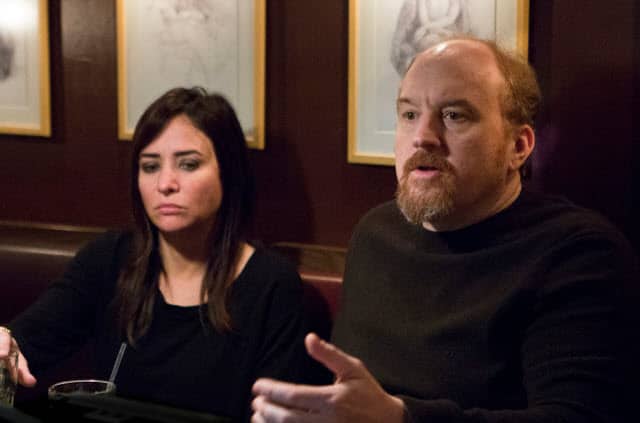 Despite this season of Louie being much more serialized than previous seasons, the decision to break-up the “Pamela” story with last week’s utterly fantastic “In the Woods” feels somewhat arbitrary. The distance between the awkward, troubling events of “Pamela 1” might be enough to justify a gap if just for the viewer’s sake, but Louie has never been afraid to ask its viewers to deal with awkward and troubling things, so that’s not exactly the most convincing of arguments. And that’s all the criticism I have of these last two episodes.

Because the rest of the “Pamela” story is everything Louie ought to be. Individually, it might not stack up to “In the Woods,” but its place at the end of season four is perfect. For a series that often finds beauty in melancholy or honesty in pessimism, “Pamela” is such a relief and breath of fresh air because of how hopeful it is for this series. If Louie ever wins or succeeds, it is tempered by something else. “Pamela,” however, gives him and the series a chance to be genuinely happy and optimistic. That comes at the cost of change, but that also means that the fictional Louie learns that change is necessary when you’re trying to live as two people instead of just one. It doesn’t necessarily have to mean compromise, but being accommodating and understanding is important. Pamela isn’t the kind of person to talk about her feelings in the same way that Louie is. At first, this repels Louie, because her defense mechanism of shrugging serious things off with jokes and immaturity is something he takes to mean something it’s actually not. She just can’t express the things Louie can in the way he can, and there’s ultimately nothing wrong with that.

More importantly than that, to me, is how Louie learns to let go of some of his self-centeredness and insecurities because of Pam’s presence in his life. It rings so true based on what I know of performers that Louie would be this upset by Pam not laughing during his stand-up set. That is something easy to hone in on and use as something indicative of the entire evening–that she doesn’t find him funny, bringing into question his ability to do comedy. Add to that Marc Maron showing up, mentioning his show and chastising Louie for being a terrible friend, and all of the sudden everything about Louie’s life is crashing down. Louie doesn’t stress out about what he’s done or not done to Marc. He shifts the focus on himself, stressing about the fact that someone considers him such a bad friend. Again, this calls into question one of his qualities and forces him to think too carefully about it. Pam, though, swoops right in afterwards as a huge ally for him by telling Louie that he is not special. No one is special. What success often comes down to is luck and working hard. While not directly addressing some of his concerns, this puts things into perspective and allows him to see that the world isn’t so small that it makes decisions based around Louie. It is entirely indifferent. That’s a very Pamela way of helping Louie deal with his issues, but it’s also a reason the two are so good for each other.

That weird, cohesive relationship is illustrated with such tenderness in moments you would not expect. Pam tells Louie’s daughters that their father is a monster and someone would have to be crazy to be his girlfriend. She shutters in fake horror when he takes his shirt off for the first time. Their way of making up initially is through photo messages–a method to bridge the delicate gap that is between them even while they’re in the same room. Even now, I only vaguely remember some of the Pam-centric episodes of Louie prior to this season, but in the space of these last two weeks, the series has shown how these two characters are so important for each other in ways that other people (Janet, Amia, Pam’s ex) could never be. It’s touching to see and, again, allows Louie a more comforting tone and note for the season to end on.

And what a season it has been. I can certainly understand why some viewers might not warm to it for various reasons (I’ve loved it, but I still begrudge the absence of the theme song very, very heavily). This is a Louie that might be the equivalent of a short story writer deciding to use a continuing theme or set of characters throughout a collection. It’s still in its natural vignette form, but it’s closer to a novel-like narrative than ever before. That shouldn’t exactly hurt it in any way; it’s just different. For my money, it’s also not quite as good as last season, which was downright legendary between the “Late Show” arc, the “Miami” episode, the Melissa Leo episode and the “Daddy’s Girlfriend” two-parter with Parker Posey (and then the conclusion to her character’s arc in the finale). Still, this season has had some of the best television all year, the highlights of which for me were “So Did the Fat Lady,” “In the Woods” and this “Pamela” finale. Louie continues to grow rather than settling on what it’s already good at all while challenging the viewer to think and feel difficult things. I’m sure some people can get a kick out of watching the show just as a comedy, but there is so much richness in any episode of Louie that that feels like the wrong way to approach it. There are only a handful of other TV series (Hannibal and Rectify among them) that actively create art on the television screen. For that reason, I can stomach having to wait an extra year to see a new season of Louie. But, selfishly, I’d prefer not to again.