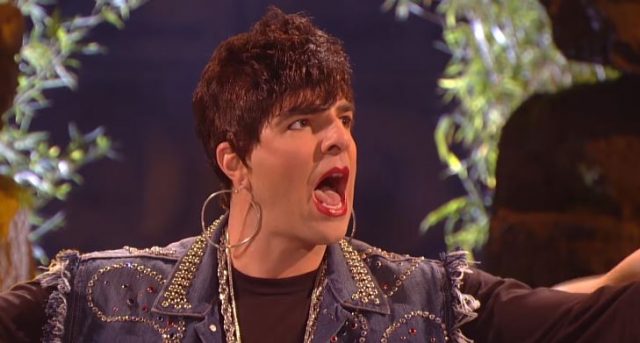 Zachary Quinto and Zoe Saldana may play a strong, committed couple in the Star Trek films, but they won’t be channeling Spock and Uhura in this week’s installment of Lip Sync Battle. In this special hour-long episode, the Star Trek Beyond co-stars will face off against each other, and thanks to a sneak peek clip, we know that Quinto will be getting a little “freaky” during one of his performances.

In the video below, Zachary Quinto transforms into Missy Elliott as he lip syncs to her famous song “Get Ur Freak On.” Not only does the actor wear the same clothes as Elliott did in her music video, but he also dons a wig, giving him the same hair that she had during that time, and even mimics some of her dance moves from the video as well.

And while this sneak peek doesn’t show us Zoe Saldana performing, a brief look at her watching Quinto’s performance may clue us in on at least one of the songs she’ll be taking on. It’s a quick shot, and I could be wrong, but that very much looks like TLC sitting next to Saldana when the camera cuts over to her. Plus, it appears that the Star Trek actress and the members of the famous group are wearing the same outfits that they had on in the original music video for “No Scrubs.”

Lip Sync Battle is hosted by LL Cool J and Chrissy Tiegen and typically airs Thursdays at 10 p.m. on Spike. However, this week’s special episode featuring Zachary Quinto and Zoe Saldana will air from 8 p.m. to 9 p.m. on Thursday, ahead of the Guys’ Choice Awards. Check out the clip of Quinto performing “Get Ur Freak On” below: