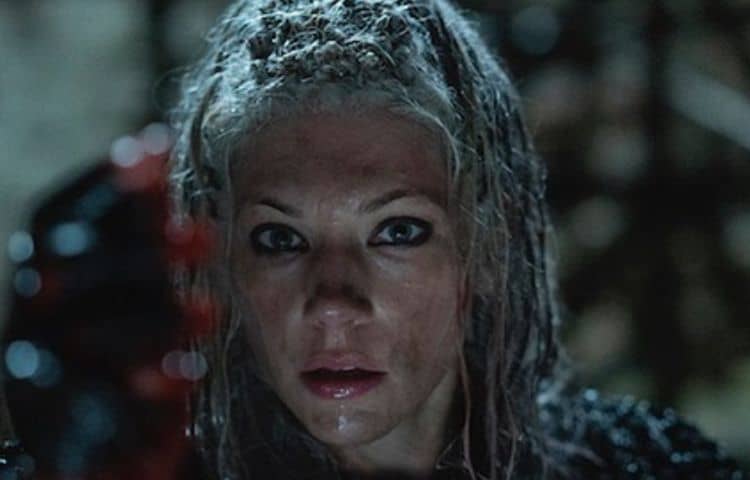 Katheryn Winnick is an actress who became very well-known for her role as Lagertha on the popular History Channel series “Vikings.” In the series, she was the first wife of the Norse leader Ragnar, played by Travis Fimmel. Winnick is an interesting person in real life, and in researching her career and personal history we learned some great facts about her that are worth sharing. To help you become better acquainted with the actress, here are 10 things that you didn’t know about Katheryn Winnick.

Katheryn Winnick was born on December 17, 1977. She recently turned 42 years old. She is a native of Canada, born in Etobicoke, Ontario. Her mother and father are of Ukrainian descent. She didn’t learn to speak English until she was 8 years old. The family spoke Ukrainian as their first language. The name that she was given by her parents at birth is Katerena Anna Vinitska. She adopted the name Katheryn Winnick as her professional stage name.

When Katheryn was just seven years old she began training in martial arts. By the time that she reached age 13, she had already earned her first black belt. She continued with her training and when she was 21 years old she opened up three Taekwondo schools and taught self-defense courses for actors. It’s not surprising that she became an actress herself.

Even though Katheryn Winnick had founded three Taekwondo schools by the age of 21, she was working on her academic degree. She attended classes at York University in Toronto. She completed her degree in kinesiology at the institution. Many of her fans are not aware that she is an expert in the area which complements her knowledge and understanding of martial arts and the human body. She is a skilled teacher who has become an expert on several topics.

4. Katheryn launched her acting career in 1999

Winnick has been a professional actress for twenty years. Throughout the past two decades, she has appeared in several films and television shows including “Stand Up Guys,” “Failure to Launch,” “Killers,” “Love & Other Drugs,” “Vikings,” and more on the film end of the spectrum. She also appeared as a guest star in “Law & Order, “CIS,” “Criminal Minds,” “Kikita,” “Person of Interest,” and others.

5. Winnick is also a director and producer

In addition to being an actress, Katheryn has also tried her hand at directing and producing. She began her directing career in 2019 in the Legacy episode of the television series “Wu Assassins.” She also directed the Valhalla Can Wait episode of “Vikings” most recently in 2020. This is something that is brand new for her. She has produced several episodes of “Wu Assasins.” She is branching out and diversifying her talents in the entertainment business.

6. Winnick is an award-winning actress

Thanks to her riveting performance as Lagertha, Winnick has received a great deal of positive attention as an actress. She was named the Best Actress in a Drama Series for 2018 by the Women’s Image Network. She also received a nomination for a Critic’s Choice Award for Best Supporting Actress in a Drama Series, a Golden Maple Award nomination, a nomination for a Canadian Screen Award, and she won the Serendipity Film’s Award of Excellence at the Banff World Media Festival.

7. She has appeared with famous actors

Winnick appeared in ‘The Dark Towner with Idris Elba and Matthew McConaughey in 2017. She also co-starred with other big-name actors including Al Pacino, Alan Arkin, Christopher Walken in “Stand Up Guys.” She starred with Ashton Kutcher, Jake Gyllenhaal, Paul Giamatti, and many others.

8. She is a powerful influencer

Katheryn Winnick also represents a luxury Swiss watch brand. She was named the ambassador of Raymond Weil. She is the model for their Shine Collection since 2016. She is a powerful influencer who endorses the watch brand, which also provides her with an additional income stream for lending her name to the popular luxury watch brand. The line that she represents is feminine and delicate which is a side that she definitely possesses, but she also has remarkable strength, toughness, and a high level of capability when it comes to self-defense and athleticism. Her role as Lagertha seems to be a good fit with aspects of Winnick’s real-life situation.

9. She keeps her personal life private

Winnick has an Instagram account and she posts pictures on it, but she doesn’t give away a lot of information. Those who have attempted to find out about her love life have been largely unsuccessful. There have been rumors circulating about her dating life with former co-star Travis Fimmel, as well as with American businessman Nick Loeb. These have not been substantiated by her so it’s tough to say what is merely speculation and what the real facts are. As far as anyone can tell, Katheryn is not married and she does not have any children. She has not disclosed any information about her personal life so we assume that she is still single.

There have been no concrete disclosures about Katheryn Winnick’s salary so we’re not sure how much she has been paid in the past. She did establish three of her own businesses, however. She represents a major luxury watch brand and she is a very successful actress and martial arts, instructor. While some have estimated her net worth to be in the one to two million range, the most recent estimate of her personal wealth is placed at $5 million. Her fortune has been made through her acting career, her job as a major brand influencer, and from her Taekwondo businesses. She is a self-made woman who has achieved a remarkable degree of success in her career.