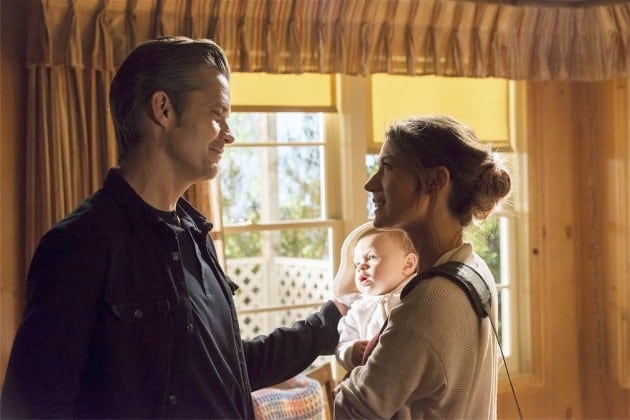 So much of what works well in Justified is due to a lack of honesty between its characters. From double-crosses to secret schemes to even Raylan and his foes saying what they mean without really saying it, this series is full of people withholding the truth from each other one way or another. And maybe it’s partly because we’ve become so accustomed to that routine that tonight’s hour of Justified, “The Hunt,” was yet another standout episode in what has been a terrific final season so far, as so much of this installment came down to two conversations where couples were brutally honest with each other.

The exchanges near the end of the episode between Raylan and Winona and Boyd and Ava couldn’t appear more different on the surface. The first seems to simply be a confession of love and desire, Winona acknowledging to Raylan that not only does she want him in Willa’s life but that she wants him in her life as well. Meanwhile, the second is a much tenser affair, as Ava reveals the truth to Boyd that she’s been working as Raylan’s CI, a bit of truth that could have easily ended with her getting a bullet in her head.

And yet while the tone of the two conversations is the complete opposite (Raylan and Winona’s is tender and sweet, while Boyd and Ava’s is ugly and raw), they are, in actuality, about the same thing. Both Winona and Boyd are asking their significant others if they love them and if they will be with them. Winona wants Raylan to not only accept the role of father to Willa but of husband to her, to join her in Florida or Kentucky or wherever they go, just as long as they’re together, while Boyd’s main question to Ava isn’t about her deception but about whether she slept with Raylan again, for that would prove that she no longer loved him and that he thus had nothing to live for. They’re both questions of commitment, and as we see, Raylan and Ava respond in the ways that their counterparts were hoping for, even though Ava’s answer, if it had been the wrong one, could have had much deadlier results (more on that in a little bit).

It’s becoming clearer now that this final season of Justified isn’t simply about the two men who used to dig coal digger. While Raylan and Boyd certainly remain at the center of things, with the duo of Markham and Walker looming as threats, we’re being shown that the love that they possess for the women in their lives is what’s most unwavering. It’s not their dedication to their chosen professions or the unique bond that they share together; no when it comes to Raylan Givens and Boyd Crowder, at the end of the day, they both just want to go back to the women they love, and it’s only around them that they can drop the facades they wear throughout everyday life in Harlan and truly be honest with Winona and Ava and, most importantly, themselves.

“The Hunt” reminds us that Raylan and Boyd haven’t simply found themselves on these dangerous paths because they “get off” on what they do, although we do see that not only are both men good at their respective jobs (lawman and criminal) but that they certainly do find some sort of solace in it–otherwise Raylan wouldn’t have gone to the Marshals’ office with Willa. No, what drives these men is not what they can gain for themselves but how they can protect and provide for what they already have. As much as Raylan is trying to go after the criminals in Harlan because that’s just the type of dangerous guy he is, it’s also because he wants to make sure that the world is a safer place for Winona and Willa, that there may be a possibility that they could live here togehter some day; similarly, Boyd wants Markham’s money not so that he can buy himself a first class ticket to a private island but so that he can start a new life with Ava.

With only six episodes remaining in Justified‘s run and Raylan and Boyd on opposing sides of the fight, it’s unlikely that they’ll both find a way to their happy endings. However, even if neither man is able to achieve their goals, at least they were honest about what they wanted–that’s more than what most people can say.

– The acting in this episode was, as it always is in Justified, top-notch, but both Walton Goggins and Joelle Carter truly brought something special to their final scene of the episode. You really believed that, even though neither of them wanted to, Boyd or Ava could have killed the other, and Goggins, especially, sold Boyd’s uncontrollable pain at the thought of Ava being with Raylan, although that could have been more acting on Boyd’s part than something genuine.

– And why am I not sure if Boyd’s emotions there were entirely genuine or not? Well, because as we saw, the gun he had wasn’t loaded, meaning that Ava couldn’t have killed him like he begged her to. While he was certainly hurt, their exchange was more about how much he could trust her–it was all a test.

– I praised the acting of both Goggins and Carter, but I also need to give credit to Timothy Olyphant, who expressed so much emotion tonight with just a glance. When Winona describes how she understands how he’ll never be able to leave his life as a Marshal behind, he gives this look of longing, for just a moment, that says just how much Raylan wants that life with her and Willa. It’s a beautiful piece of acting.

– God, the intensity of each Boyd and Ava scene tonight was just spectacular, wasn’t it?

– Oh, right, some other stuff happened tonight: Art pseudo-interrogates Markham about Grady Hale’s suicide/murder when he’s brought into the Marshals’ office after Walker goes on the run. Their exchange is classic Justified back-and-forth, as they talk around the subject, as much as they can. It’s been good to see Art getting back into the thick of things in these past two episodes, and I’m never going to complain about Nick Searcy and Sam Elliott sharing the screen together.

– Also in this episode: Walker goes on the run, and even though it doesn’t connect as well with the Raylan/Winona and Boyd/Ava stuff, it’s a lot of fun, especially the brutal scene of him taking the bullet out of his arm with his own knife and his intimidating of the frat bros. We end with him having called an ambulance, killing both paramedics and taking at least the medical kit inside (if not the whole vehicle).

– I’m really getting worried about Raylan. His final exchange with Winona (“See you soon?” “Yes, you will”) felt more like a goodbye than anything else. Maybe the Justified writers wanted to give Raylan a sweet taste of the family life that he will, unfortunately, never have?

– It’s amazing that Boyd found out the truth about Ava this quickly, as we’re really only about halfway through Season 6. I thought for sure that it wouldn’t be revealed until one of the final three or four episodes of the series.

– With only six episodes left, it’s starting to dawn on me that Justified is ending, and even though it’s good to see the show end with as spectacular of a season as this one is shaping up to be, I’m not ready to let it go just yet.