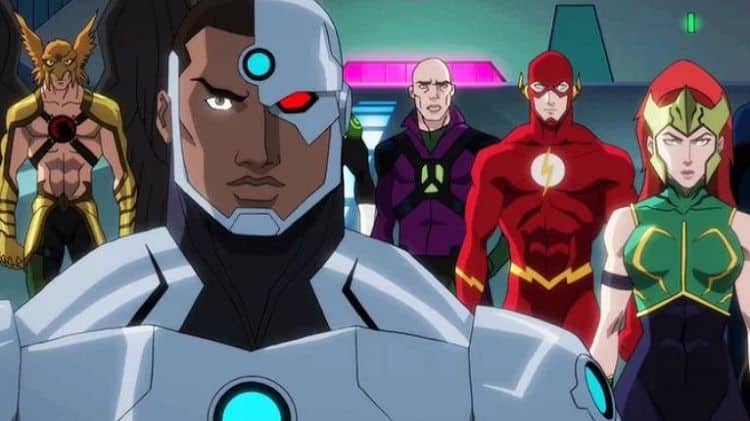 One has to wonder just how far the Justice League needs to be pushed until they stop showing any restraint and go for broke. Of course the Justice League Dark has a ring to it that suggests that they won’t be playing nice since Darkseid isn’t about to hold anything back unless there’s a strategic reason for doing so. If there’s one thing that a lot of fans of DC and Marvel have noted over the years it’s that a lot of the heroes in DC don’t always take a hard line against the villains unless it’s absolutely necessary. Over the years that attitude has definitely changed, but there are times when the heroes of DC still don’t go nearly as dark as those of Marvel in certain ways. In this movie however there are definitely bound to be moments when the animated feature might actually delve into subject matter that gets profoundly violent and kind of disturbing if only because when fighting an opponent that’s bent on little more than destruction and death there’s no more need to pull the punches or halt at the destruction of such an enemy. It’s easy to argue that Marvel has done this in their live action movies and has kind of taken the edge off of their heroes thanks to being owned by Disney, but Endgame and even Infinity War did get pretty violent, as did a couple of the standalone movies.

When one thinks about the propensity for violence that some of the Justice League members have though and the kind of damage they could do with the powers they possess it’s easy to think that they would wipe out entire cities without breaking a sweat, so fighting their enemies in a crowded location is likely why some of them pull their punches every now and then since mass destruction isn’t what they’re out for. Out of all the DC enemies one that’s been a rather big thorn in the side of a lot of heroes has been Darkseid, and a big reason is that he’s powerful enough that he can usually afford to be pretty arrogant and full of himself without calling it bragging or showing off. This is the kind of enemy that every Justice League member is right to be nervous about since his power set is insane and anyone that can give Superman a loss is easily one of the strongest characters in the universe. Plus, being able to take on the Justice League and keep them well occupied and even on their heels a time or two in the past is enough to state that this villain is one of those that exists on the same level as some of the worst cosmic threats in the entire DC universe. There are plenty that would surpass or at least challenge him, as Edward Cambro of Screenrant has a list of baddies that are worse in some ways than Darkseid. But when it comes to sheer terror and power that can be inflicted for reasons of his own, Darkseid is obviously hard to match.

So far this movie looks as though it might be one of those that will continue the popularity of the animated DC features since there’s plenty to like about it and a lot to comment on as one goes through the trailer. The fact that more and more heroes have poured in to fill the ranks and help out is indicative of how hard this battle is going to be, and how fully Darkseid will be bringing the pain. Despite not being a devout DC fan I can still remember the days when Darkseid was the kind of villain one didn’t see a lot of the time since he’s so over-powered that putting him up against anyone but the heavy hitters of the DC universe is kind of unfair and bound to test the limits of a writer’s ability to come up with some way to allow the heroes to live while still doing some sort of damage or causing some havoc for a bad guy like Darkseid. Many of the heroes on the Justice League would fall in a battle against this villain if it were one on one, and only a few of them would have anything resembling a chance. This is definitely one that Batman could prepare for as much as he wanted but wouldn’t be able to find a way to come out on top, as Darkseid is just too powerful.

All in all it does look entertaining and as though it might test the League in a big way since the enemy is someone that is absolutely relentless in his goal. But one way or another it’s a certainty that the JL will win out since that’s usually the way things happen.