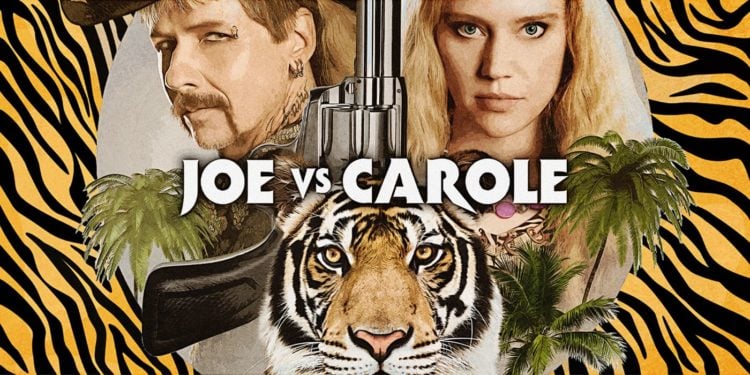 Just when one thinks that they can move on from a story that was, quite honestly, more than a little ridiculous, they find that the tale was bound to give birth to a seriously flawed (for entertainment purposes) limited series that makes use of several great actors for several less than desirable roles. The whole fiasco that was presented during The Tiger King documentary on Netflix hasn’t quite run out of gas, but it did apparently switch streaming sites since Joe vs. Carole featured on Peacock this time. Maybe Netflix had had enough and was ready to move on from the real-life schlock that had been dominating the news cycle for so long. To be fair, the people that inspired this series and were featured in the documentary are still being adored or berated by the people that took the time to invest even a slight bit of emotional content into this story. Joe and Carole became a documentary, then a meme-fest, and then a punchline which is still funny to a lot of people. The funniest thing is that people are still willing to laugh.

Most people might avoid this series simply because they fail to see the reason to revisit this tale after what was featured on Netflix and the news that was spread following Joe’s arrest. Carole’s brief foray into the world of Dancing With The Stars was even worse if that’s even possible since the desire she might have for people to take her seriously kind of evaporated when she made her way onto the show. And yet, the series does one thing right, apart from making it possible for people to laugh. Before each episode even starts the disclaimer that the story is based on reality but has been altered for entertainment is smart since it makes the point that yes, this did really happen, but not exactly in the manner that people are about to watch. One has to wonder how many people are still going to be up in arms about how the series plays out.

For the most part, it does stick to the pertinent moments in the feud between Joe and Carole, but despite making Joe out to be the type of person that is more self-involved than Narcissus, it also tries to pain Carole in a light that places plenty of doubt when it comes to thinking that she might have any ill intent. There are several moments in which Carole appears as a less than balanced individual, but for much of the series, Carole is painted in a light that makes her look more like a victim than a strong, confident woman that was ready to put the screws to anyone that harmed an animal. There are moments when Joe appears to be a little more of a sympathetic character, which is interesting since the series does humanize both people in a few ways. But seriously, the over the top performances given are definitely humorous since no matter how serious the matter might be and no matter how much Carole and Joe might have suffered in their lives, this series made light of it in a way that might not be obvious but is still noticeable if one is paying attention.

Thankfully, the dark humor is intentional, but no one should be surprised that when Carole Baskin heard of this production that she reached out and insisted that no real animals be used in the making of the series. To be fair, that doesn’t sound like an unrealistic request, but somehow it still sounds like a lot of nagging by a woman that still feels incredibly suspect no matter how she professes to do so much good for animals. The fact is that the series uses all CGI animals, which is pretty obvious from the start. Anyone thinking that the animals in this series look realistic needs to have their eyes checked since this is some of the dodgiest CGI that’s been used in a while. The effect that the series is supposed to inspire in people falls rather flat when this is established. In all honesty, this much CGI is likely difficult to keep up with for a streaming series, but at the same time, it still feels as though it could have been executed in a manner that might have been far more believable.

But with that in mind, this series was something that would have been comical even if it hadn’t meant to be since the way the characters are represented makes it clear that one can either laugh or simply cringe since seriously, it’s that awkward. Trying to figure out what really happened and what was pure entertainment isn’t bound to be that hard, but one has to wonder if a person would want to cross-reference The Tiger King with this series. Seriously, just be entertained.