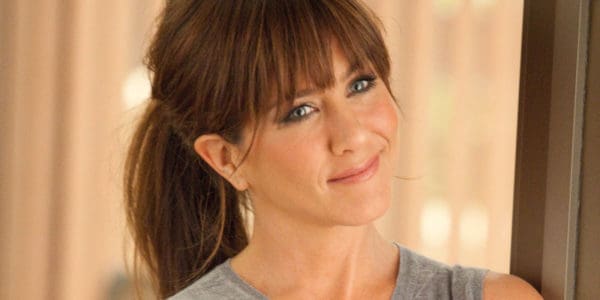 You already know that she’s responsible for the ‘Rachel cut’, the popular haircut that was seen on thousands of women, if not more, when Friends was still a popular show, but Jennifer Aniston has a lot more going for her than that and has managed a career that has put her in the midst of legends and newcomers alike. She’s been around a lot longer than some folks realize and looks great for her age, but she’s also gained a lot of wisdom on her way up. Obviously she’s loved and lost throughout her career and she’s done the best she can to maintain relationships but has kind of faltered now and again only to come back stronger, wiser, and more capable than before. Jennifer Aniston hasn’t always been the media darling but she’s certainly been someone that people look up to and admire for much of her career.

10. Anyone remember the show Herman’s Head? Aniston had a recurring role in it.

Herman’s head was about a guy named Herman, obviously, and the explanation of what went on in his head on a daily basis. It was kind of like a live action Inside Out but with very different roles and inside the head of an adult male, not a young girl.

9. Telly Savalas was her godfather.

Remember Kojak? If you do then you’ll know who I’m talking about, if not then you might have born within the last 20 years since Kojak was at one time a very popular show. The main character was her godfather in life.

8. She didn’t even invite her mother her wedding, as the two had been at odds with one another for a while.

That seems rather harsh to not even invite your own mother to your wedding but on the other side of things if you aren’t getting along with someone you probably don’t want them attending what’s supposed to be one of the happiest moments of your life.

7. A magazine actually took topless photos of her in her own backyard once.

6. At one time she offered to be Matthew Perry’s trainer to help him lose weight.

She cared a lot about her costar and wanted to see him lose the weight and get healthy again, but if the truth is going to be told Matthew Perry had a lot of other issues while on the set of Friends since he can’t seem to remember a lot of it due to being intoxicated at the time.

5. She’s been known for taking on multiple projects at a time.

Jennifer is a very busy woman sometimes as she’s been working on two movies and a TV show appearance in the past all in the same year. You might think that would be enough to make anyone a nervous wreck but she’s managed to keep it together.

4. Take a look and you might notice that she plays a waitress in more than a few movies.

Whether it’s a favored role or something that directors just seem to find she’s good at portraying is hard to say but she’s been a waitress in a couple of different movies such as Office Space and Along Came Polly.

3. Jennifer worked a few regular jobs before catching her big break in the industry.

One thing that a lot of people that are envious of celebrities forget is that a lot of them worked regular jobs in their youth and weren’t born with a silver spoon in their mouth. No matter how they act now they came from very humble beginnings in which they had to work for their pay just as much as anyone.

2. If you can recall, she was in the movie Leprechaun, the original movie.

Now that there’s a new Leprechaun coming out it seems pertinent to remind people that she was in the first film that came out featuring the little green devil. It was one of the first real roles that she’d taken on film.

1. She and her ex Brad Pitt actually met on a blind date.

To think of it in the terms that fans might understand you might think it was a romantic, fairy tale meeting that was simply meant to be. In truth it was a blind date and it was very likely that they were both kind of nervous to see how it might turn out.

Throughout everything Jennifer has stayed classy and has demonstrated why she’s one of the most sought-after people in Hollywood.