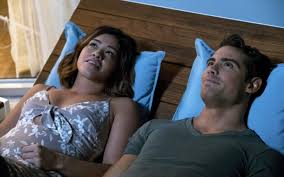 My, my, my, how the tables have turned on Jane the Virgin! How could Jane have ever predicted that the words she uttered to boys in the past would come back to haunt her? It seems that many words of old have come back to haunt Jane and her family, in good and bad ways. The thing about loving someone is that you know when the words are right. Whether you’re a best friend, a sibling, or someone head over heels, the right person will know the right words to say. Jane heard just what she needed to hear from someone new and someone familiar to her life. Unfortunately, Jane did have to take a moment to find the right words to explain to her son why there is so much hate in the world. It’s hard for an adult to explain the inexplicable to a child.

Before we get started on all of the sisterly bonding and growing relationships, I’d like to take a moment to personally thank the writers for their fantastic work writing in the horrific racism going on in our society today (and if you disagree with me, you can just click onto another review). I’ve greatly enjoyed watching Alba enjoy her life as a U.S. citizen. She has a job that she’s proud of, a new man in her life, and all the love in the world to be grateful for. Yet, it’s still shocking for Alba to hear racism spoken so blatantly in her place of business (which is co-owned by two immigrants, thank you very much). It’s hard for adults and kids alike to understand how people could be so hateful. Jane and Rafael have a hard time explaining why it exists. It was absolutely ridiculous that he should be afraid that his great-grandma would be taken away from him! Alba continues to make herself and her audience proud by vowing to march for those who can’t. Not to mention she kicks Xiomara’s rear into gear with Rogelio, producing their most beautiful proposal to date!

We’d do anything for the people we love, especially when we do it for their own good. Sisters in particular will do anything for each other, but would Anezka or Petra kill for each other? It seems unlikely given how much Petra hated her sister, but that might also be the reason Scott ended up dead. It turns out Petra pulled a switch with her sister a few years back to get Anezka and Scott out of her life. Petra was also trying to protect Rafael by concealing the truth because he was on probation. Once Rafael gets involved in helping Petra, he realizes that he really does love Petra. He’ll go to the ends of the Earth for her, which he better figure out if Chuck does turn out to be Scott’s killer.

Jane’s relationships can be on more solid ground if she gives them a chance. Fabian definitely has some fine physical points. Okay, his finer points are more than fine. Jane avoids thinking about them by focusing on Lina’s return. It’s definitely better than Jane’s ‘Dining in the Dark’ avoidance technique. It’s truly heartbreaking when best friends lose touch. Two years ago Lina moved away, and their lives just went in different directions. Fabian does his best to try to fix the situation, which forces an honest, instead of awkwardly polite conversation. Those are the best kinds because true best friends don’t need to be polite, they just need to be honest. Neither one of them did anything wrong. It’s just that Lina couldn’t relate to Jane’s grief when she was falling in love. It only takes one honest conversation to heal the rift, which is exactly what it takes for Jane to see Fabian as more than just a fling. I have hope for Jane’s romantic future.

Should Jane the Virgin put Alba in a greater resistance role?

Jane the Virgin heals old rifts and tells the beginnings of a powerful story of resistance.