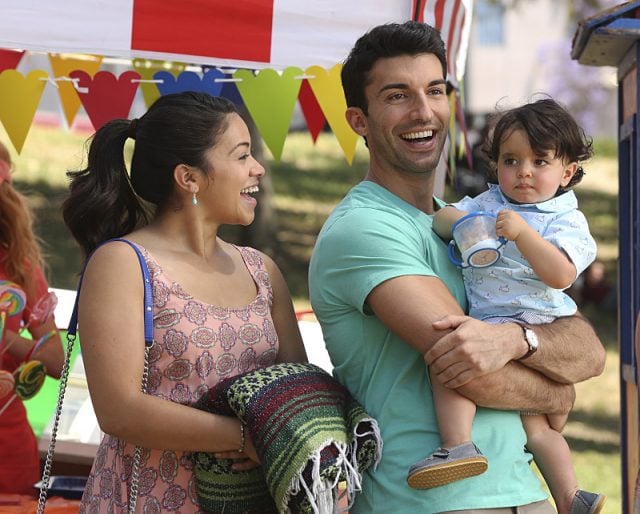 It’s the penultimate episode for season two of Jane the Virgin! What better way to follow up Jane’s first Mother’s Day than with Mateo’s first birthday? At least that’s what Jane thinks. But with a birthday immediately followed up by a wedding in such a short amount of time, chaos is sure to ensue.

With Mateo’s birthday party a few days away, and the wedding just two weeks away, Jane has never been more organized (considering this is the same girl who had multiple baby shower lists pre-shower, that’s saying something). The only person even more on top of the wedding plans than Jane is Rogelio. He has everything under control until  his television crew decides to go on strike the day before the wedding. This puts things in a scramble to move the wedding up a week. Jane’s scrambling means she neglects plans for Mateo’s party, thus losing the entertainment for the event. So now both celebrations are in jeopardy.

In a last ditch effort to save Jane’s dream wedding, Rogelio agrees to work as a crew member for a week. It’s probably the hardest Rogelio has ever worked in his entire life. Rogelio does surprisingly fantastic, until he’s asked to change a lightbulb rather high in the ceiling. Did we mention Rogelio’s afraid of heights? Normally Jane would cut her father some slack, but his success determines if Michael’s mom can attend the wedding. Rogelio succeeds, but the network executives decide to fire the crew before they can strike. So Jane’s wedding is still moved up so that the crew can keep their jobs.

The good news is that Jane’s writing is taking off. Not only does Jane’s supervisor love her thesis, Alba gets her a meeting with an actual publishing house.  The problem is that there is a difference between thesis ready work, and publishing ready work. Nevertheless Beverly the publisher (guest star Debbie Allen) approaches Jane about her work. Jane asks Michael for his opinion, and he actually agrees that Jane needs some editing time.

Things are looking so well that Jane goes to Petra for peace. They are family after all. Petra always feels that she’s in competition with Jane, and is she really wrong? Both Jane and Petra have conflicting views on how Rafael should handle the Derek situation. Rafael tries to do things by the letter of the law according to what Jane wants, but Petra knows there is still a chance Rafael could go to prison her way. So they set up a fake FBI sting to trick Derek into confessing. It backfires, and Rafael is forced to sign over the other hotel to his backstabbing brother. This only adds more fuel to the Petra/Jane rivalry.

Based off of Michael’s (correct) hunch that Derek is working for his mother, the crime lord Mutter, he goes to his old partner Susanna for help. Eventually they figure out that there must be an undergroun connection between the two hotels where Mutter is stashing her money. They are shocked to find Mutter actually there at the site, with both her son and the cash long gone. If you think that Derek is the biggest backstabbing sibling, you may want to take a closer look at Anezka, who as it turns out has been scheming with her mother.

All of this pales in comparison to the real star of the show-Mateo! Unfortunately the little one spends his first birthday in a hospital after he spikes a horrible fever. The crisis makes Rafael feel closer to Jane than he has in months, but it’s clear she still wants Michael. We’ll see next week if Rafael succeeds in his one last ditch effort to win back the girl of his dreams.

Good or Bad loose ends going into the finale?

In the penultimate episode of Jane the Virgin‘s season 2, Mateo’s first birthday does not go off without a hitch.