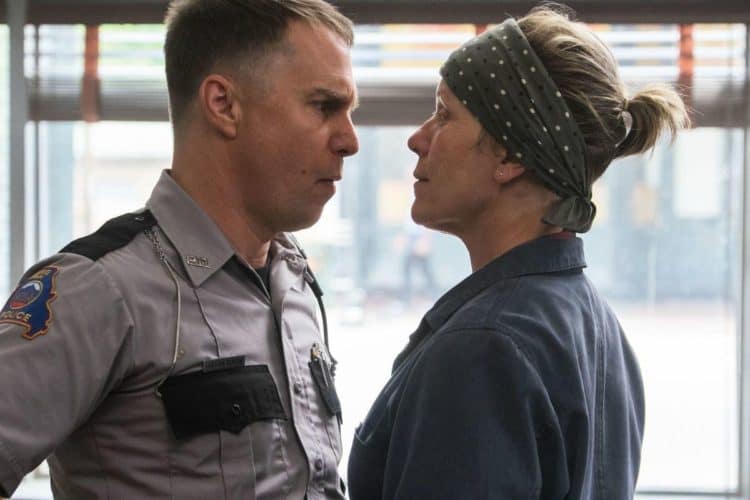 Three Billboards in Ebbing, Missouri is a polarizing film. We have a protagonist who’s kicking kids in the nuts and setting police stations on fire. The police chief is dealing with his own set of problems involving his battle with cancer. And Officer Dixon, the immature mama’s boy who has a short temper. To rewind, the Martin McDonagh vehicle is about Mildred Hayes’s quest to finally get some answers about the murder of her daughter, and she writes a controversial message aimed at William Willoughby. The film follows the ups and downs of these characters as they navigate through life following the surprising message Mildred leaves on three billboards on a nearly abandoned road. To be clear, Three Billboards in Ebbing, Missouri is a dark comedy as much as it is a drama, so the over-the-top characters fit into the world that McDonagh has crafted. This is a Mildred Hayes story first and foremost, so everyone else in the feature is just living in the scorn mother’s world. I highlight this fact because we really don’t get into the root of Dixon’s issues.

We have an idea why he’s racist. We don’t know why he’s an a**hole though. Hell, after he threw Red out the window he reveals his hate for white folks too! To play devil’s advocate, we don’t actually see Dixon commit any crimes against any black people. It’s clear that he’s a racist and the film makes several references regarding his behavior towards blacks, but he doesn’t go far enough in terms of his racism. Now, the ending of Three Billboards in Ebbing, Missouri actually sees the former Officer join Mildred on her quest to find the man responsible for her daughter’s murder. Upon release, there was some blowback to Dixon’s character as some fans and critics didn’t believe that he deserved the nice ending that he got because he’s classified as a racist. Dixon isn’t, particularly a good person for the early portion of the film, but McDonagh makes sure to walk a tight balance in the way he penned Sam Rockwell’s character. As I previously stated, Dixon doesn’t commit any type of hate crimes against black people. Sure, his interaction with the black guy at the billboard showcases his nature, as well as the new police chief following Willoughby’s death, but his actions and words a fairly tame. The worse crime he commits is unjustly beating the crap out of Red, though it wasn’t without purpose. In Dixon’s mind, Willoughby killed himself because of the guilt over not being able to solve Angela Hayes’s case, which was strung up again because Red allowed Mildred to plaster that message onto the billboard. Justice is a bit served when the new police chief fires Dixon after seeing the heinous crime, and Three Billboards in Ebbing, Missouri makes a solid effort in trying to redeem his character.

Later on, it’s implied that Dixon got his racism from his mother, and he eventually comes to a realization after he’s fired. He goes out of his way to actually trying to solve the Angela Hayes case, even though he’s set on fire and beaten to a bloody pulp. Dixon’s character does develop once he gets his comeuppance following the assault on Red. He even apologizes to the young man when he sees him at the hospital. Even then, he’s still a well-rounded individual thanks to his relationship with Willoughby. We actually see that he’s a decent, but heavily misguided human being throughout their scenes, thus the reasoning that his development was so smooth. He comes across as a genuine three-dimensional human being that can laugh and cry like the rest of the world. If you pay attention to the final scene with Abercrombie, there’s not an ounce of racism coming from Dixon at all. He doesn’t seem disgusted at the Chief nor is there any hatred or rage towards him. He turns in his badge because he didn’t buy that the guy who beat him up at the bar was as innocent as the Chief claims him to be. Officer Dixon is actually one the best supporting characters in recent memory. He never overshadows Mildred’s story, and his development is well earned. Sam Rockwell deserves that supporting Oscar award because he was tremendous throughout Three Billboards. By no means is the 2017 film perfect, but it’s truly a great movie that manages to tug on your heart strings and make you burst out in laughter. To Officer Dixon’s credit, he’s one of the main reasons that helps evoke those emotions.