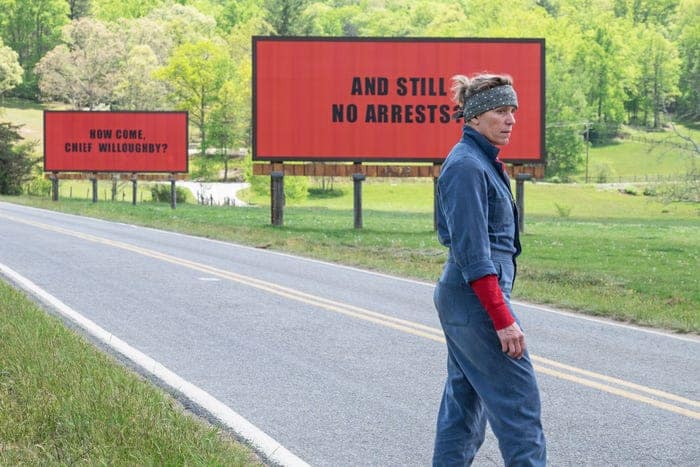 Three Billboards Outside of Ebbing Missouri is one of the more interesting films to come out in 2017. It contains a racist cop, a scorned mother, a suicidal police chief, and an abusive ex-husband. All sounds like a great recipe for a melodrama, right? Wrong! Martin McDonagh crafted this dark comedy and drama feature starring the all-star cast of Frances McDormand, Sam Rockwell, and Woody Harrelson. The film centers around Mildred Hayes, who goes to extremes just to get more attention to her daughter’s murder case; however, the situation gets more complicated when William Willoughby and his second-in-command, Officer Dixon, an immature racist who’s has a penchant for violence, gets involved. The 2017 picture turned out to be a critical darling for McDonagh and Three Billboards earned seven Academy Award nominations.

However, there was a bit of a controversy surrounding the film, namely over the racist cop character that Sam Rockwell plays. Despite the whole arc with Officer Dixon, does the best picture nomination truly deserve its Oscar accolades? With such a crowded year in 2017, how does Three Billboards exactly stand out from the crowd? Let’s dive deeper into this quirky dark comedy feature. First, let’s address the arc of Sam Rockwell’s Officer Dixon. Should Dixon have gotten some type of comeuppance for his behavior throughout Three Billboards? The key thing about this film is that it’s a dark comedy. These types of films tend to have over-the-top characters, and Dixon strongly fits in that category. Don’t get me wrong, there are actually police officers like that out in the real world. Would it have been nice for Dixon to address his racism and grow as a human being? Definitely. In today’s environment, it would’ve been great if McDonagh dug deeper into the psyche of his actions and tackled them head-on.

However, this is Mildred Hayes’ film, not Officer Dixon’s, so I can understand why McDonagh doesn’t fully put his attention on Officer Dixon’s character. Now, Dixon does get his comeuppance in the film. He’s actually fired by the new police chief – who happens to be black. While it’s implied that Dixon has been beating up black folks, we actually never see him do anything so deplorable that his character is irredeemable. Dixon has a good heart, he’s just a bit misguided. In terms of the way he was written in Three Billboards, McDonagh did an excellent job of crafting the character and Sam Rockwell deserved his best supporting acting win. As for the rest of the film, McDonagh managed to brilliantly find a way to balance the dark comedy and drama together effortlessly. This isn’t an easy feat. As previously stated, dark comedy usually has over-the-top characters or unrealistic situations, and with outrageous moments like Mildred kicking three students in the genitals, or setting the police station ablaze, or Officer Dixon throwing Welby out the window, these sequences never throw the film off balance because it fits the world that McDonagh presented to us early in the film.

Not surprisingly, Frances McDormand is fantastic as the lead. It’s amazing that she almost turned down the role as I can’t see any other actress playing Mildred Hayes. McDormand perfectly conveys the boldness and toughness that Hayes displays throughout the film; however, she’s not afraid to showcase her softer side. Hayes talking to the deer is arguably one the best quieter moments of the film, as it’s truly one of the rare moments that Hayes lets her guard down and be vulnerable. Of course, we can’t forget about the sad story of Woody Harrelson’s Chief William Willoughby, who is arguably the heart of the film. While the chief eventually commits suicide in the movie, Harrelson bounces off the multitude of characters pretty well. From being sort of a mentor to Officer Dixon to his compassion for Mildred Hayes’s situation, the veteran actor continues to showcase why he’s one of the best in the business. McDonagh’s confident direction allows the film to maintain its momentum from beginning to end.

Despite the dark subject matter, Three Billboards is a beautiful film to look at and plays into the overall theme of the 2017 feature. Three Billboards could easily go down as one of the best dark comedy and drama films ever made. Based on the review, it’s clear that my stance is that the movie does deserve the accolades it’s received from the Academy award. Sure, Three Billboards is not a perfect movie and I understand the critics levied against the 2017 film; however, the pros vastly outweigh the few cons here.