Home
Movies
Is A 21 Jump Street/Men in Black Crossover Necessary? 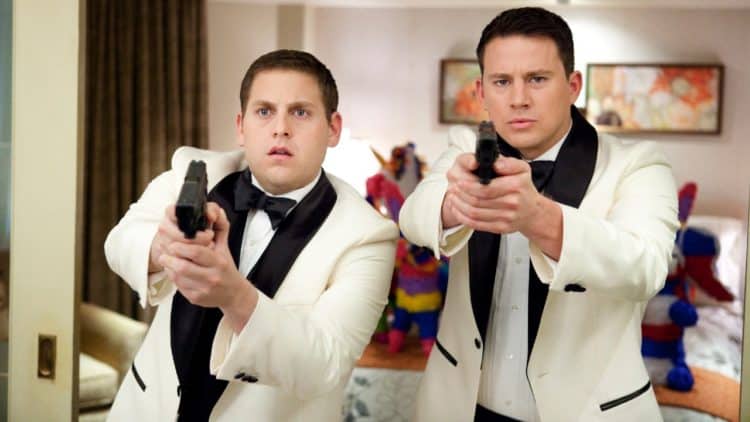 Suddenly, the 21 Jump Street/Men in Black crossover became such a hot topic in media. Following the conclusion of 22 Jump Street in 2014, rumors ran wild over a potential crossover between the two popular franchises. However, it’s been nearly ten years since the last Jump Street movie and the possibility of a crossover had died a while back. However, before it was surprisingly dropped, the film was actually announced back in 2016 with The Muppets director James Bobin attached to the crossover. Last week, Channing Tatum was doing his media rounds for his upcoming film, Dog, and the actor revealed that a full script was made and ready to go. In fact, Tatum stated that everything hinges on Sony greenlighting the project. The problem is that the studio just isn’t interested in going forward with the crossover, “Right now, I don’t know why, they’re just not motivated to do it,” said Tatum during his Collider interview. While the film isn’t dead in the water, given the fact that the company already has released plans for the female spin-off, Jump Street: Now For Her Pleasure, the chances remain incredibly slim. However, the question is, was there ever any need for a 21 Jump Street/Men in Black crossover? Well…maybe.

Here’s the thing, both the 21 Jump Street and Men in Black films are actually great on their own. Obviously, some are better than others (giving Men in Black II a weird side-eye), but the key thing is that these films already had their conclusions. The chemistry between Channing Tatum and Jonah Hill was magic as both men had their characters nailed done to a tee. However, it wasn’t just their amazing chemistry and talents, but the jokes were hilarious more often than not. The same thing can be said about Men in Black. Will Smith’s goofy fish-out-of-water character perfectly blended with Tommy Lee Jones’s straight-man figure. The film had a nice mix of sci-fi, action, and comedy. In truth, the issue isn’t that the franchise is doing a crossover, it’s the fact that it doesn’t make much sense since both films live in different worlds. Men in Black features all types of aliens, high-class sci-fi tech, and disgusting roach/alien things. The world of 21 Jump Street is straight forward, with the oddest thing being Channing Tatum and Jonah Hill trying to pass over as high school students.

Now, to be fair, there’s a way to make both films work. The alien world is Men in Black is mostly secret, so there’s a possible way to fuse the franchises by having Schmidt and Jenko somehow stumbling into the world of Men in Black. The problem isn’t so much that these two franchises won’t mix. Is it easy to screw-up a 21 Jump Street/Men in Black crossover? Definitely, but the underlying reason that these films don’t feel necessary is due to the fact that Jump Street and Men in Black already had their fitting conclusions. Now, Men in Black III’s ending wasn’t exactly a goodbye moment, but the story felt like it brought the arcs between K and J to a close. The third entry was more intimate than the first two, where we learned that K was acting as a surrogate father for J throughout his life. Once J returns back to his timeline, everything goes back to normal, with the only tease of a possible another film subverted when K gives the waitress a tip, thus negating the asteroid destroying the earth. The journey and saga of Will Smith and Tommy Lee Jones’s character felt complete and the ending to their saga was actually perfect.

22 Jump Street was essentially a remake of the first movie, with the roles flipped for Schmidt and Jenko. The story between these two doesn’t require any more questions as their personal journeys had been complete. The sequel even mocked the idea of another film thanks to their hilarious end credit sequences of Jump Street sequels. To be clear, I do understand that the crossover would likely be nothing more than a mindless popcorn affair. I don’t expect it to be some deep and thought-provoking character driven piece. That’s pretty why I’m so indifferent on whether they feel necessary or not. I’m happy with the end result of both franchises and I don’t feel that there’s a need to go back into these worlds. Is there intrigue on the concept of a 21 Jump Street/Men in Black crossover? Without a doubt, and it doesn’t mean I can’t be swayed into gaining interest in the film. However, sometimes franchises need to know when it’s time to end. The Godfather should’ve stopped at Part II. So should’ve Terminator. The Hangover should’ve been one-and-done. Why ruin the nice conclusion of both franchises just for an unnecessary crossover. Obviously, money. It’s possible that I’m being a negative Nancy and the crossover could be an all-time classic. Until the film sees the light of day, I’ll remain happy over the endings of both Men in Black and 21 Jump Street.