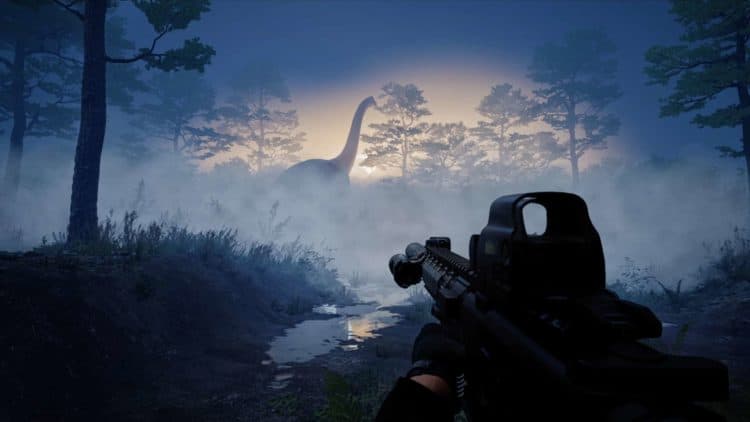 Instinction is following the footsteps of the long-missed Turok: The Dinosaur Hunter series and even ARK: Survival Evolved to some extent. It’s good to see dinosaurs are making a comeback with this next generation of hardware. It is difficult to pinpoint the exact reason why they have been missing within the last several years. The allure of the thunder lizards has always been ingrained into the public’s psyche. Whatever the case, there seem to be more IPs springing up that put these extinct beasts front and center of the action. This sub-genre has always been rich with potential and it looks like Instinction could be the next best thing regarding dinosaur survival-horror.

Developer Hashbane Limited is taking the basic premise of the Jurassic World movies and putting them in the hands of players. This title is going to be a first-person shooter where players take control of the protagonist who is stuck on an island that is infested with man-eating overgrown lizards. Of course, by the documents of sundry paleontologists, there will be all manners of these animals to encounter. There will be herbivores and carnivores alike, all freely roaming the map with their own A.I. and behavior patterns. This game has been quietly in development by the developers over in New Zealand for a little over a year. It appears to be lovingly crafted by talent that is clearly fans of dinosaurs and they want to bring back a long-dormant sub-genre of games.

It is easy to point out the similarities that this game has to other shooters. What the developers are trying to achieve is making a game that has the same vibe as Dino Crisis. The rumblings of a Dino Crisis revival have been around for years to no avail. Therefore, perhaps it’s time for something new. Instinction is fully open to requests on what dinosaurs can be added to the game. The developers are holding no bars on what can be included in this IP, in which an entire roster of dinosaurs will be making an appearance. Everything from the famous to the obscure will be lurking around somewhere in this game. These beasts won’t be mindless killing machines, they will all have distinct personalities. Meat eater or not, some can be friendly. Thus, the plant-eaters can also be foes if players cross them the wrong way. The wilds of this world can be complex and blasting everything in sight isn’t recommended.

Players will need to be smart and tactical with their actions. Avoiding combat to save ammunition is one way to play. Also, manipulating the environment to trick the animals to fight each other is another advantage. There are open possibilities to combat in which players can experiment and try new things, which is somewhat akin to Far Cry. On that note, there will also be robust customizations to the weapons, characters, and even the HUD. The developers feel that it would be best to have the player mold the game to look the way they want. As opposed to spending time and resources programming a rendered layout that some people may find distracting. The developers over at Hashbae seem to be friendly to the gaming community and they engage with them frequently. This is something that needs to be more of a common occurrence with the video game industry.

Don’t Get Cheap On Me, Dodgson

It seems that Instinction will have an open-world format that will be broken up into biomes. This is a popular design that developers are utilizing with next-gen IPs. One game, in particular, that is using this format is Atomic Heart. Each biome is a new segment of the world that introduces an entirely new landscape and threats. Chances are that this title will have a Metroidvania flavor to it. Players will need to obtain a distinct tool, skill, or key to enter these biomes. Thorough exploration and backtracking will be the norm for this adventure. There will also be underwater caverns to traverse. Players can try their luck and swim through it while holding their breath, or they can find a ventilator to make things easier. Needless to say, there were quite the formidable aquatic beasts during prehistoric times that will most likely be bumped into.

Luckily, there will be a vast selection of weapons to select in Instinction. Everything from rocket launchers, sniping rifles, SMGs, and even melee weapons can be snatched up. Right now, it is not clear how practical the inventory will be. Will players be able to carry multiple weapons like the Doom Slayer, or will they need to constantly switch out weapons like in Battlefield? Ammunition won’t be raining from the heavens to collect, but it won’t exactly be stingy, either. Thus, there will also be a multitude of attachments to use for the weapons, all of which can be switched out. There will be a slew of missions and side-missions to complete during this journey. It will be essential to know which particular firearms will only be suitable to complete them. If a mission is indoors with branching corridors, then a shotgun might be in order. If a task is out in the open field, then sniping might be a good idea. Each segment of the game will require constant tactical planning to outwit the dinosaurs out there. On top of that, each biome will have dynamic weather patterns that will periodically change. Which, in turn, will force players to evolve their combat on the fly.

There is still some work to be done with this game. From the looks of it, it seems to know what it wants to be and it’s on track. A good old-fashioned dinosaur adventure is long overdue. It looks like that Instinction might have what it takes to quench the thirst of a Dino Crisis drought. There is still some work to be completed on this title and it is scheduled to drop on September 2022. Instinction will be available on the PC, Nintendo Switch, PlayStation, and Xbox upon release.