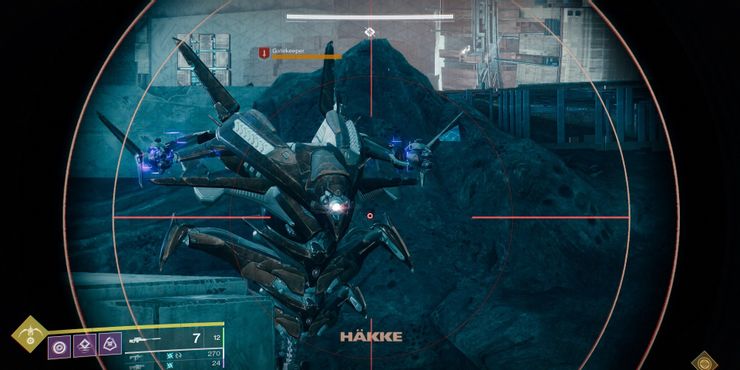 Vault of Glass has been back in Destiny for a few days now and that means there will be a flood of Destiny 2 content everywhere, including YouTube, and I highly suggest taking a look at some of those videos (Rick Kackis, Datto, and Fallout are excellent as always!) I, on the other hand, am here to bring you a brief rundown of what you can expect from this raid if you prefer to not watch a video and maybe just like reading? The point is whichever method you choose to learn how to do the raid, everyone has their own preferred method and I’m here to add another one to that list. So, how do you complete the Gatekeepers encounter in the Vault of Glass?

Let’s talk about the loadout that should bring into the Gatekeepers encounter: there will be Overload Champions, so you’ll need either Overload Hand Cannon or Overload SMG. My suggestion is to use Overload Hand Cannon as it seems to be a bit more consistent over Overload SMG, and you won’t need to do much ad clearing with your Kinetic weapon, since I also suggest bringing in Salvager’s Salvo. The breech Grenade Launcher “Salvager’s Salvo” is perfect for clearing out mass amounts of enemies, especially with the perks Ambitious Assassin and Chain Reaction. I spent most of this encounter with this Grenade Launcher equipped and just continued to pop groups of ads left and right. It will be very important that you have some Grenade Launcher ammo perks equipped though, as you’ll run out of ammo pretty quick if this is the choice you decide to make. For our choice of Power weapon, everyone in my team that had it ran the Exotic Rocket Launcher “Deathbringer” (especially if you have the catalyst!) While it’s not absolutely necessary to run these weapons specifically, you’re definitely going to need an Overload mod, and something to clear out a bunch of ads and some chunky Wyverns.

To start the encounter you literally just have to walk up to – or shoot – the Vex that are all around the arena, so if you’re not ready to start then don’t shoot anywhere in the arena. Make sure that everyone is rallied first, and split up into two teams of three. One of your teams is going to head over to the left side of the arena where there will be a Vex portal and a plate, and the other team will do the same thing on the right side. Start the encounter and a Gatekeeper will spawn, kill the Gatekeeper to allow the first 2 players to enter the portals on each side of the arena.

If you are not in the portal…

If you are in the portal…

If you are the first one in the portal, you’ll need to check the back of the room where the enemies spawn to see if you have a Minotaur or a Wyvern. Make sure to call this out to whoever is holding the relic, so they know which portal to enter first. If the Minotaur spawns on left, then the relic holder will go into the left portal, and then it will rotate to right, and so on and so forth. If you have a Wyvern on your side, you need to make sure to kill this as soon as you can; this is where Deathbringer comes in handy as you can take down one of these Wyverns almost instantly. I also just use my Stasis subclass to freeze them before they can get close to the Conflux; this prevents them from being able to sacrifice themselves and wipe your team. As soon as the relic holder kills the Minotaur and drops the relic, pick the relic up and hop on out of the portal and give it to the next person who will go into the other portal.

If you are holding the relic…

Make sure to listen for which side the Minotaur is on first, then go into the portal and take down the Minotaur shield (you can only do this with the relic, so don’t drop it), then drop the relic after you’ve killed the Minotaur. You are now tasked with staying in the portal and clearing ads as quickly as you can, until someone else comes in to hand off the relic again.

You’ll need to do this until you see a popup in the bottom left of your screen, beginning the final phase of the Gatekeepers Vault of Glass encounter.

Everyone exit the portals and rush into the middle of the arena where a big Conflux will appear; your goal is to protect this from a massive amount of enemies that appear from all sides. Just wipe them all out with a couple of Deathbringer shots, some Supers, and Salvager’s Salvo, and then you’re done. The Gatekeepers Vault of Glass encounter is over. Collect your loot and wait to begin the final encounter: Atheon.